He was speaking of the 30 very impressed guests he took on a Trolley Towns Tour during the May national conference of the National Trust for Historic Preservation. The conference is held in cities all over the country and this year, Pittsburgh played host. Milliron, was on the organizing committee.

The conference presents an opportunity for people who have jobs similar to Milliron’s to hear from experts in the field and learn about best practices when it comes to revitalizing their historic downtowns. Pittsburgh was an ideal spot for the conference, especially since East Carson Street was one of the first urban main street programs in the country.

The conference was as helpful to small towns as to larger urban areas and covered preservation topics such as zoning, event management, financing projects, placemaking and how to run nonprofit companies.

Milliron’s tour started at the Gateway T station and wound through Beechview, where participants discussed projects by the Urban Redevelopment Authority and Atlas Development. It proceeded through Dormont, where the Potomac Avenue renovation was the topic, and stopped in Mt. Lebanon, where everyone walked through the Uptown District.

Participants heard about our transit-oriented development proposal for Shady Drive East, which was scrapped due to high cost. But they also talked about ways to integrate the LRT station on Parse Way into the business district. They then shopped in Uptown, where Commonwealth Press was a particular hit.

The tour finished up in Castle Shannon before concluding at Mindful Brewing.

Milliron says the group was full of compliments for Mt. Lebanon. Of special note was our architecture, our forward-thinking planning, such as integrating retail into the north parking garage, as well as our vibrancy. 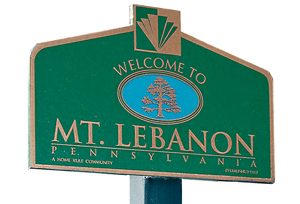 ENTRY SIGN POLICY Mt. Lebanon is known for its distinctive neighborhoods. Now, residents of subdivisions with traffic islands at the entry can make their neighborhoods even more distinctive, by designing and posting an identification sign.

A neighborhood must meet numerous criteria and receive Commission approval before an identification sign can be put in place. The Commission passed an ordinance adapting the municipal code to permit signs on neighborhood traffic islands. A new entry sign policy referred to in the code details the requirements.

The Commission decided to consider changing the ordinance as the result of a request from Lebanon Hills residents to erect a sign in the traffic island at Lebanon Hills Drive. Those residents told the historic preservation board, which along with the planning board recommended the change, that they wanted a sign similar to but not exactly like the iconic Mission Hills sign. The Mission Hills sign, along with others such as the Cedarhurst Manor, Hoodridge Hilands and Main-Line Mt. Lebanon signs, were paid for by the developers of those subdivisions, not by the municipality.

The new sign policy is based in part on the process the Lebanon Hills planning committee, led by Realtor Faith Williard, completed before approaching the historic preservation board. Their committee gained written support for the project from the majority of their neighbors, obtained pledges to fully fund the sign and had a professional architect, George Perinis, design it. In addition to including those procedures, the sign policy also specifies appropriate materials, size and placement for the signs, mandates that the neighborhood pay for ongoing maintenance and addresses other design, cost and safety factors.

Prior to changing the ordinance, Ian McMeans, assistant municipal manager/planner, worked with municipal staff to define correct boundaries for every Mt. Lebanon neighborhood so that only the people living in the neighborhood would be asked to approve or contribute to the cost of the sign. (Everyone in the neighborhood does not have to pay for the sign; it simply needs to be paid for). The result is a new colorful map, developed by GIS coordinator Michael Meseck, that includes the real names of all subdivisions, some of which may be news to the people who live there.

Quality signs—which is what our ordinance will ensure—can cost thousands of dollars, so we might not see a plethora of new signs soon. Still the policy and ordinance are now in place, and as our officials have learned over the past 105 years, it’s always best to “be prepared.”

NATURALLY CLEAN, a cleaning service that uses organic, environmentally friendly products, has opened a retail store on Overlook Drive in the Beverly Road Business District. Owned by Rachel and Curtis Radke, Naturally Clean has been in business since 2012.

“About 90 percent of our business is residential cleaning,” says Rachel. “This store will be a boutique that features a lot of our products.” 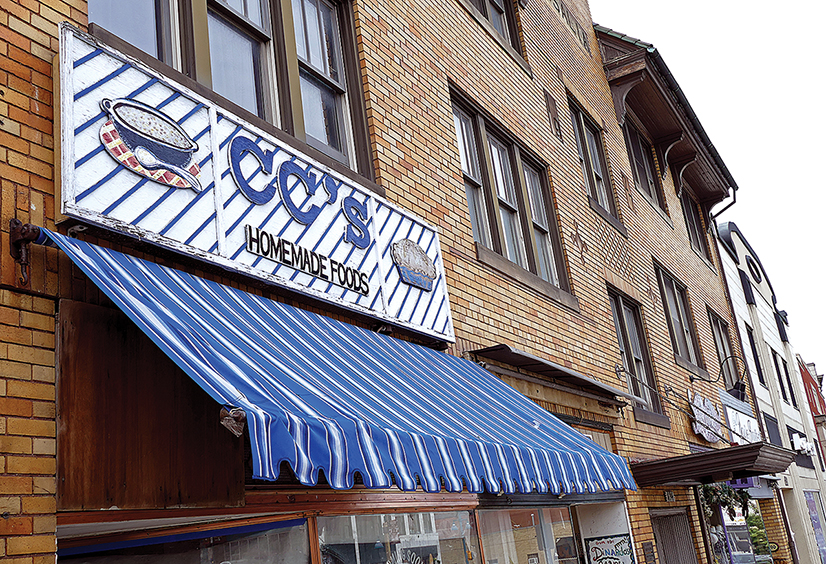 THANKS FROM CC For the last 35 years, CC’s Homemade Foods on Washington Road proudly served the Mt. Lebanon community, providing homemade food favorites in a friendly atmosphere. Sadly, back surgery required that owner/manager Carolyn Christian close the restaurant in order to devote her time to recovery and regaining good health. She asked us to share a message with the community, which we are happy to do:

Says CC, “I developed many friendships and loyal customers over the years, and it was my privilege to serve you. Many thanks to all of my customers, staff and Mt. Lebanon. Thank you for being a part of CC’s Diner over these many years. I wish you all the best and hope to see you again.”

Good luck, CC. The mtl staff, along with your other customers, will miss you and also your yummy chicken dumpling soup!