PROMOTING TRAFFIC SAFETY UPTOWN In the first 15 minutes of the first day of Mt. Lebanon Police Department’s pedestrian safety Initiative, a bicycle officer chased and stopped a car that did not yield to a pedestrian. The driver was arrested for DUI and possession of drug paraphernalia. Not a bad first day.

Half the program involves placing officers on bikes in the Washington Road business district. In addition to citing offending drivers, officers are issuing warnings and educating pedestrians who violate safety laws. They also are thanking people for using the crosswalks and rewarding children who use crosswalks with Mt. Lebanon Police stickers and coupons for free Slurpees from 7-Eleven.

The other half of the program is nicknamed the “Frogger” detail, after a video game of the same name in which a frog tries to cross a busy street without getting run over. Plainclothes officers cross in the crosswalk, while unmarked cars stop drivers who fail to yield right of way to the officer and pedestrians.

“All in all, reception has been pretty positive,” says Lt. Mark Rayburg, head of the traffic unit, of the feedback officers have been getting since the enforcement program began in August. “People will say to our officers, ‘I’m glad you’re doing this.’”

The push is the result of a $43,690 public safety grant from the Pennsylvania Department of Transportation (PennDOT). Mt. Lebanon is one of seven departments statewide to receive funding from the grant. The enforcement initiative is the next step in a process that began two years ago with the LookUp Lebo campaign, which included street banners,  safety tips in mtl, and a video produced by Mt. Lebanon’s public Information office.

Mt. Lebanon has 15 officers who are trained and qualified by the International Police Mountain Bike Association. The timing of the grant coincided with the first days of school, which always sees expanded traffic enforcement. Officers working the overnight shift remained on duty for an hour or two past their usual 7 a.m. end-of-watch time. This is something the department does every year, not in conjunction with the grant.

In addition to state regulations, Chapter 10 of the Mt. Lebanon Code requires pedestrians to use crosswalks on Washington and Beverly roads and to cross at right angles to a curb except in crosswalks. They cannot cross the road when facing a steady or flashing “Don’t Walk” signal.

“Crosswalks are not used for traffic calming,” says Rayburg.

Following the enforcement initiative, the final phase of the project will be to update and improve signage, including signs with a new logo for the Look Up Lebo campaign.

The newest and most effective style of crosswalk marking is the white-striped “piano” style. Those markings will be in more crosswalks, along with ADA improvements and synchronization of the traffic signals along Washington Road.

Throughout the campaign, the department will divide its time between drivers and pedestrians.

“In pedestrian-vehicle crashes, the fault is generally 50-50,” says Rayburg. “We’re not trying to pick on any one group.”

MORE CONDOS? MAYBE NOT If you’ve been wondering what happened to the 400 Washington Road condominium project that Zamagias Properties was to have built across from St. Bernard Church, you’re
not the only one. Mt. Lebanon Commission has had two recent updates from Zamagias Development about what has stalled the project, which has been in the works now for 10 years.

Litigation with an adjoining private property owner has halted progress on the project, Dave Martens of Zamagias told the Commission at the August 27 meeting, and so far there has been no resolution from the courts.  Even if the court rules in the developer’s favor, Martens said,  Zamagias would need to revise and resubmit its  plan, in effect beginning the process all over again.  In the two years since the condominiums were initially marketed, he said, development costs have risen about 15 percent, making it impossible to create enough value to move forward.

As a result, Zamagias is looking at other options, including considering offers from other developers to purchase the property.  If that should happen, Martens said, the deal would take about a year to close.

One of the challenges for several developers who have attempted to build at the corner of Bower Hill and Washington roads over the past two decades is that that area is zoned for high-density residential. That means townhomes—which according to Martens are cheaper and easier to build and also more popular with the public—are not a permitted use.  Apartments would be permitted, but getting rents high enough to make building them worthwhile is not possible, Martens said: “I would love to do apartments, but it is prohibitive. We would need to get rents like they get In East Liberty and the Strip District and we would need LERTA (an incentive program by which commercial sites can be improved without having to pay the full tax increase from these improvements).

Commissioner Kelly Fraasch, who represents Ward 5 where the condos are proposed, expressed her disappointment with the lack of progress on a site that serves as the gateway to Mt. Lebanon. She said the corner, which was an eyesore even before Zamagias became involved,  was one of the things that provoked her to run for commissioner seven years ago.

“We are on the same page,” Martens said.  “The market is telling us that maybe this [condos] is not the right product, so we are exploring other options, considering the zoning, to see what is viable and to come up with a solution.”

MEETINGS 101 Recently there has been some confusion about the types and structure of commission meetings. The adjourned meeting begins at 8 p.m., and includes a section for citizens’ comments. Comments are limited to Mt. Lebanon residents, and each commenter has five minutes to speak. The adjourned meeting is preceded by the commission’s discussion session, which is open to the public but does not have a section for citizens’ comments. Agendas for both the adjourned and the discussion meetings are published in advance of the meetings on the Mt. Lebanon website.

COMMISSION MEETING DATES TO CHANGE Beginning in 2019, the Mt. Lebanon Commission will meet on the second and fourth Tuesday of each month. Mt. Lebanon is making the change from the current meeting plan—one meeting on the second Monday and one meeting on the fourth Tuesday—to make for a more accommodating schedule. Discussion sessions will be at 6 p.m., in Room C of the municipal building, 710 Washington Road, and the adjourned meetings will begin at 8 p.m., in commission chambers. 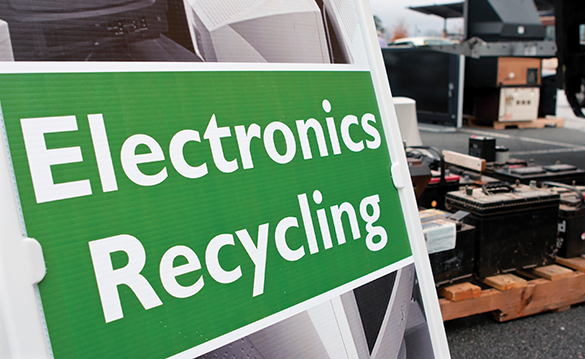 ELECTRONIC RECYCLING Bring your old electronics to the Mt. Lebanon Public Library parking lot at 10 a.m., Saturday, October 20. Electronic devices such as computers, cell phones and televisions are not permitted in Pennsylvania landfills.

CyberCrunch will perform on-site hard drive shredding for a donation of $10 per hard drive. CyberCrunch personnel will help you unload your vehicle and remove hard drives from your computers. A portion of the proceeds will benefit the library. For a full list of acceptable items, visit www.ccrcyber.com/events/.

Cecily Franklin is the president of the Western Pennsylvania Mushroom Club. An incorrect name was listed in Mushrooms of  Mt. Lebanon.