ZONING CHANGES APPROVED What do you do in a tough economic climate to make properties more attractive to developers without sacrificing the charm and character of a neighborhood? That was the question commissioners brought to Mt. Lebanon municipal planner Keith McGill and the planning board. At issue are properties that abut Washington Road between Shady Drive East/West and Lebanon Avenue, an area that currently includes two zoning areas: middle-density residential (R-4) and the commercial business district (CBD). In some cases, the properties in the area include former single-family homes, such as those that housed the offices of the former Mt. Lebanon Parking Authority and the current South Hills Area Council of Governments offices, at 794 and 788 Washington Road.

McGill and the board both recommended tweaking the zoning a bit to allow some new uses without drastically changing the feel of the neighborhood. Commissioners agreed and voted unanimously in October to add what is called an “office boutique overlay district” to the area, to permit mixed residential and small-scale commercial uses, including offices no larger than 1,200 square feet. The plan had no major opposition.

Additional uses now permitted include studios for artists, craftsmen, photographers, composers and writers; art galleries, retail sales of antiques, art and art supplies, books, clothing, flowers and plants, handicrafts, home decorative accessories, jewelry, specialty foods and toys, barbers and hairdressers and offices, with the exception of medical offices, which are not permitted. Restaurants also were deemed too high-impact to be permitted in the designation. Since the district is called an “overlay,” the buildings may also continue to operate how they had been, as called for in either the R-4 or CBD zoning area, depending on the location.

The change also stipulates buffer areas that the businesses must have around the property for it to be allowed to operate. It is not the first such overlay for Mt. Lebanon. In the 2005 rewrite of the zoning code, McNeilly Road, between McCormick Lane and Pearce Road, also has the overlay and is subject to the same requirements. 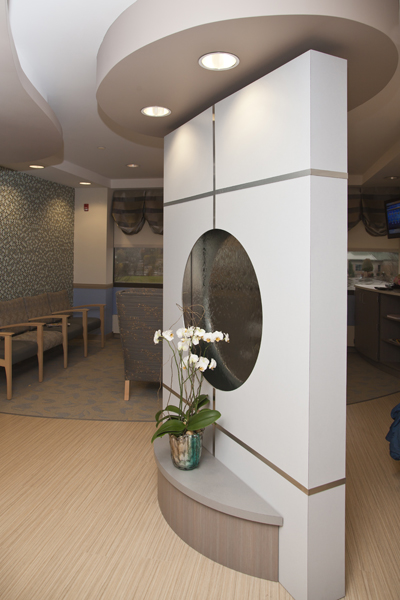 BREAST CARE CENTER OPENS The 6,000 square-foot, $2.5 million St. Clair Hospital Breast Care Center at the outpatient center in Village Square opened this fall to acclaim, thanks in part to its state-of-the-art imaging center with digital mammography and new 3D equipment that produces images in “slices” similar to a CT scan. Patients may make appointments when radiologists are present to read images immediately instead of waiting nervously for days for results.

Should an image require further examination, patients can have an ultrasound in the same suite or go downstairs for an MRI. Biopsies are available en suite, and should it turn out to be breast cancer, patients can meet with breast surgeon Raye Budway in the consultation suite or exam room. A “nurse navigator” is available to schedule surgery and otherwise escort the patient through the next steps, whatever they may be. All the while, the patient is treated to a soothing environment replete with waterfalls, soothing music, softly tinted wood trims, a private waiting room and changing suites.

“I know if I were a patient, that’s what I’d want,” Patsy Thompson, surgical breast care coordinator, says of the combination of technology and amenities. Plus the one-stop nature is a time-saver. “If you work it really helps,” says Darrie Cosban, supervisor of radiology. Appointments: 412-942-3177.

TOOLS TO BUILD SKILLS Learning Express at The Galleria has Skill Builders, a line of 70 toys that help children with special needs improve their language, speech, motor and other skills. The in-store and online resource offers parents, professionals, friends and caregivers toy suggestions to help children reach their developmental goals. For more information, call (412) 341-TOYS (8697).

SEWAGE BILL CHANGES For more than a decade, Mt. Lebanon residents have been paying for their water and sanitary sewer usage together in one bill sent from Pennsylvania American Water Company. But starting last fall, the water company discontinued billing for sewage. The sewage portion of your water bill now is separated out and is collected by Jordan Tax Service. Sewage use rates are unchanged. You will just be getting two smaller bills—one for water and one for sewage—that total the same amount as your previous water bill.

Do not confuse your sewage bill with the storm water bill sent quarterly from Jordan. That fee also will be unchanged.

If you do not want to mail the sewage bill to Jordan, you may drop it off during normal business hours at the customer service center in the municipal building, 710 Washington Road.