Concerned about traffic? So is the Mt. Lebanon Traffic Board. The board investigates citizen concerns about traffic and makes recommendations to the commission to improve traffic conditions.

If you think you have a problem on your street—speeding, a need for a stop sign, for instance—the first step is to request that the board and traffic engineer evaluate the situation and, if warranted, recommend a solution. Residents can present their concerns during the traffic board’s regular meeting at 7 p.m., the first Wednesday of each month.

The traffic board also is the first step in implementing major neighborhood traffic calming measures such as speed humps and engineered changes to the roadways.  There are, however, requirements to qualify for consideration. The request must be accompanied by a petition signed by residents from at least 20 households in the immediate vicinity of the location of concern. That number can be waived if the target area affects fewer than 20 households.

Once the request is submitted, the Mt. Lebanon Police Department’s traffic unit will conduct a study of the area. Based on the results of the study, the traffic board determines if the request should be further evaluated and if the location is eligible for consideration, depending on whether the area meets or exceeds one of three criteria listed in the Pennsylvania Traffic Calming Handbook: Average weekday traffic volume; 85th percentile speed (the speed at or below which 85 percent of vehicles travel on the road), and highest one-hour traffic volume on an average day. 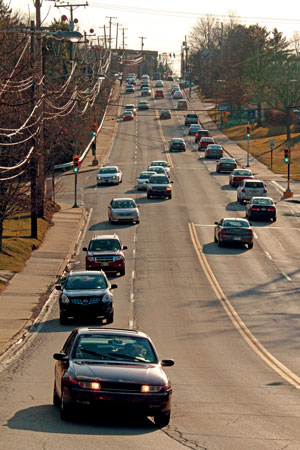 Streets are classified as either local or collector streets. Collector streets, such as Cochran and Bower Hill roads, are the conduit between local streets and arterial roads, such as Route 19. Threshold volumes for local streets are: 2,000 vehicles per day; 85th percentile speed of 7 mph above the posted speed limit; and a highest one-hour traffic volume of 200 vehicles.

Volumes for collector streets are: 5,000 vehicles per day; 85th percentile speed of 7 mph above the posted speed limit, and a highest one-hour volume of 500 vehicles.

The traffic board assigns a point value to the area in question, based on the study’s results—one point for every 200 vehicles over the daily limit for local streets, (250 for collectors) or one point for every 20 vehicles (for local streets) or 25 for collectors over for collectors, whichever of these two point totals is greater; and one point for each mile per hour over the speed limit threshold. If the point total is zero, the board will recommend that no action be taken. All requests with a point value will be considered eligible for a traffic management plan and will be prioritized according to their scores.

The board categorizes traffic management projects as either speed- or volume-related. Once the list is compiled, the municipal manager or commission decides which plans to develop.

Once the board determines that an area may need traffic calming, the next step is a public meeting with residents, the municipal staff, the traffic board and the municipal traffic engineer. The commissioner for that ward is  also is invited.

Once the area is defined, additional traffic data may be needed before proposing a traffic calming solution, such such as speed humps, realigned intersections or a center island. But before a solution is recommended, a number of factors need to be considered, such as the steepness of the road’s slope, any drainage issues that may result and the impact the changes would have on emergency response and snow removal.

One important factor the board considers is whether a “remedy” might just shifts the problem a few streets over.

Once the municipality is ready with one or more solutions, the next step is a public meeting to present the options and receive input. The goal of this meeting is to reach a consensus on the best way to move forward. The municipality will present cost figures attached to each proposal. If no consensus is reached, there may need to be another meeting, or the request could be returned to the previous step in the process. If everyone come sto an agreement, the next step would be to prepare a final, more detailed cost estimate, scope of work and schedule for proceeding, which would be presented at the next traffic board meeting. Once the board signs off, it recommends the entire package to the commission.

The commissioners can approve the plan, amend it, vote it down, table it or send it back to the traffic board for further consideration.

Once the plan is approved, the commission will decide if funding is available in the current year, or if the project needs to be deferred.

After any traffic calming devices are installed, the next step is to gather data on how well the changes are working to calm traffic.

If you would like to get on the board’s agenda, email Lt. Mark Rayburg, staff liaison to the traffic board, at mrayburg@mtlebanon.org. Please include your name and general information regarding your proposal.