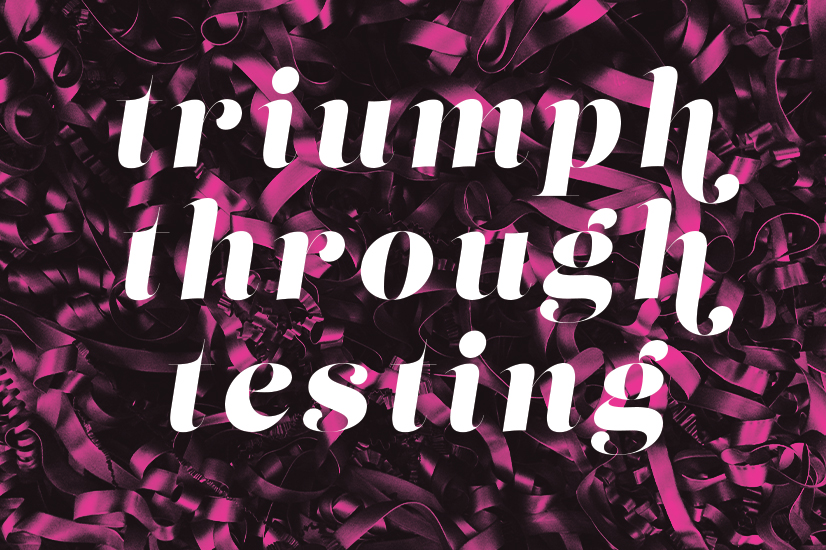 Nearly one in eight women in the United States will develop invasive breast cancer over the course of her lifetime. A woman’s risk of getting ovarian cancer is much smaller, at one in 78. However, both of these statistics increase when certain mutations are present in a woman’s DNA.

“It’s a lot to handle,” says Giometti. “For me, I want kids eventually … But the current recommendation is that a woman has her ovaries removed, if she’s the right age.” Some also elect to do preventative double mastectomies.

Giometti became a strong candidate for genetic testing after her mother’s cousin developed breast cancer and tested positive for a BRCA1 mutation. Her mom, Marlene, was quick to get screened after that, only to find that she also carries the mutation—she had her ovaries removed as a preventative measure.

Several women in Giometti’s family had experienced breast and ovarian cancer—enough for her to decide to be tested for the BRCA1 gene. She reached out to her PCP, who scheduled a simple saliva test and six weeks later she found that she had the gene.

Modern tests screen for mutations in the BRCA1 gene, the BRCA2 gene—which increases a woman’s risk of contracting breast cancer to 49 percent and ovarian cancer up to 27 percent—and a series of SNPs, which are more recently-discovered mutations in chromosomes that are linked to a higher breast or ovarian cancer risk.

“The biggest ones are BRCA1 and 2, but right now more research is being done on a lot of different genes,” says St. Clair Hospital OB/GYN Dr. Kristen Peske, who works with patients daily to help identify whether they should be screened. “There could be other genetic mutations out there that just haven’t been identified yet. It’s unfolding as we speak.”

At her practice, she feels she is on the “front lines” when it comes to encouraging women to be tested. Each patient fills out a family history questionnaire when they come in for the yearly exam, which helps her flag warning signs. For example, if a close relative has been diagnosed with breast or ovarian cancer at a young age (under 46), that is a strong indicator. Other factors include ethnic origin—people of Ashkenazi Jewish descent are 10 times more likely to carry a mutation. Past cancer diagnoses and instances of breast cancer in men in the family are other flags.

Men with the BRCA2 mutation also carry a higher risk of contracting breast cancer at 8 percent, rather than the standard statistic of less than 1 percent. BRCA1 mutations are worth investigating for men as well, because they can lead to a higher risk of prostate cancer, skin and digestive cancers.

“We can do the genetic testing right in our office, same day,” says Dr. Peske. “Some may choose to see a genetic counselor before or after the test. Where we are probably more generalistic in our genetic screening, [counselors] will thoroughly review family history going back generations. And they can help you understand how [your DNA] will affect you and your children.”

Luckily, even if you test positive for one of the genetic mutations that lead to breast or ovarian cancer, modern technology makes it possible to stay ahead of a cancer diagnosis. While it is commonly accepted that 40 is the age to begin screening for mammograms in women, if you are at a higher risk, you can schedule mammograms or MRIs every six months, which would likely detect breast cancer before it becomes too advanced.

“The breast cancer part I’m not too scared of,” says Giometti. “I get an MRI every year … actually, this year they saw something suspicious, so I had a biopsy. It wasn’t terrible, but not enjoyable, either. The hardest part is the in-between time—the waiting and worrying. But it came back fine.”

For Giometti, ovarian cancer feels like more of a threat. Since having her ovaries removed is not an option she would like to explore right now, she relies on the CA125 blood test for early detection, but she feels the margin for error is large.

“The CA125 is a standard blood test, not a screening test. There really is no screening test for ovarian cancer, but it’s the only test we have. And that’s usually just for patients with genetic mutations,” says Dr. Peske, who also recommends regular ultrasounds as a possible screening method for people with the BRCA1 mutation.

In an effort to fight her anxieties about developing ovarian cancer, Giometti devotes her free time to organizations that help fund ovarian cancer research, such as the Ovarian Cancer Research Alliance (OCRA).

“I feel like I need to get the word out about these genetic mutations and ovarian cancer, in case there are other families who also are dealing with this and are overwhelmed,” says Giometti. After her diagnosis, she also became involved with Bright Pink, which offers resources for women with the BRCA mutations.

“They have a mentor program and connected me with a woman in my area who also has the mutation,” says Giometti. “We talked through her experience, and it was so helpful to me.”

Giometti is happy to align herself with Bright Pink, because she believes in their mission—to empower women to assess their cancer risks and manager their health proactively. “At the end of the day, knowledge is power. I understand it’s incredibly scary to have a definitive diagnosis, but there are firm enough steps to help protect your health that it is definitely worth knowing.”

A note from the writer

When my editor asked if I would be interested in writing this story back in May, my mother was sitting in a waiting room in Bethel Park, about to have a biopsy after a series of suspicious mammograms. Given the circumstances, and knowing that regardless of the result, my mom was likely to get tested for the BRCA mutations—I figured it wouldn’t hurt to learn more about the genes, the testing process, and the cancer that has afflicted so many women in my family.

Unfortunately, I’ve had cause to learn way more about it than I would have if I were just researching for a story.

A week later, I stepped out of an edit meeting to receive the tearful phone call. “It’s cancer,” said my mom, with absolutely no preface. My heart dropped. But the more I listened to her report, the more optimistic I became. The cancer was called DCIS (Ductal Carcinoma In Situ), which is a pre-invasive cancer in the cells that line the breast ducts. It’s often considered Stage 0.

Thus began the process of coming to terms with, and overcoming, a cancer diagnosis.

Initially, my mom took one foray into the terrifying realm of WebMD, before she realized it was only helpful at inducing panic. Then, she found a more constructive method of research—she began calling relatives from her grandma’s side of the family and mapping the victims of the disease. She was tested for genetic mutations shortly after the diagnosis, but the results would take time, so this helped her cope while she waited. She waited for the BRCA results … Then for the doctor … Then for the surgeon … And again for the surgeon. Each meeting was weeks apart, and it was slowly chipping away at her sanity.

As it turns out, my mother does not carry any of the genetic mutations associated with breast cancer. She did not find that out until the week of her already-scheduled surgery, but it didn’t change her mind. She was given two options: the “easy” route was a lumpectomy plus 20 rounds of radiation, the route she chose, which almost guaranteed she would not have to worry about breast cancer again, was a double mastectomy.

I’m immensely relieved to report that, as I write this, my mother is two weeks post-surgery and experiencing only extreme soreness. The doctor removed her drains yesterday, her reconstruction begins in earnest in a couple of weeks (she was luckily able to have some basic reconstruction as part of the initial mastectomy surgery), and, most importantly, the post-surgery biopsy revealed no suspicious cells beyond what was expected. She’s completely cancer-free.

It may have been the worst five months of my mother’s life, but all of us can now look back on it with gratitude. First of all, we can be thankful that it was such a manageable diagnosis, which allowed her to begin reconstruction right away. We’re also glad that she did not require any additional treatment beyond the mastectomy. Mostly though, we’re thankful at how early it was caught—and that my mom made and kept her initial mammogram appointment, back in April.

“The mammogram is what found mine—it wasn’t a lump,” she says. “You grow up learning to look for lumps, but with early ductile cancer, there are none. No one ever mentions to you that there are certain cancers that can’t be caught that way.”

It’s also worth turning your attention to the research she conducted on my Great Grandma Kate’s side of the family tree—the one with the most instances of breast and ovarian cancer. As you will see in the diagram above, a substantial number of women in my family have been affected, yet both my mother and her cousin have been tested to confirm they do not carry any genetic mutations.

Like Dr. Peske said, it could be that, somewhere in my family’s DNA, there is a genetic mutation causing this pattern that science hasn’t discovered yet. Or it could simply be coincidence.

Either way, for me, the message is clear: Cancer can affect anyone. Luckily, nowadays, some of the deadliest cancers can be caught before it’s too late, thanks to advances in screening technology. So as long as we are vigilant, we may be able to stay one step ahead of this epidemic. A mammogram or a simple blood test just might save your life.