No trolley adventure is complete without exploring the end of the line. For today’s stop, it’s time to discover exactly what sits at the last, most southern stop on the tour.  The Library Station (end of line) is part of the Pittsburgh Regional Transit (PRT) trolley silver line. Library Road traffic bustles just one street over as commuters unknowingly pass this stop and a history that few have learned.

If the Silver Line doesn’t sound familiar to you, there’s a reason. Previously known as the Blue Line, PRT changed up the color-coding system in March 2020. The end of the line hides just behind Library Road and resides at the end of Brownsville Road, situated right next to the Montour Trail. This area sees a mix of trolley commuter traffic and those who take advantage of the nearby trail. 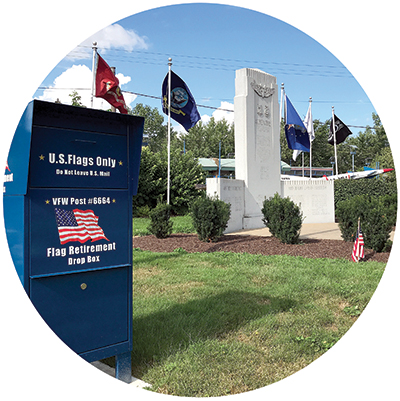 The moment you step off the stop, you’ll notice a large stone memorial sitting right across from the tracks. Dip into the history of the area and take a break at the memorial and read about Archie Mathies’ history.

Be sure to pack any American flag you’re struggling to figure out how to properly discard. Situated within the same space as the memorial, you’ll see a flag collection box where you can deposit any old, unwanted flag that was sitting around in your house.  Rest assured; your flag will be discarded appropriately.

Rewinding back to 1944, and jumping into the throes of World War II, you’ll be transported to Mathies’ heroic actions. Serving as engineer and ball turret gunner on a bomber aircraft, Mathies and the entire crew faced an attack from the enemy, leaving the copilot dead, a bewildered crew, and the pilot severely injured and unconscious.

The surviving crew hobbled the flight back to their station but no one knew how to land the plane. Though ordered to parachute to safety, Mathies and a surviving navigator refused to abandon the plane and attempted to land it to save the injured pilot. Unfortunately, after three failed attempts, the plane crashed and no one survived.

Archie Mathies received the Congressional Medal of Honor for his heroic attempt to land the damaged plane. The area’s rich history ties Mathies’ valiant story to the area’s coal mines. Local coal mining companies found this story worth memorializing and United Mine Workers of America Local 73 and District 5, and friends and fellow employees of Pittsburgh Coal Company funded the stone structure. 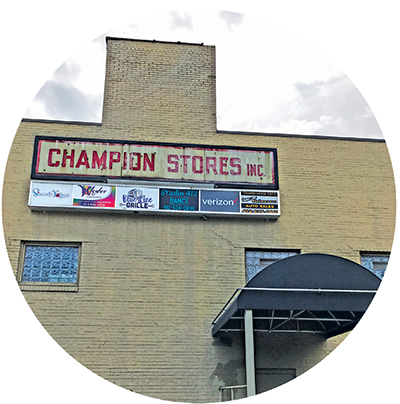 After leaving the memorial, make your way to the building just adjacent to it and examine the seemingly plain back of the building.

Treat this like a scavenger hunt of sorts and see if you can spot the Champion Stores, Inc. sign. This probably won’t serve as much as a challenge as it’s a sizable sign and it rests perched right above a blue awning.  That sign holds significant history to it and ties into the memorial.

Before all of the local businesses took up residence in the building, the entire space operated as a company store for the local coal miners. Though the building has seen countless tenants since then, the sign and history remain.

During their heyday, coal mines sprawled around our area. Instead of cash, the coal companies paid miners in scrip, which was only redeemable at a company store, creating a monopoly that often bound the miners to the company for a lifetime. 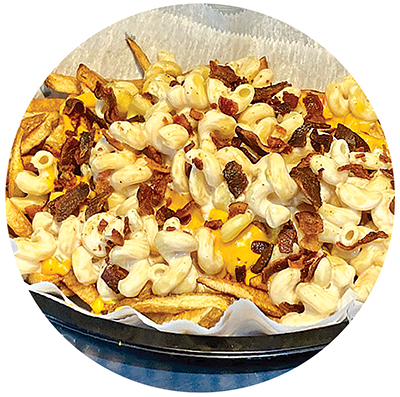 Taking in history works up a mighty hunger. Just a short walk away, and in the old Champion Stores building, you’ll find the Blue Line Grille to rest your feet and grab a bite. Owners Tony DeMartino and family opened this restaurant in 2020.

One of DeMartino’s goals is to focus on serving local trolley commuters and those using the Montour Trail. Additionally, the Blue Line Grille works with local sports teams to provide favorite fare at games and events.

Be sure to order their signature Mac Daddy Fries (smothered in cheese, bacon, and mac and cheese)! This is a dish you won’t find anywhere else. If you order onion rings or fries, make sure to ask for their in-house zesty sauce. Add a specialty burger or All American Sub (in DeMartino’s father’s memory) for your main dish and you’ll leave content with a full belly.

If the food has you hooked and you’re looking for a place to work, The Blue Line Grille is always open to hiring food lovers! 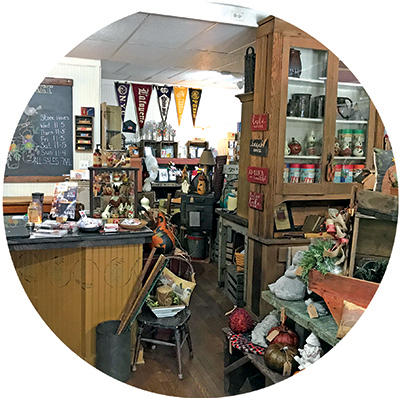 Before heading back on the T, walk off your lunch and stop at The Leaning Bucket to peruse several rooms of antiques and unique locally made home items. Owner Kellie Rebhoz opened this store brimming with treasures just three years ago. It debuted after her husband opened McMurray Garage Doors and this space was included with the business. Rebhoz grew up surrounded by antiques and wants to share her passion.

Depending on the time of year, you’ll find seasonal one-of-a-kind decorations throughout the store. The store’s Facebook page updates followers on upcoming open houses and events.

Beyond antiques, this shop sells locally created crafts and décor from vendors throughout the U.S. Delight your nose by sniffing one of the candles crafted in Ligonier… or pick up an original magnet made in Michigan and shipped straight to the store.

Just when you think you’ve seen all of the offerings, you’ll stumble upon another room with antiques you can’t buy in a big-box store. While shopping you’ll feel like you’re exploring the nooks and crannies of a cozy home you’re visiting for the weekend.

Now that you’ve walked off your full belly, scarfed up some unique items, and dropped off a ready-for-retirement American flag, it’s time to head back over to the trolley stop and catch a ride home! The end of the Silver Line trolley stop holds a rich history and offers unique, small businesses. Spending a quick day out this way won’t disappoint.