n 2018 RBG, Three Identical Strangers and Free Solo each made over $10 million dollars at the box office. Won’t You Be My Neighbor? garnered more than $22 million. Documentaries have been on a meaningful trajectory since 1994 when Steve James made the provocative Hoop Dreams. Requiring miles of film and hours of editing, these tales of truth require patience and vision on the part of their creators. Frequently, as in Hoop Dreams, the ending is not predictable when the filmmakers set off on their investigative journeys. Many documentaries promote specific points of view. They may scare us with their passion or bore us with their statistics and talking heads. They all take us to new places. The following films are great stories, free of preaching, meant to enlighten and delight. 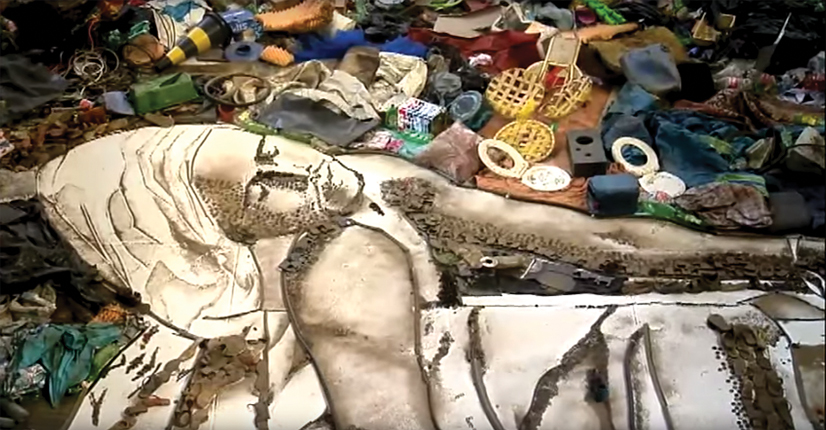 Photographer-artist Vik Muniz turns the mundane into the creatively quirky. Muniz delights in repurposing found objects such as wire, coins, spaghetti and dominoes. Inspired by Andy Warhol, he created Double Mona Lisa out of peanut butter and jelly. Lushly photographed, the image becomes a sensuous work of art. Muniz’s fascination with found objects merged with documentary film director Lucy Walker’s fascination with garbage. In 2007 the dump, Jardim Gramacho on the outskirts of Rio de Janeiro, became the stage for a unique artistic transformation and the documentary, Waste Land. Statistics abound. Covering 321 acres, Jardim Gramacho was the largest landfill in the world before closing in 2012. In 2007, it received 8,000 tons of garbage a day. More than 2,000 catadores, or pickers, worked in the dump, separating recyclables from the trash. Waste Land focuses on the developing relationship between Brazilian-born Muniz and a handful of catadores as they collaborate to create stunning works of art that will receive international fame. Photographed in a discarded bathtub, Tiao becomes Marat in David’s 1793 masterpiece, The Death of Marat; Isis, another catadore, embodies Picasso’s work-weary Woman Ironing. Suelem is a Madonna swathed in white holding her two children. To reveal the process of the art making and what happens to the individual catadores would ruin the wonder of this film. A cacophony of textures, shapes and colors in the forms of bottle caps, strips of film, broken toys, abandoned stuffed animals and discarded bling from Rio’s Mardi Gras celebration feature prominently in the storytelling. Garbage never looked so good. 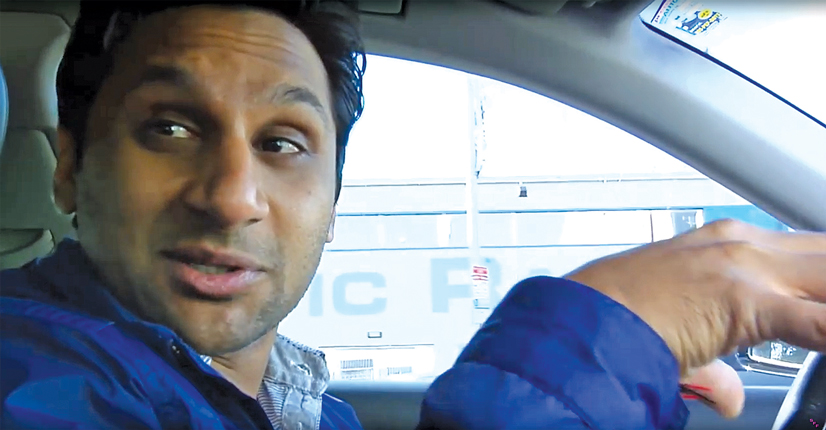 The summer of 2017 welcomed the refreshingly charming movie, The Big Sick. Starring Kumail Nanjiani and Zoe Kazan, this dramedy recounts the true story of how Nanjiani, a Pakistani comedian, fell in love with his wife, Emily Gordon. Written by Gordon and Nanjiani, the film received positive reviews and an Academy Award nomination for best original screenplay. The Big Sick delightfully and insightfully explores sensitive subjects such as cultural differences, assimilation and match making.

In 2015, Los Angeles-based Indian actor Ravi Patel and his sister, Geeta, a documentary filmmaker, explored some of the same territory in their autobiographical journey, likewise filled with cultural insights and laughter. Father Vasant and mother Champa are obsessed with matchmaking to find a wife for 30-year-old Ravi. After all, Champa and Vasant’s relationship is a testament to the success of arranged marriages. To complicate the search, only a woman from the huge Patel clan will do. The Patels invest time, money and energy to find the perfect Patel woman. Ravi honors his parents, and sincerely tries—Indian/American matchmaking sites, word-of-mouth fixups, an extensive dating trip to Toronto, Boston, Dallas and places in between. Ravi even attends a Patel Matrimonial Convention that resembled a business expo and speed dating venture. Throughout this journey, Vasant and Champa cajole, beg, bribe and plead. Some of the best conversations take place in the car because the clever parents know that escape is impossible.

Geeta wields the camera, capturing moments of family tension—at one point in the claustrophobic car Champa looks directly at Geeta’s camera and say, “Help us out. Help us out.” But love and humor trump tension, and Geeta captures the strong family bonds. Despite the intense parental pressure Vasant and Champa are endearing, charming and humorous. They may be nagging parents, but they are Ravi and Geeta’s much-loved nagging parents. Does Ravi find true love among the Patels? There is a twist to the tale.

PRODUCTION NOTES: This doc took a mere year to film and edit.

TRIVIA: Meet the Patels premiered at the Toronto Film Festival. Vasant cold-called all the Patels in the phone book. The line went around the block for two nights. Festival organizers stated, “We’ve never seen this kind of demand for a film.” Don’t mess with the Patels.

Dream Alliance, the star of Dark Horse, is Rocky of the racetrack. His journey exemplifies a host of storytelling clichés—the little engine that could—winning against all odds—mixed with a hint of Upstairs, Downstairs.

Jan Vokes wanted a thoroughbred racehorse. Like any persistent barmaid living in a tiny, depressed mining town in south Wales, she makes it happen. Jan convinces numerous members of the town to invest in her dream. They form an alliance and the horse with the perfect name, Dream Alliance, born in 2001, becomes the perfect town pet. Focusing on the training and nurturing of Dream Alliance, aka Dream, brings this struggling community together and creates and strengthens relationships. Dream’s heritage and upbringing doesn’t follow the traditional path. Class distinction explains why his journey was shunned by the elite world of British racing.

When British documentary filmmaker Louise Osmond learned about Dream Alliance in 2012 she couldn’t believe this true tale was untold. Osmond traveled to the south of Wales to the mining town of Cefn Fforest located in Caerphilly County Borough to piece together a story that began in 2000.

Dream’s world was documented in grainy archival photos and videos. To succeed in storytelling, Osmond recreated scenes that are seamlessly interspersed with interviews with Dream’s true cast of colorful characters. Osmond enticed villagers from Cefn Fforest to play younger versions of the alliance members rather than hire professional actors. The non-professionals bring fresh, lively charm to the documentary.

Think of Rocky Balboa, Billy Elliot and the Karate Kid. We all love to root for the underhorse. Dream Alliance is real. You’ll be gobsmacked.

PRODUCTION NOTES: The story was made into a feature film cleverly called Dream Horse, starring Damian Lewis and Toni Collette. 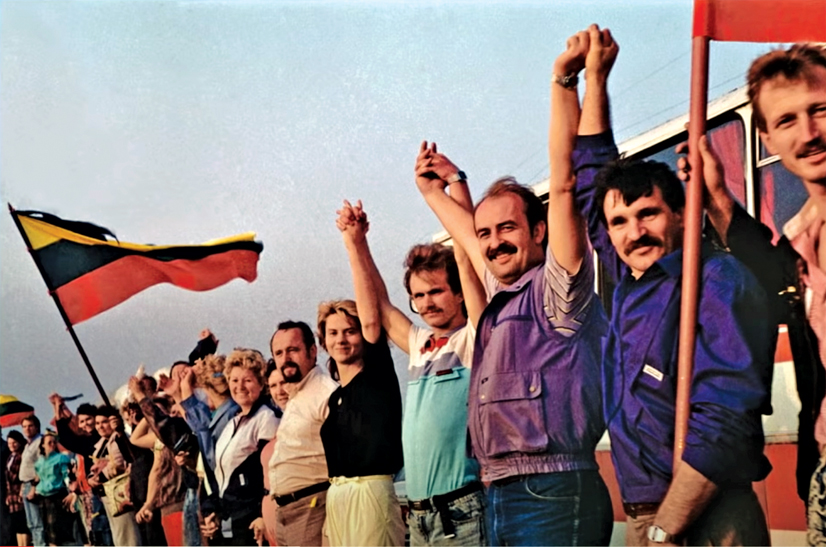 In 1988 and 1989 the world watched as Eastern Bloc countries mounted stunning civil resistance leading to the collapse of The Soviet Union. Polish shipyard workers went on strike; Hungarians dismantled a border fence that separated them from Austria and in Prague half a million peaceful and determined students demonstrated. In a unique rebellion against tyranny, Estonians lifted their voices in song.

Every five years since 1869, thousands of citizens of this small Baltic nation gather at the Tallinn Song Festival Grounds to celebrate their heritage with song and dance.

An independent nation during the 1920s, Estonia was battered senseless by the back and forth invasions of Hitler’s Germany and Stalin’s Russia. By the end of World War II one-fourth of the population was either exiled to Siberia, had fled the country or were murdered.

In 1940 Stalin announced that Estonia volunteered to become part of the Soviet Union. During the Soviet years the song festivals continued but the songs praised the wonders of life in the Soviet Union. And then in the 1980s the world changed. In 1988, for six straight nights at the festival grounds, the Estonians sang and sang and determined their future.

In 1999, filmmakers James and Maureen Tusty arrived in the capital city, Tallinn, to teach. They discovered that outside of Estonia, no one knew about The Singing Revolution. Four years of research, interviewing and editing resulted in a tale of intense political intrigue. The archival photographs and film clips, reaching back into the ’30s, are testaments to suffering and courage. Interviews with the original leaders of the independence movement—composers, singers, artists, political revolutionaries and future prime ministers—are enlightening and greatly enhanced by footage of their fiery younger selves in dynamic action. We know how the story ends but at the time these young women and men faced uncertainty and the force of Soviet tanks and guns.

The Tustys take a complicated story and uncomplicate it to show how the Estonians sound of music led to freedom.