assafras Street in Bloomfield is a winding, tree-lined passage that contradicts its city location. Tucked to one side, surrounded by greenery, a rustic wooden structure displays an abundance of iron creations. In this space, aptly called Iron Eden, Edward Avenue resident John Walter turns iron and steel and salvage into innovative designs. His public art is displayed along Banksville Road where his iron trellis enlivens the cement retaining wall adjacent to Crane Avenue. On the corner of Banksville and Helen Drive, his jaunty iron posies greet motorists.  John is the artistic blacksmith while his wife, Jody, keeps the business humming. With their son, Sailor, they have lived in Mt. Lebanon for 14 years.

In 2017, the Walters opened The Magarac Gallery and Gathering Space on Liberty Avenue in Bloomfield. A self-described iron and steel hoarder, Walter once stated, “I’ve never met a piece of steel I didn’t like.” He even rummaged through the basement of Pittsburgh History and Landmarks structures to find the perfect remnants. Named for the legendary man of steel, Joe Magarac, the gallery pays tribute to Pittsburgh’s industrial heritage and showcases Walter’s bold works created from salvage. Pieces of the Manchester Bridge greet customers in the entryway.  In one corner is a functional glass top table that utilizes salvaged steel pickets from the West End Bridge.  Surrounded by a riveted steel frame, a large copy of William Gropper’s 1947 painting, Magarac, dominates one wall. From this vantage point the mythic patron saint of steel workers oversees Walter’s industrial designs.

His works enliven our neighborhoods. They meander up the sides of houses, welcome visitors to gardens and beautify backyards. As you’re out and about in town, here are a few of Walter’s creations to admire. 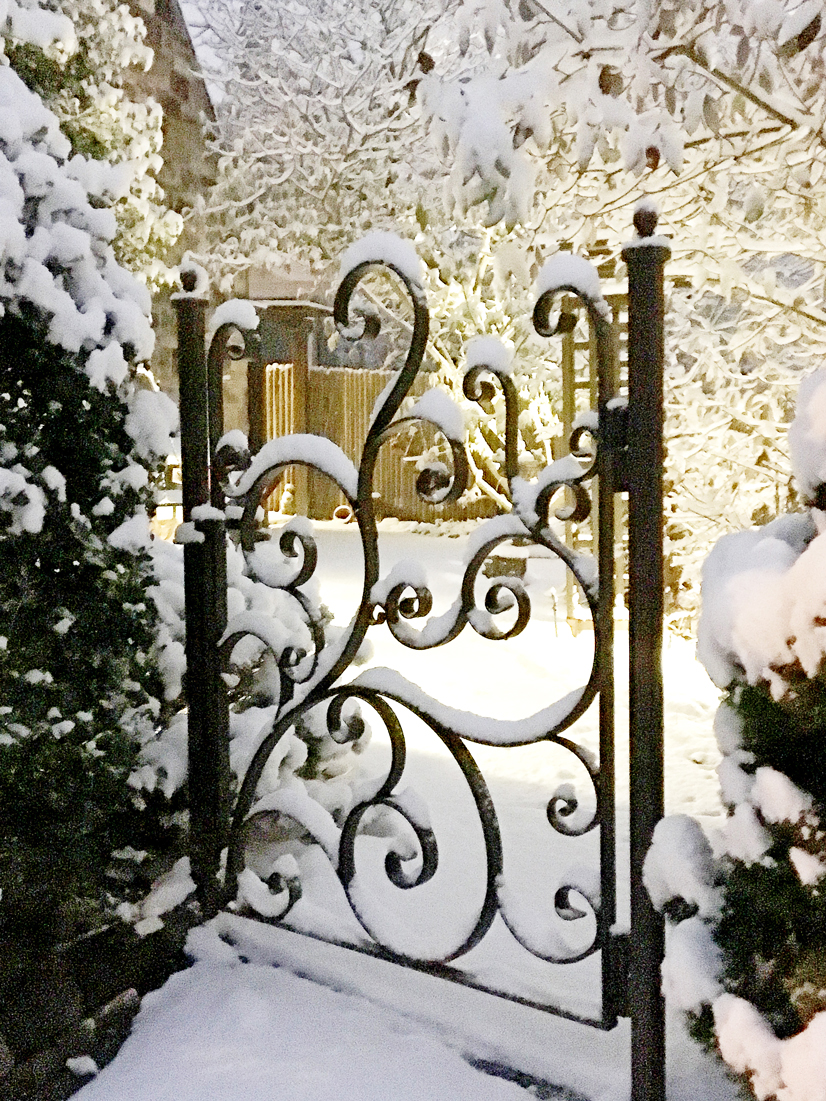 When people ask Michele Jarrett where she lives, she simply replies, “On Arden Road, in the house with the gate.” The fluid, organic design of  Walter’s  iron creation makes a distinct entry into a space that feels like a secret garden. Flourishing flowers and well-tended greenery provide a perfect setting for another John Walter signature piece, a free-standing astro, or armillary sphere. Walter graduated from the Merchant Marine Academy and during his career in shipping he developed his engineering skills working with iron and steel. The celestial spheres or astros hearken back to ancient times and were used by mariners and astronomers to calculate celestial positions. Walter calls his unique, free-standing globes “whimsical gizmos.” In this yard the intricate astro stands as a sentinel in a garden bed of purple cornflowers. The gate and sculpture predate Harris and Jarrett at the Arden Road house. Delighted with the gate and “gizmo,” Walter recently created a crisp, simple railing to their front door. There are plans for one more gate in the garden. Michele welcomes the passersby who slow down to gaze at the garden and Walter’s stunning entryway. 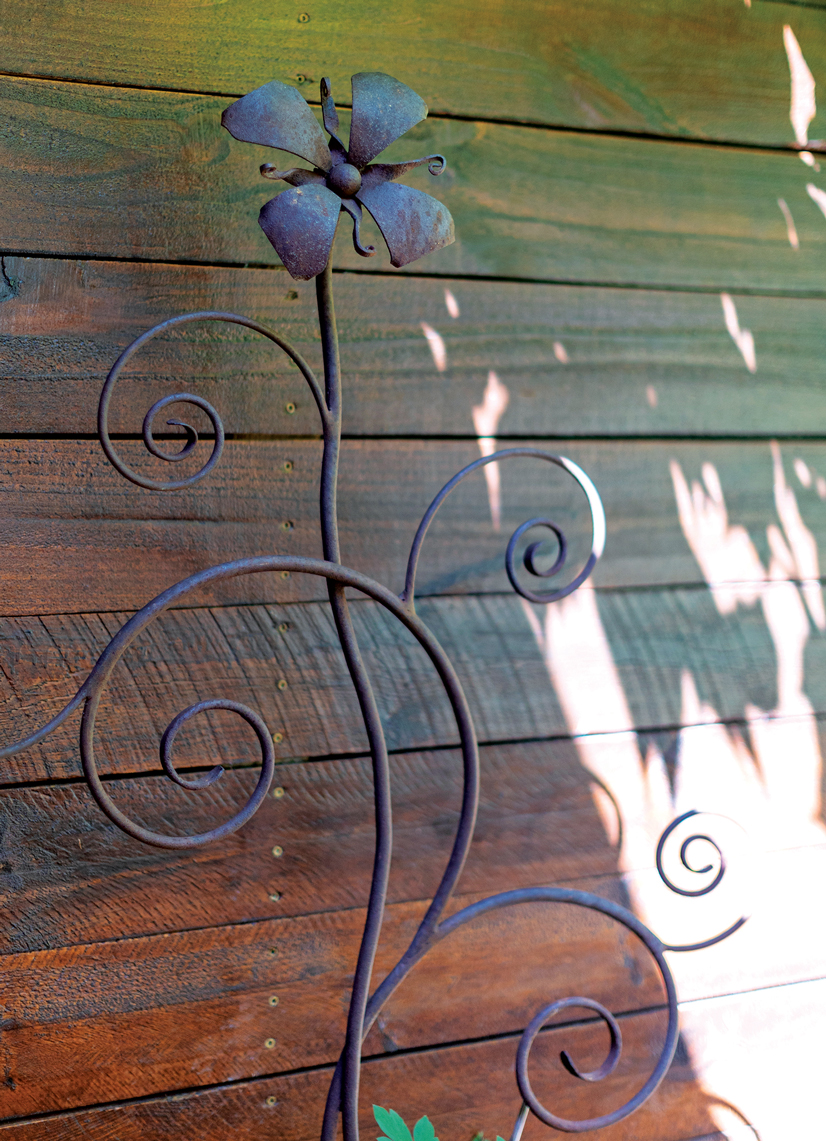 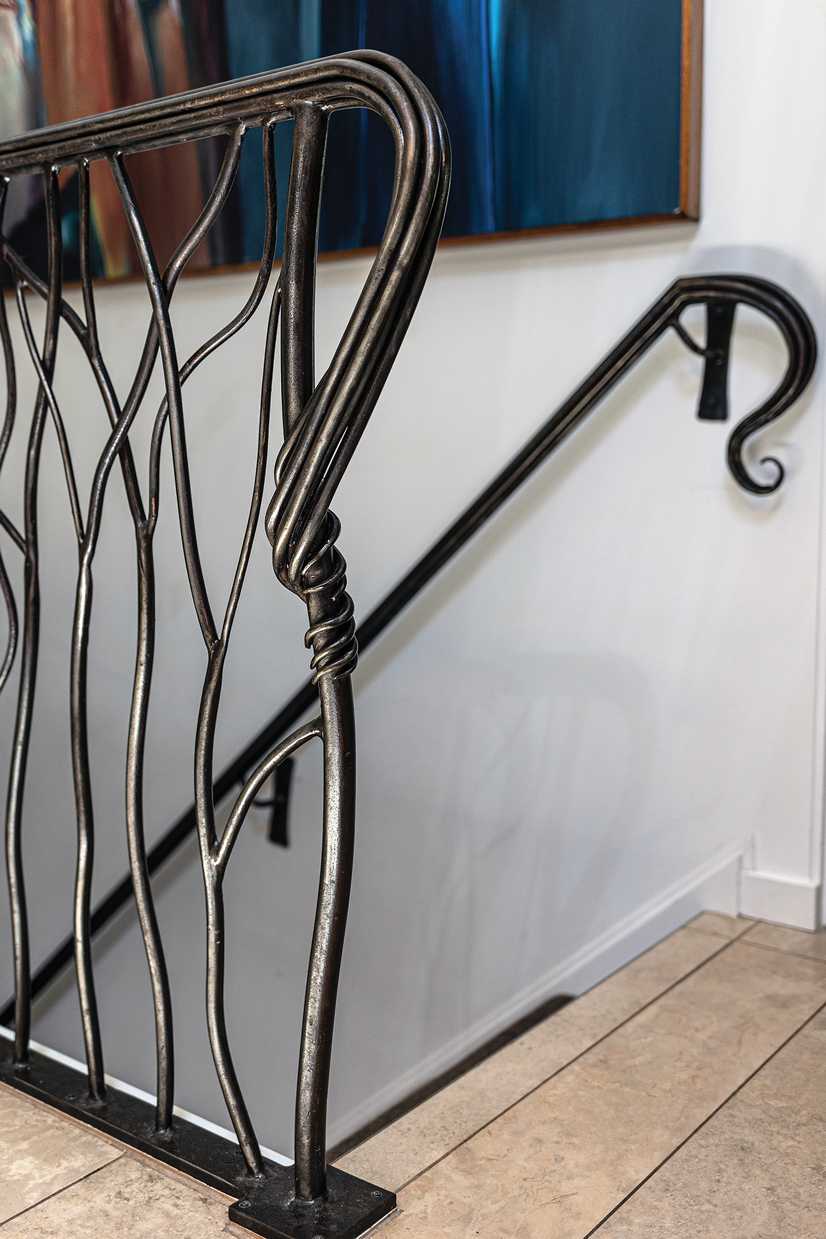 A 30-year friendship and professional relationship with Jody and John Walter finds expression in the unique artistry that enriches the White Oak Circle home of Helene and Regis McQuaide. According to Regis, the founder of Master Remodelers, “John observes the architectural details of a home and his designs complement and enhance it.” They have worked together on numerous design-build projects throughout the city. The McQuaide home features examples of both John’s industrial and organic sensibilities and his attention to detail. Organic iron tendrils intertwine to create a distinctive railing between the kitchen and downstairs living area. Tall iron candle wall sconces suggest tree branches while a sturdy candle holder showcases an inventive use of circles. The McQuaides’ expansive outdoor area displays John’s works. Some are geometric and industrial with assertive, well-defined lines while others are whimsical and humorous.  For the McQuaides John designed a sturdy, utilitarian potting bench and a table that complements the lines of their sofas. A spindly fantasy bird stands barely discernible on a rock keeping watch over a small waterfall and pond. To enjoy hot dogs and marshmallows around the firepit, John fashioned individualized  twig-like iron sticks. The McQuaides’ well-designed spaces are perfect settings for Walter’s expressive pieces.

Virginia and Bryan Martindale moved to Midway Drive from Atlanta in 2014 and admired John Walter’s handiworks at the home of their neighbors. Raised in the  Deep South, they appreciate the folk tradition associated with the bottle tree. Originating with African slaves, the custom involves slipping empty, colorful bottles onto the branches of leafless trees. During the night evil spirits are lured into the bottles and destroyed by the morning sunlight. The Martindales visited Iron Eden and described the bottle tree to John who quickly sketched his version. The tree is a charming addition to their backyard. Bryan remarked, “We are always on the search for unique bottles for our special tree.” When visiting Iron Eden it’s hard to resist bringing home an unexpected treat. The bottle tree’s companion is a signature John Walter large abstract daisy that enlivens their lush green garden.

Jody Walter describes what energizes their business. “Iron Eden is keeping the age-old art of blacksmithing alive but with a functional, modern twist.” Throughout the city and in Mt. Lebanon, John Walter’s artistry flourishes. Look around to find his railings, staircases, trellises, gates and furniture.  In his unique creations he honors our industrial traditions. Joe Magarac would be proud.