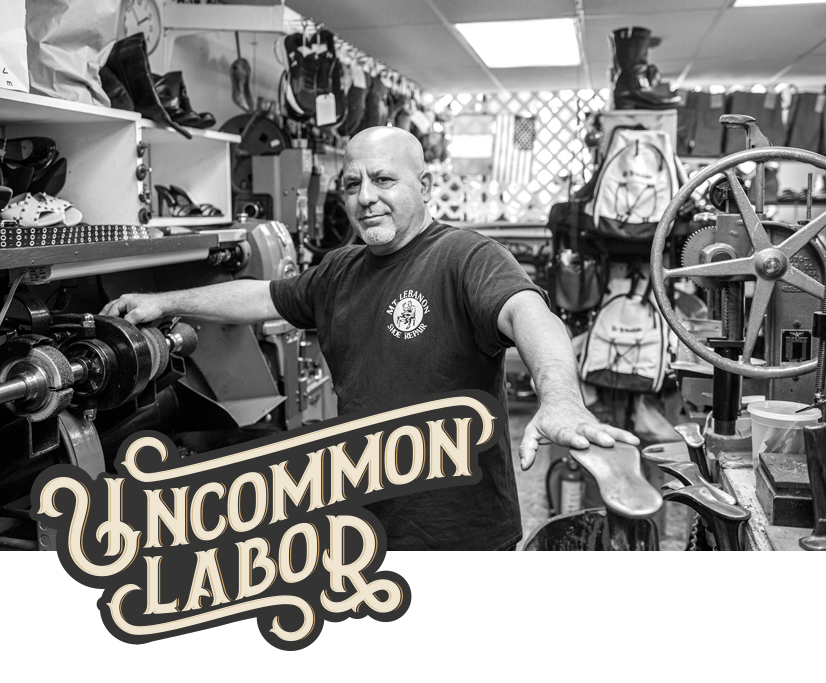 A milkman, a cobbler, a calligrapher, a compounding pharmacist, a seamstress: You might expect to find that these occupations have grown obsolete. These days, many people get their dairy—and even their medicines—from the grocery store, create their own invitations online, and buy new clothing and shoes when they become old or out of style. But that’s not always the case. In fact, many of these “old-timey” occupations are thriving, and you can patronize them right here in the heart of Mt. Lebanon.

Cobbler (noun): A maker of shoes and other leather goods

Ross LoCastro’s Mt. Lebanon Shoe Repair defines what it means to be a family business. At age 13, LoCastro learned how to restore leather goods from his uncle, who ran his own shop in Squirrel Hill.

LoCastro continued the practice throughout high school and into adulthood. In 1996, he decided to open his own shop after getting married and moving to Mt. Lebanon.

“I opened my own business here on Washington Road because there was a need for it,” LoCastro said. “There wasn’t anybody in the neighborhood who had this type of business.”

And today, he’s still the only one in the neighborhood.

As a cobbler, LoCastro repairs much more than just shoes. He works on any leather goods such as purses, luggage and even baseball gloves. Repairing men’s shoes used to be most common, but now LoCastro says it’s women, with shoes, purses and leather jackets, who are his best customers.

“It also went from the businessman to the essential worker—work boots and things of that nature,” LoCastro said. “But it evolves constantly. You have to be ready for it at all times.”

Not only has LoCastro’s customer demographic changed, but so has the overall quality of leather goods. Fast fashion has turned the world into a “throw-away society” in which people are more inclined to spend less on something that may not be made with good material. They aren’t as likely to need shoe repair, as it is cheaper to buy something new. LoCastro encourages people to invest in something that is more expensive, because it will have a longer lifespan.

“It might cost a little more, but in the long run you’re saving so much money,” LoCastro said.

For LoCastro, this recommendation does more than just keep his business alive. Repairing shoes protects the environment by minimizing what goes into landfills.

Despite the growing trend of fast fashion, LoCastro sees about 50-100 customers a day during the busy season.

“I’ve had a nice customer base for 25 years that’s gotten larger and larger as the years go on,” LoCastro said.

Just like his uncle, LoCastro has taught his son, Ross LoCastro Jr., the art of restoring leather since he was a young boy. He would love for him to take over the business, but there’s no pressure.

“He’s gotten really good at it,” LoCastro said. “But he’s very smart, so I wanted him to go to college to get his degree and get out there in the world. If he doesn’t like it out there, he can always come back and take over the shop.”