Norm Waldman, Bower Hill Road, jumped from an airplane into a black abyss in the predawn hours of D-Day, June 6, 1944. He and his fellow 82nd Airborne Division comrades landed behind enemy lines 20 miles away from his target, a bridge his machine gun squad was supposed to keep open for the invasion troops soon to be landing on the beaches of Normandy. Waldman and his squad fought for four days as the surrounding enemy tightened the noose. Late on June 9, a German soldier threw a “potato-masher” hand grenade into his position, killing one of Waldman’s squad members, blinding another, and wounding Waldman. Looking up the barrel of an enemy rifle, Norm held up his hands in a sign of surrender. His odyssey was just beginning. 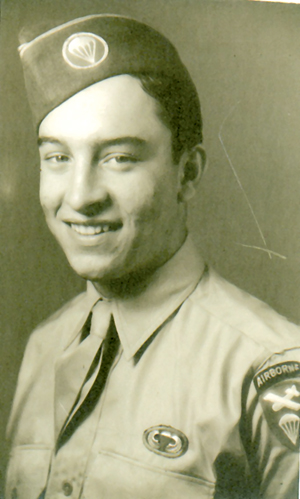 Jammed into a boxcar, he rode toward Stalag XIIIA, a large POW camp in Germany. American fighter planes swept down and strafed the train, killing and wounding several of the men in Norm’s car. “Everything was chaos,” says Norm. Unloading at the camp, he saw masses of starving Russian prisoners. They were treated like animals. Americans, at least, got bread and, on Sunday, watery soup. Hungry, Waldman and a fellow prisoner escaped one night through the bowels of the camp’s latrine. They were caught in a farmer’s field the next day, stuffing themselves with raw sugar beets. Through the Swiss Red Cross, Waldman got his hands on a book, German for British Prisoners. He studied it thoroughly and used his new knowledge of German to win small perks, including a barrel of beer for Christmas. He volunteered to serve as an interpreter on a project building housing for bombed out German families. The location would soon become the site of one of the most infamous events of the war: Dresden.

On the night of February 13, 1945, U.S. and British bombers began a three-day attack on Dresden that would engulf the city in flames. Waldman was just outside Dresden when he saw the first planes arrive and the incendiaries drop. “We saw the city start to burn,” he recalls. He and his fellow prisoners huddled in a shelter as the concussions of 500-pound high explosive bombs threw them into the walls and ceiling. “You can’t imagine the force of these bombs, even as far away from them as we were. Of all I went through during the war, those bombs were probably the worst.”

Like novelist Kurt Vonnegut, also a POW in Dresden, Waldman emerged from the shelter to a flattened and blackened city, where hardly anything stirred. His job became retrieving the dead. Then, things got bad. Food was so scarce, the prisoners were given an hour a day to scour the countryside for grass and weeds. They would boil what they collected with blue stock salt and eat it. “Then we would keep the windows of our barracks open and entice sparrows to fly in. We would catch them with our hands, rip the head, feet and feathers off, and then pop them in your mouth. You had to do it quickly because other guys were fighting you for it. You can’t imagine what hunger does to you.”

As the Allies closed in on Dresden, guards started the prisoners on a march into Czechoslovakia. There, their column ran into Soviet allies, a tank battalion of Marshal Konyev’s First Ukrainian Army. The Ukrainians congratulated Norm on his liberation, then handed him a Russian-style fur hat with a red star and a machine gun. “I fought the rest of the war with the Ukrainians. We captured a lot of Germans. It wasn’t easy. But at least I was getting fed.”

In Prague, Waldman got word that American lines were just across the river. One night in late April, he wrapped rags around a horse’s hooves and silently slipped away from the Ukrainians. Norm spent a month in an American field hospital for malnourishment before being sent home on a hospital ship. He finished the war at Fort Benning, where he served as an instructor. World War II ended 67 years ago, but the memories for Waldman are fresh. “Some things, you can never forget,” he says.

Todd Depastino is a teacher, author and coordinator of the nonprofit Veterans Breakfast Club, which encourages veterans to share their stories. He will be profiling a veteran occasionally for mtl. The Veterans Breakfast Club is collaborating with Veteran Voices of Pittsburgh to archive veterans’ stories. Read or listen to the stories at veteranvoicesofpittsburgh.com. Learn more about the club at  veteransbreakfastclub.com