The Mt. Lebanon Cemetery, stretching the hills between Washington Road and Scott Road, is such a staple of our community that it’s easy to forget that it even exists. But this 95 acres of green is full of stories, many of which we’ll never know, but some of which we both remember and celebrate. The Historical Society of Mount Lebanon has collected a handful of those stories over the years and put together a self-guided tour through our third-oldest cemetery in the South Hills. (The older ones are Old St. Luke’s and St. Clair cemeteries.) You can walk at your own pace, take a spontaneous detour, and hunt for the famous and unusual graves hidden among the hills. 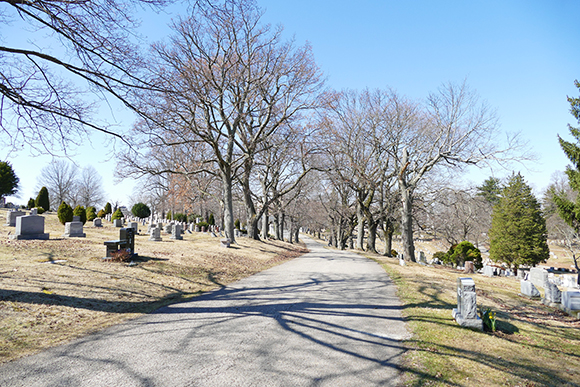 While the land for the cemetery was set aside in 1874, the project didn’t officially materialize until 1899–20 years before the Liberty Bridge and Tunnel even existed–and records weren’t kept until three years later. Now roughly 22,000 graves later, the cemetery is 95 percent occupied. The oldest graves can be found in the front hillside, nearest to Washington Road, and some graves are even older than the cemetery; they were relocated after it opened. Many of the plots are also unmarked, because of now-deteriorated wooden gravestones or those buried without one at all.

Some of the graves list a 1918 passing. The flu epidemic hit many communities across the United States hard, and the South Hills of Pittsburgh did not come through unscathed.

Hear it from the experts themselves: the Historical Society of Mount Lebanon will give a lecture and slideshow presentation about the cemetery on Sunday, May 3 at 1 p.m. The Graves & Goblins Lecture will be held at the Mt. Lebanon History Center on 794 Washington Road and costs $10 for non-members and $5 for members.

The oldest section includes familiar Mt. Lebanon names like Bockstoce and Beadling. Casper Carlisle, a Civil War Congressional Medal of Honor recipient, has a bright and shiny new tombstone, despite his 1908 death. Yellow flowers have recently opened up in the sunlight and live in small bunches beside the engraved granite. Cemeteries have always had a stark balance of life and death, the kind that can’t go unnoticed with each tuft of tall grass, twisted tree and bright, yellow flower living boastfully among the already departed. 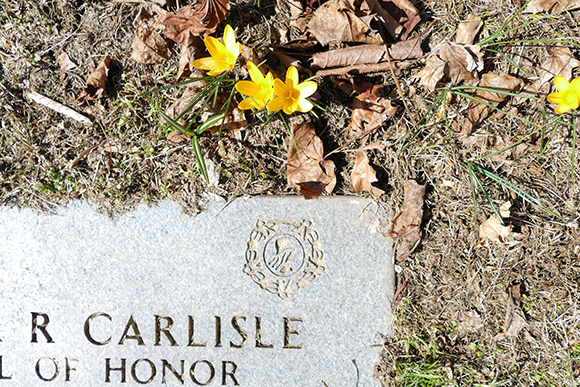 Farther down the path, a group of graves with dates a bit too close in proximity stand together. This is Babyland. For some years, the cemetery buried children free of charge and allocated this small plot of land to that purpose. Some children grew to be teens before passing away, while others stayed in the world a mere three days. Many of these presumably unhappy stories have been lost to the years. 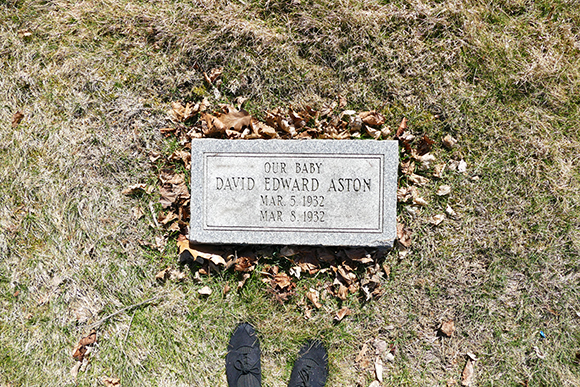 The path winds on, and the granite tombstones begin to divagate from the norm. Some include ornate carvings, others are accompanied by a granite pot, meant for flowers. Some slabs of rock are black and others are not a slab at all, but a bench. One tombstone features a field scene framed by a row of trees and a large reindeer in the foreground, all carved into the granite, with the name “Henderson” across the top in large, bold letters. Yet another, newer gravestone is decorated with a simple cross.

Portraits of the deceased, two brothers, complete with baseball hats, earrings and nicknames are carved into a set of gravestones on the main drag. The variety is tangible but the sentiment is the same: we miss our family members. They are worth remembering. 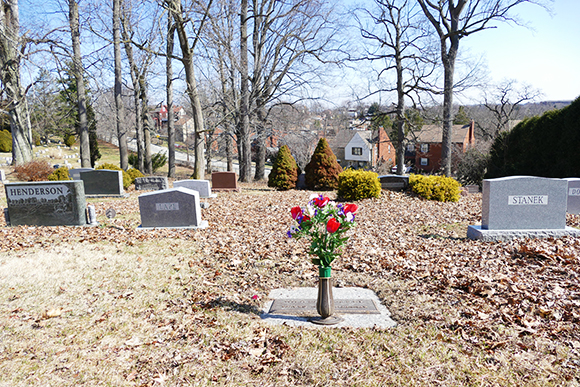 Some plots are more remembered than others, such as the grave of police officer Vic Cianca, whose life and gloved dance moves as he directed traffic were immortalized in the movie Flashdance. He’s laid to rest in the main mausoleum on the third level. Inside, there are also shelves, divided into compartments of different sizes with a glass cover, where the living can place decorative urns and mementos from their deceased. This type of “grave” is becoming more common, as cemeteries reach maximum capacity and families look for more cost-effective ways to remember their dead.

The self-guided tour can be done any time after you receive the handout at the presentation. For details: www.lebohistory.org. 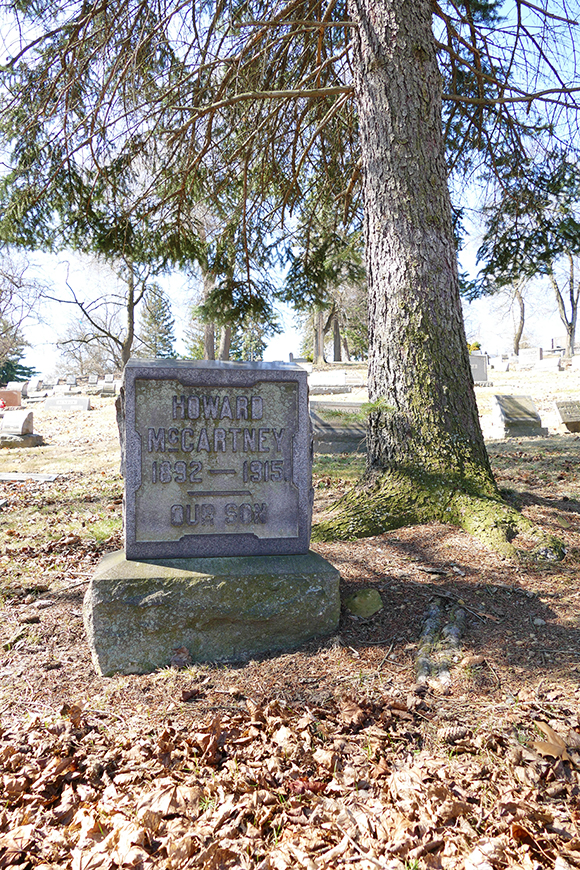 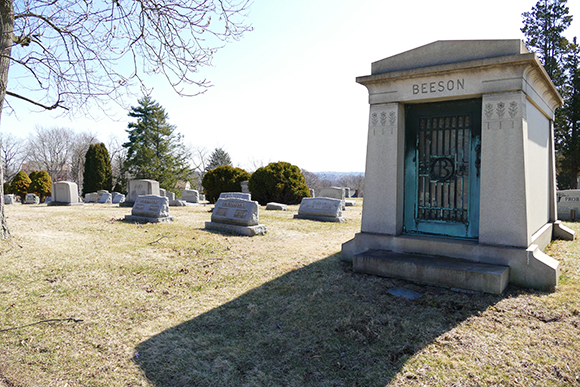 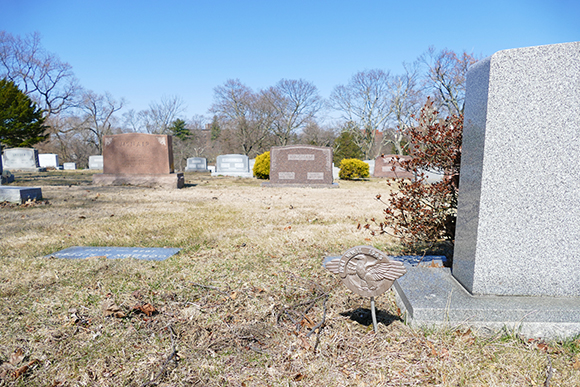 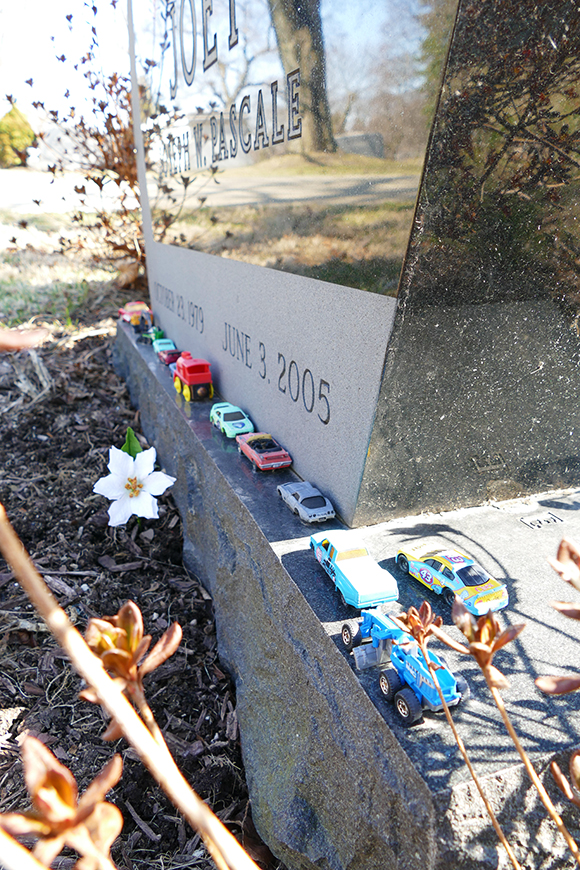 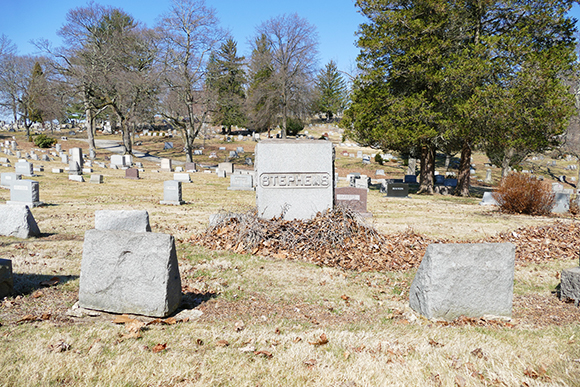