To his fans, he has one name—Wayno.

“It was a nickname my grandfather gave me as a kid, probably to make my name sound more Italian,” Wayno says. Now the childhood name is his trademark.

Wayno, nee Wayne Honath, who lives on Atlanta Drive with his wife, Kim, is an accomplished cartoonist, illustrator, pop artist and writer. He’s published work in The New Yorker, Nickelodeon Magazine, The Guardian and National Geographic, just to name a few. In November, Wayno joined GoComics, an online site that features editorial cartoons and comics like Peanuts, Calvin and Hobbes, Garfield and Dilbert for free and by subscription. 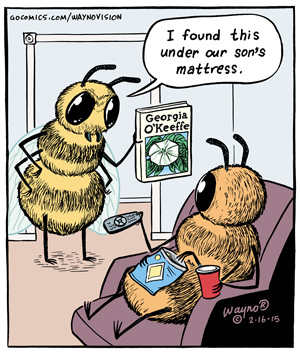 Julie Halper, a Universal Uclick/GoComics representative, said in a news release that Wayno’s series for the company, called WaynoVision, makes for a surreal experience for readers. “Reading WaynoVision is like wearing 3-D glasses, welder’s goggles and X-ray specs, while peeking through a damaged kaleidoscope,” Halper said. “The world looks vaguely familiar, but unexpectedly distorted at the same time.”

To keep track of these ideas, Wayno doesn’t go anywhere without his black sketchbook and some blue pens. He never knows when an image might pop in his head and inspire his next comic.

When he’s not doodling, Wayno might be singing or playing the harmonica in his band, The Chalk Outlines. He used to write album reviews and illustrate for Cool and Strange Music Magazine, a former quarterly magazine that featured—you  guessed it—cool and strange music. In Mt. Lebanon, he’s designed logos for A’Pizza Badamo and Bado’s Pizza Grill and Ale House. 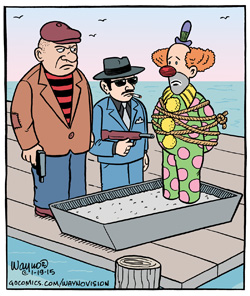 Although his weekly comic series make his readers laugh, an incident overseas has had a sobering effect on Wayno. On January 7, two gunmen stormed the Charlie Hebdo building, a satirical weekly newspaper in Paris. The armed men shot and killed 11 people. Wayno says the event shocked and saddened him, but he also says it’s made him and others in the cartoonist community discuss issues surrounding the attack.

“I think the bottom line for me is that ideas and speech should only be countered with ideas and speech. Nobody should be killed for their beliefs, but all ideas and beliefs should be open for challenge, even in the form of mocking and ridicule.”

But the attack on fellow cartoonists won’t derail his work. As long as he can pick up a pencil, he’ll keep drawing. “I hope that my cartoons make people laugh, and sometimes make them think,” he says. “Professionally, if anything I’ve done ends up hanging on someone’s refrigerator door, or cubicle wall, then I’ve done my job as a cartoonist.”