A large part of this week’s Mt. Lebanon Citizens Police Academy focused on use of force. We started Tuesday’s discussion on the topic by learning the law.

I felt like I was in class, like at school. Officers pulled out what looked like a textbook and read us Pennsylvania Code Title 18, section 508. This section details when it is permissible for officers to use force.

As one officer told us: “It’s a very complex topic” and the law is “very vague.”

Here’s a look at the law: (As one of my classmates pointed out, use of gender needs to be updated in the state code!) 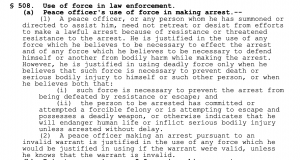 We then learned about case law that guides response. 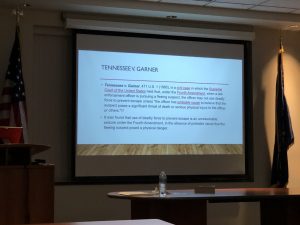 Officers then shared factors that should be taken into consideration to determine the reasonableness of force used. They included: The immediacy and severity of the threat to officers or others. The conduct of the individual being confronted, as reasonably perceived by the officer at the time, and an individual’s mental state and ability to understand and comply with officer commands.

Per the law, an officer’s response should be based on what is reasonable to know on the scene with the information the officer has been given. It all starts with that 911 call and what officers are told is happening. Court cases are not determined based on 20/20 hindsight views.

“We have to react to their level of resistance,” Officer Steve Shipe said. “If someone tries to walk away, we can’t punch them … We are reactive to that person’s behavior.”

Officers follow the National Tactical Officers Association guidelines for priorities of life that help influence decision-making in a critical incident where lives are in the balance.

Yes, this means protecting themselves is not the top priority. Protecting hostages and innocent civilians comes first, even before themselves.

Mt. Lebanon is the only police department in the South Hills Area Council of Governments to teach defensive tactics on an annual basis. This means our officers are regularly trained to know how to respond.

Deputy Police Chief Jason Haberman provided statistics on use of force in Mt. Lebanon. On average, Mt. Lebanon has 21 incidents of use of force (which, here, means anything above compliant handcuffing) per year.

“Relative to what other departments do, that number’s extremely low,” he said. In the last 20 years, there has never been a ruling that this use of force has been found to be excessive.

Another important thing I learned is that tasers are only about 60 percent effective. Did you know that? I certainly didn’t. I always wondered why they weren’t used more.

We learned that when a taser fires, two small darts need to make a connection with the person in order for it to work. Sometimes a person’s clothing stops the penetration or their stance doesn’t allow for the taser to connect.

Some other things that I learned:

>>If you’ve ever seen a situation where there are multiple officers involved in arresting one person, that’s because the less effort an officer needs to exert, the more control he or she has on what they’re doing. Which really means, there’s less chance of a person getting hurt because each officer has increased control.

>>Of course, all of our minds go to the high-profile cases where police used excessive force. In many of those cases, courts often look at the level of supervision an officer has, their training and seniority.

“Most of the high-profile incidents would be policy violations in our department,” one officer said. That means officers are trained to know the best way to respond and how not to respond.

The goal is to de-escalate a situation before there is the need to use force, although some people simply don’t want to cooperate.

“Everybody’s goal is de-escalation,” Shipe said. “Nobody wants to hurt anyone or get hurt themselves.”

The officers provided us with multiple scenarios to allow us to determine what level of force we would use. In one of the scenarios, it surprised me that some of my classmates thought force was warranted quicker than the officers believed it was.

Try this one for yourself! What would you do?

Imagine this: It’s 11 p.m. and you’re a member of the Mt. Lebanon Police Department.

A call comes in that a man in a restaurant parking lot is suicidal. No weapon has been reported. A family member on the scene made the call for help.

How do you respond? What is the goal? What techniques can you use to solve the situation?

This is a scenario we were presented with during Week 7 of the department’s Citizens Police Academy.

One of my classmates chimed in that we could assume he has a weapon on him. But Officer Shipe reminded us that our response is based on the information given on the 911 call. That’s all we know and we have to respond accordingly, using our training but not making assumptions.

In this scenario, officers said, the goal is to de-escalate the situation by talking to the man in the parking lot. This is something officers are trained to do.

The first officer on scene observes a knife that the man is moving across his wrist.

What should officers do? If this were you and you were an officer, what would you do?

Their goal is to save him, so one officer makes the decision to taser the man to keep him from hurting himself.

What would you have done?

Next, the man gets out of his car and begins to run towards the nearby woods—in the direction of a nursing home—with what officers perceive to be a knife.

Now what do you do? If you’re an officer on the scene, how would you respond? What level of force would you use?

There was a police K9 on the scene, but since the man was wielding a knife, officers made the decision to not send the K9 to stop him, as the dog could be stabbed.

An officer on scene follows the man. They’ve already alerted the nursing home to lock their doors.

Shipe reminds us that keeping your distance is important. So, when he rounded the corner, he made sure to go wide and found the man on the side of the building holding the knife as if he’s ready to stab someone.

Now what would you do?

Shipe pleaded with him to put down the knife.

Another officer attempts to taser him again. It fails.

What would you do? What level of force should you use?

While some of my classmates thought it would be OK to use a gun in this instance, because there’s a man wielding a knife at police, Shipe reminded us that this would be the wrong call. This level of force was not warranted.

The man then begins to run and officers try the taser again. This time, it works.

The man tells police he had tossed the knife. So, they look and find that it wasn’t a knife after all. It was a letter opener.

Given this scenario and how this situation unfolded, what level of force would you have used?