Members of the municipal staff, including finance, public information, planning and recreation, assembled in the Emergency Operations Center in the Public Safety Building as Buttlar announced the emergency scenario. 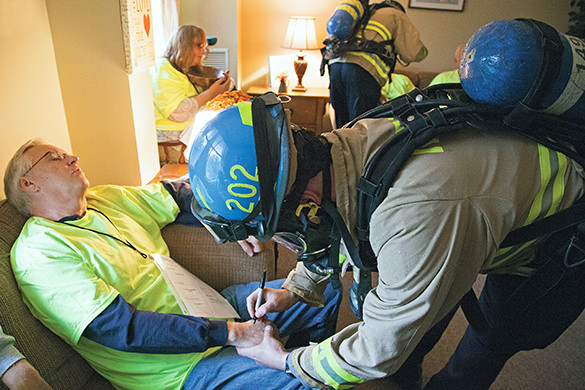 The scenario: residents at the Baptrist Homes started having flu-like symptoms, with some becoming very ill. It seemed like carbon monoxide poisoning might be the cause. And to top it off, a maintenance worker had disappeared, and crews needed to find him.

Public safety personnel, including volunteers from nearby communities, went to work triaging the “patients,” who were portrayed by Baptist Manor residents and crossing guards who graciously donated their Saturday morning.

Five patients “died” during the scenario, but emergency workers had to keep going, eventually doing a practice evacuation, taking the pretend patients to St. Clair Hospital and the evacuees to Providence Point. They also located the “lost” maintenance worker on the roof and had to rescue him.

The public information office worked on how it would spread the word in the event of an actual emergency, using LeboALERTS and Twitter, and planning worked on getting handicapped accessible buses for the transport.

There was only one pseudo-emergency—the food scheduled for lunch wouldn’t be enough for the dozens of people who had been working all morning. With approval pf Finance Director Andrew McCreery, the planners ordered pizza from Mineo’s and the team stayed on for a “hot wash”—that’s emergency speak for evaluating what worked and what needs tweaking. Buttlar was pleased, and the staff left feeling ready for the real thing.