Just last year, Pittsburgh was ranked third in WalletHub’s “Best Cities for Hockey Fans,” behind only Detroit and Boston. Obviously, the Pittsburgh Penguins and their five Stanley Cup wins are a leading reason why we secured a spot near the top of the list, but you only have to take a five-minute stroll through Senator John Heinz History Center’s “A Great Day for Hockey” exhibit to realize that Pittsburgh’s contributions to hockey go much deeper.

“We are beginning a makeover of the Western Pennsylvania Sports Museum, and we decided to start with hockey,” says Andrew Masich, President and CEO of the history center. “We have more than doubled the size of our hockey exhibit.”

“But I think we could knock out a wall or two to expand some more,” jokes David Morehouse, President and CEO of the Pittsburgh Penguins, who is obviously hopeful about future Pittsburgh hockey achievements. 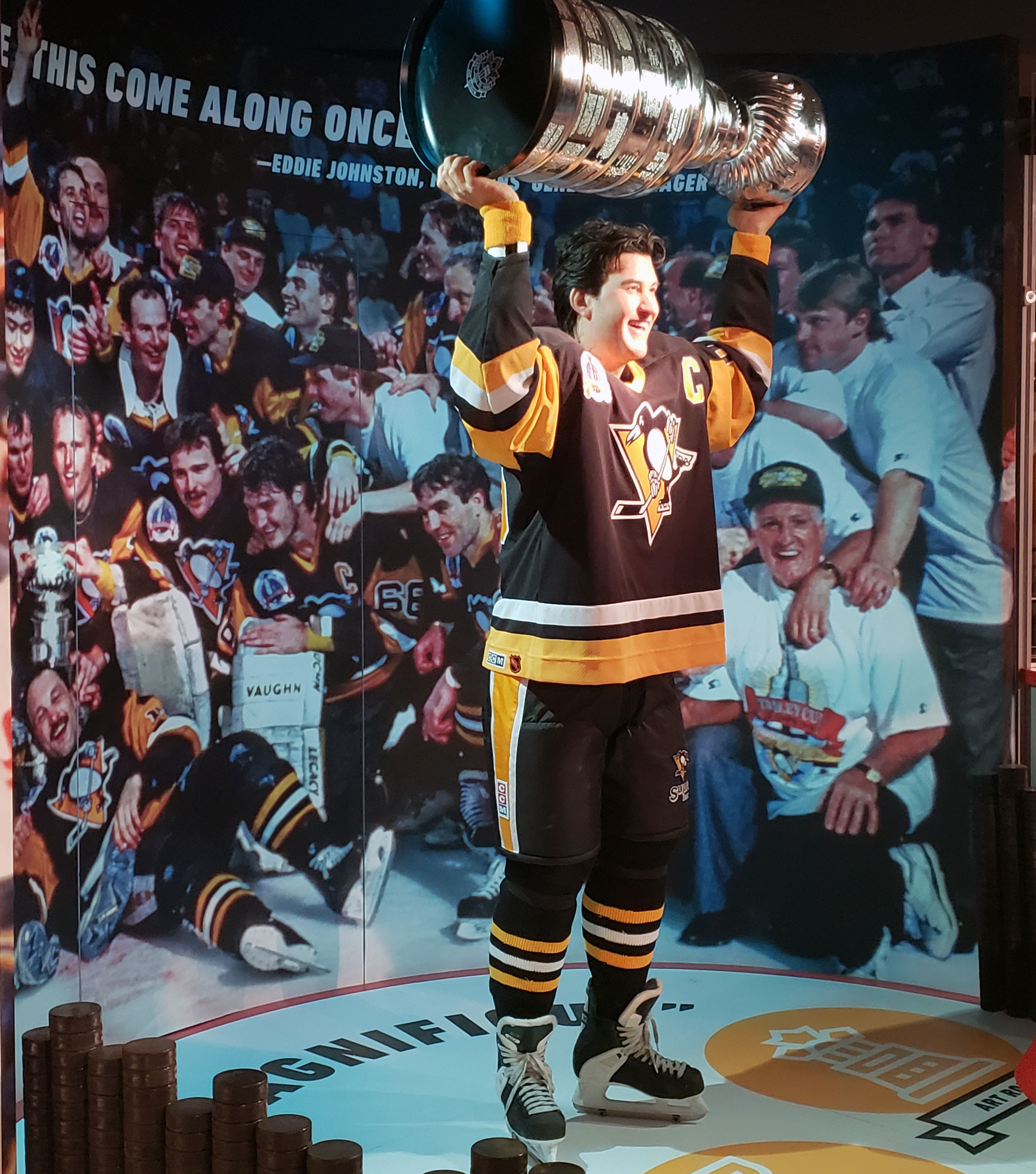 Morehouse’s favorite exhibit piece is the first thing you see upon entering the space—a life-sized statue of Mario Lemieux hoisting the Stanley Cup—”It really looks like him!” says Morehouse. This 23-year-old statue once stood in another section of the museum, but its new location highlights the piece in a clever way— Lemieux’s pedestal is surrounded by stacks of hundreds of hockey pucks. The black pucks represent his career goals and the white pucks are his playoff goals.

The more you look around the exhibit, the more gems you discover from the Penguins’ rich history. Game-worn jerseys, skates, and goalie pads surround the space, with a particularly prominent display case featuring a collection of game-used sticks from the 2009 Stanley Cup champion team. Visitors can also play a bubble hockey match between the Penguins and the Flyers in the Keystone Rivalry Zone or shoot pucks into a dryer just like Sidney Crosby did as a kid.

One of the most interesting displays, however, is a wall of goalie masks including one from every goalie in Pens history. “The old goalie masks are also one of my favorite things in here because it is really interesting to see how they have evolved,” says Morehouse. Though they were not in their final display cases during the press preview, exhibit designer Michael Dubois described his Instagram-worthy plan as, “an enormous goalie mask made of each of the individual masks in the collection.”

A hockey fan himself, one of Dubois’ favorite things about working on this exhibit was the preparatory photo shoot with the Penguins at PPG Paints Arena. “We got a lot of fun shots. Iceburgh even drove a Zamboni for us,” says Dubois. When asked if Iceburgh is qualified for that, he laughed, “Iceburgh thinks he’s qualified for anything.” 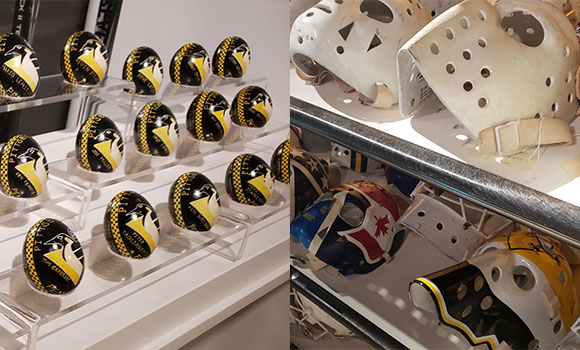 Construction of the new exhibit took about six months, but the history center team has been planning it for more than a year. Anne Madarasz, director of the Western Pennsylvania Sports Museum, particularly enjoyed handling some of the more unique items in the exhibit, such as the players’ turn-style from the old Civic Arena or a set of Penguins-themed pysanky eggs created by a superfan who wanted to share some old school Ukrainian luck with her favorite team.

“These are not typical museum pieces, so we need to be sure that we are showing each object in an interesting way,” says Madarasz. “It’s important that we protect these items, but also make them engaging and fun.” 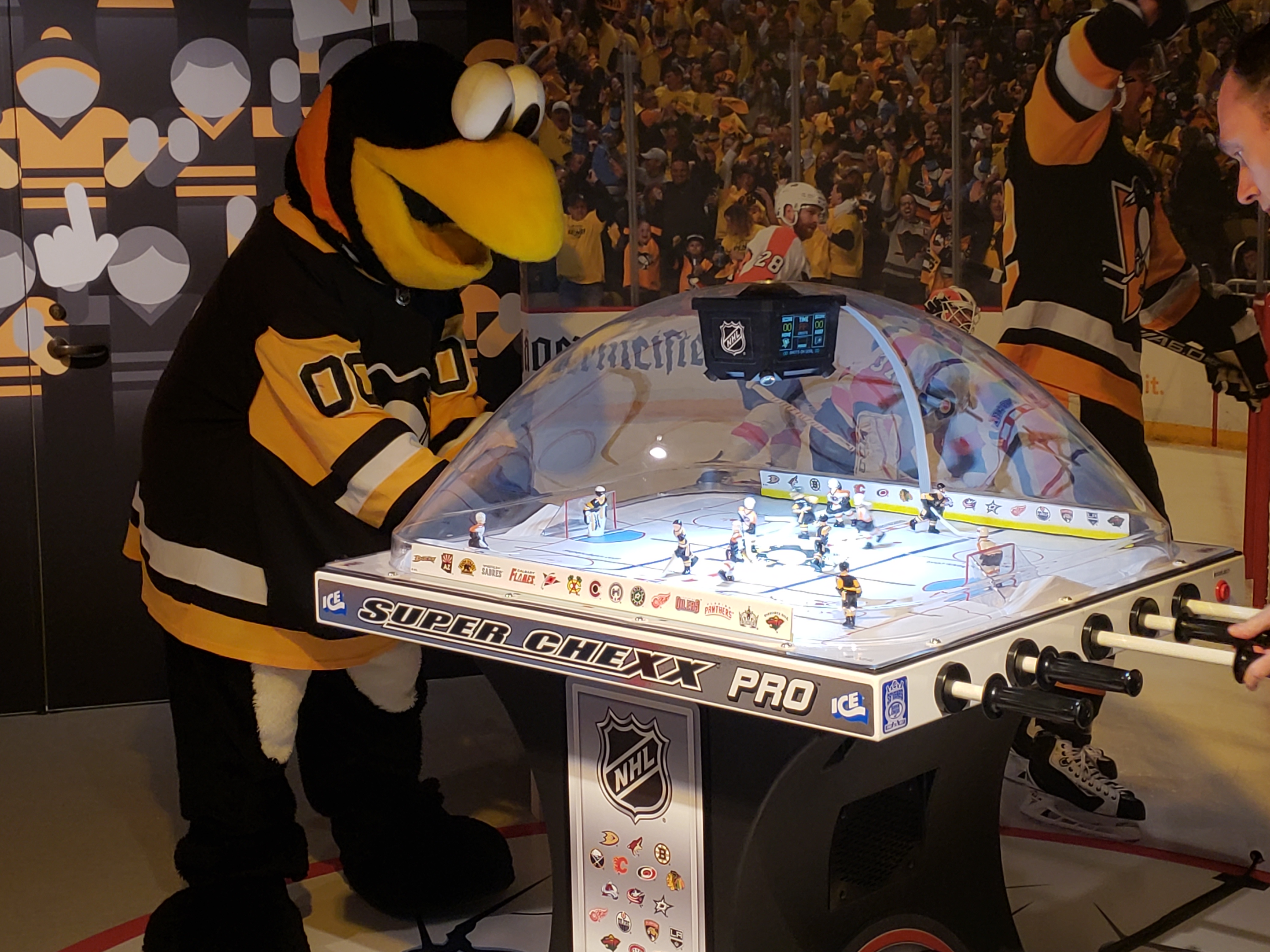 Everywhere you turn, objects are seemingly suspended in thin air, paired with video displays or somehow interacting with visitors. A colorful wall of vintage hockey equipment, attire and jerseys features a jacket from the 1975 Pittsburgh Pennies women’s ice hockey team and a practice jacket worn by Penguins’ coach “Badger” Bob Johnson in 1991.

An often overlooked piece of Pittsburgh hockey history—our Olympic successes—is also represented in the exhibit. Herb Drury’s silver medal from the very first Winter Games at Chamonix, France, in 1924 is on display near gold medalist Dan McCoy’s hockey sled, helmet, gloves and boots from the 2014 Winter Paralympics in Sochi.

Before dropping the puck to officially open the new exhibit, Masich reminisced about Pittsburgh’s three Stanley Cup wins since the museum opened 15 years ago. “The Penguins have now earned five … Hockey goes back to the 1890s here in Pittsburgh and we tell that whole story from the Duquense Garden right up to the Civic Arena right up to today.”