… or so Mozart claims with the English translation of one of his greatest operas, Così fan Tutte, which will be presented by Pittsburgh Opera November 7, 10, 13 and 15 at the Benedum Center for the Performing Arts.

So what are women like, you may ask? Well, if they are anything like Sari Gruber, who is reprising her role of Despina, which she last performed in Pittsburgh while eight months pregnant with her daughter, then women are undoubtedly a force to be reckoned with.

“I like that my Mom sings opera. I feel like Pittsburgh Opera is my home because I go there so much,” says Sari’s fourth-grade daughter, Katharine, who is looking forward to seeing her mother on stage this week.

Though Katharine’s favorite activities are ballet and gymnastics, she is no stranger to the opera world. Katharine traveled to theaters far and wide with her mother before she started first grade here in Mt. Lebanon.

Katharine is excited to see her mother as Despina, but she is also looking forward to seeing Sir Thomas Allen, the famous British baritone who was the real-life inspiration for Billy Elliot, as Don Alfonso. Allen was director for Così fan Tutte as well, and audiences will find few similarities to the production in Pittsburgh Opera’s 2005 – 2006 season. 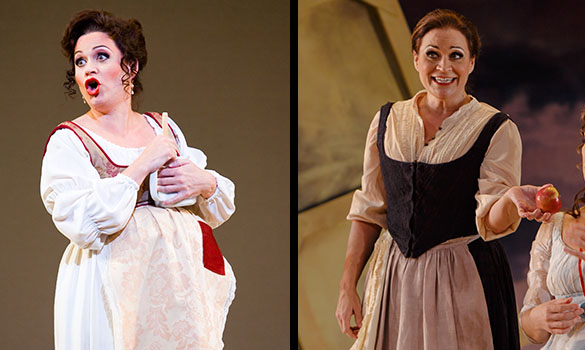 “Everything is totally different,” claims Sari. “Set, costumes, director, conductor, cast. Even when you do a piece over and over again, when the cast changes, it takes on an entirely different feeling. It is something that I cherish, because it is never old.”

Audiences may also notice some changes in Sari’s role. Her pregnancy became part of Despina’s character in the last production. In reality, her pregnancy did not hamper her very much. But they padded her baby bump, encouraged her to waddle through her blocking, and they worked in an amusing bit where Despina kept snitching food to satisfy her cravings.

Sari is drawing on new life experiences this time around, and her voice has matured slightly, “I am a lyric soprano,” says Sari. “I was a lighter lyric soprano, but then my voice deepened a little bit after having a child. Others might not know, but it is enough that I have noticed.”

Interestingly, Sari played the role of Fiordiligi in Così fan Tutte with the Florida Grand Opera in January, and she is finding Despina to be a much easier role in comparison. Yet even considering her very recent encounter with Così, Sari is delighted to return to the production. “I connect to Mozart on a very personal level,” she says.  “I think certain singers gravitate toward certain composers, and his is a musical language that I understand. I think it is perfect music.”

Beyond Così fan Tutte, Sari has a growing concert career and some of her upcoming performances include Handel’s Messiah with the Indianapolis Chamber Orchestra and a concert combining the music of Schubert and The Beatles for the New York Festival of Song (“I get to sing Eleanor Rigby!” she exclaims).

Sari’s travels all over the world have given her a true appreciation for what she has right here at home.  “There is so much happening here in Pittsburgh in general, but we have a real jewel in the performing arts community here in Pittsburgh,” says Sari. “It is unlike any community of its size in the United States, and we should be proud of it. Go see live performance. And go take your kids.”

Pittsburgh Opera presents Così fan Tutte by Wolfgang Mozart, running November 7, 10, 13 and 15 at the Benedum Center for the Performing Arts. Readers of Mt. Lebanon Magazine can receive a 10 percent discount on tickets by reserving online here, by phone at 412-456-6666 or in person at the box office using code MTLMAG. Restrictions may apply.