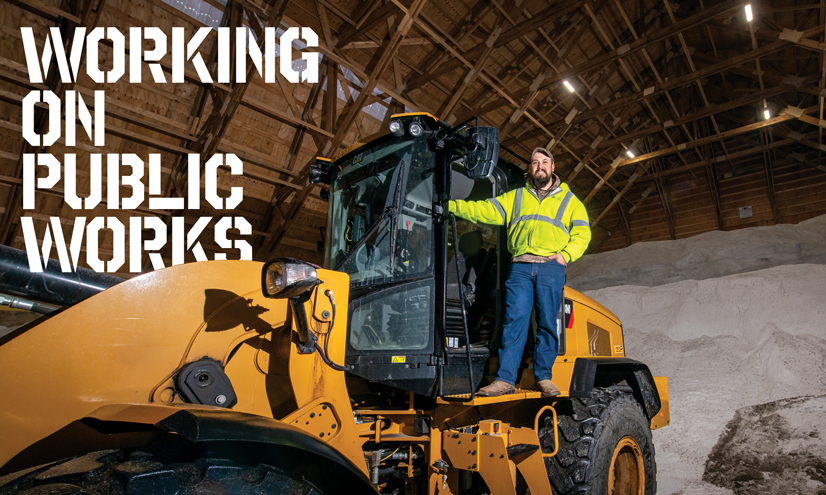 Imagine salt trucks packed so tightly into a garage that drivers had to climb through the cabs of a couple trucks before they got to the one they were assigned to operate. Then, once their trucks were fired up, the next step is to load up with salt. Before they can do that, though, the guy driving the loader has to construct a ramp—out of salt!—in order to access the salt in the back of the dome—a dome that relies on a conveyor that we never had.

Mt. Lebanon’s public works crews don’t have to imagine. That was their every-winter routine up until last year.

Cramped. Tight. Packed in. Jammed up. Those were words that sprung to mind, along with “outdated” and “tired,” with every visit to Mt. Lebanon’s public works facility, at Cedar Boulevard and Lindendale Drive. The facility was built in the 1950s and its last renovation before this one was more than 40 years ago.

In 2013, Mt. Lebanon commissioned an evaluation of the space, and a master plan to meet current and future public works needs. Work on the $8.68 million overhaul began in 2018 and was completed late last year.

The old garage had severe limitations on depth and overhead space, which meant the lifts in the garage couldn’t lift some of the vehicles high enough to work on them. Trucks too big for the lifts had to be pulled over a grease pit in the garage floor for repairs.

The new 15,300-square-foot building has more than 20 feet of overhead clearance, enough to accommodate all of Mt. Lebanon’s vehicles, including the large dump trucks and the fire engines.

The new garage has space for 16 big trucks. The old garage now houses smaller vehicles that previously had to sit outside in the weather. 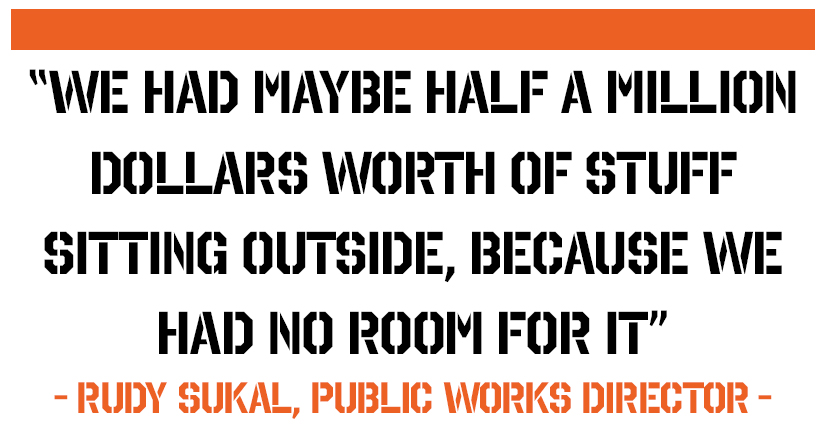 The renovation resulted in lots of new storage space for big stuff that ordinarily would have to stay outside, like snowplows and the attachments for leaf pickup. Moving inside, out of the weather, extends their useful life.

“We had maybe half a million dollars worth of stuff sitting outside, because we had no room for it,” says Public Works Director Rudy Sukal.

It’s too early to tell, but Sukal is expecting to see energy savings resulting from the switch to all LED lighting. “Those lights are strong,” he says. You should see this place at night.”

A new, more powerful generator is able to power the entire complex in case of an outage, something that wasn’t possible with the old generator. The garage has heated floors throughout.

The fuel canopy, which serves as a gas station for all of the municipality’s almost 100 vehicles, is getting a long-overdue  upgrade.

One alternate that was not part of the original bid package was an automated wash area to clean salt and dirt off the snow and leaf trucks.

“We’re hoping to add that in the future,” says Sukal.

Despite the lack of a wash station, a big plus in the new design is a garage bay with doors on either end, to allow for easier entrance and egress.

“So we still need to wash the trucks by hand, but now we can just drive straight through,” Sukal says. “We used to have to do a lot of backing and maneuvering just to get the trucks in and out.”

New health and safety additions include exhaust tubes that remove the fumes from the garage, and an eye wash station, like a double water fountain, replacing the old bottles of eyewash. An elevator brings the building into ADA compliance. All the buildings have sprinklers in case of fire, whereas in the old complex there were none.

The space now has bathrooms, with an “s,” to replace the single rest room that was all the work crews had. New lockers, a better shower and, although there are currently no women who work for the department, a locker room and shower facility await female employees. The renovation made it possible for a not-yet-completed vestibule and reception area for visitors, additional space for offices and meeting rooms, a larger and more modern break room and training room.

The new salt storage building can hold almost a winter’s worth of salt—between 6,500 and 7,000 tons. The old dome’s capacity was 4,000 to 4,500. Any salt that couldn’t fit in the dome sat outside and was diminished every time it rained.

“Now, the salt loader can work inside the building and all the road trucks have to do is back straight in to load up,” Sukal says.

A tank of calcium chloride sits near the new salt building, for really cold days, to dose the truck salt to lower its effective temperature to 0 degrees. The tank replaces an older model that Sukal says seldom worked properly.

“That tank was there when I started,” he says. Sukal started here in 1987.

Adding the space had a ripple effect—equipment that was stored at the golf course can move over to the public works site.

One key improvement that combines safety and efficiency is the addition of a second access point to the complex. The long street of the complex, from the Lindendale Drive entrance, has no speed barriers, and employees said contractors entering the site to make deliveries would sometimes drive the length of the facility at unsafe speeds. Vehicles exiting the maintenance and parking garages risk collision with contractors’ vehicles. During recycling events at the facility, the single entrance and exit would sometimes cause congestion.

“Also, if anything would happen where the main entrance was impassable, we’d be all bottled up,” says Sukal.

A big chunk of the $8.68 million price tag was devoted to re-engineering the space to create a bypass channel for stormwater overflow, something that was mandated by the Federal Emergency Management Administration. The work, done by Gateway Engineers, Mt. Lebanon’s engineering consultant, required excavation to manage excess rain water that would accumulate after a major storm.

“Any time we’d get heavy rains, the water would spill over and flood, but after this, I don’t think it’s ever going to flood again.”

As with life in general, Sukal wasn’t able to get everything on his wish list. The automated wash station would save a lot of work hours. A lot of equipment still sits outside, so he could use one more building.

But the days of crawling though truck cabs and building salt ramps are finally over.