a style for everyone

It’s official. Americans are crazy for yoga. More than 15 million of us now practice, and although yoga is some 4,000 years old, it is one of the fastest-growing health trends in the country.

Yoga has always been hot in and around Mt. Lebanon, where the recreation department’s ever-popular (and affordable) Hatha yoga classes have filled fast for years and many health clubs offer classes.  But recently, a number of specialty yoga studios have popped up in the South Hills. Today, yoga ranges from gentle stretching with breathing to an intense cardio workout…and everything in between. There’s a yoga option for practically everyone, and each place has its own niche. So before you don your LuluLemons, unroll your mat and find your way into Downward-Facing Dog, read on to find the spot—and yoga style—that suits you best. 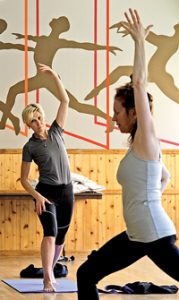 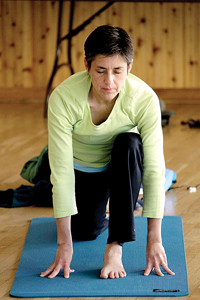 Rec department teachers have loyal followings, and the program offers flexibility. Sign up for a series of sessions at a discounted rate or pay for any class you choose on a walk-in basis. Rec Department Program Assistant Lisa Wuycheck confirms that yoga is among the department’s consistently popular programs, with 15 to 20 people per class.

Carol Day’s, morning yoga runs seven weeks on Mondays or Wednesdays from 10 to 11:15 a.m. Janet Tant teaches afternoon yoga, also a seven-week session, from 1 to 2:30 p.m. on Tuesdays or Fridays. These sessions cost $44/resident, $49/non-resident or $8 for a walk-in.  Evening yoga, a six-week session taught by Maggie-Borza-Petri, is $38/resident, $43/non-resident or $8 for a walk-in.

Room A, where yoga usually is held, is very basic, but there’s a relaxing view of the park and plenty of free parking.  Bring your own mat or plush towel. The next sessions begin this month. See page 57 for details.  Register on line at www.mtlebanon.org; click on the green Recreation button on the homepage.

Walking into the Himalayan Institute makes you want to breathe deeply and relax. The faint smell of incense hangs in the air; pale lavender walls and soft music lend a peaceful feeling. Potted plants spill over the windowsills, and one studio wall is filled with yoga props: mats, blocks, blankets, straps.

The Himalayan Institute is an international nonprofit organization that teaches primarily Hatha yoga, which combines stretching and strengthening poses with emphasis on the breath.  Hatha yoga promotes healing, says Director Kate Kill. It’s a gentle yoga that appeals to everyone. “We have classes for children 9-12; our basic class appeals to women 40-70.”

As students progress in the practice, she says, “They have a quality of lightness and grace. Sometimes there is a quality of being more grounded…more confident.”
With these results, it is obvious that the Himalayan Institute not only promotes exercise, but also empowerment. “We want to help you reach your fullest potential,” says Kill.

Other classes: Meditation, Beginners, Hatha I and II.

Patrons at Sterling Yoga practice on a carpeted floor under twinkling lights. Owner Sterling Painton laughs often and knows her students by name.  During class, she walks around adjusting people’s poses—which is the essence of Iyengar yoga. “It is therapeutic yoga,” says Painton, “very alignment based.”

Iyengar yoga uses a variety of props (which the studio provides) to make sure the body is in alignment while holding poses. “There is not as much focus on the breath,” says Painton. “The goal is getting back to correct skeletal comfort.”

Painton says she was drawn to Iyengar because it had the anatomical answers to injuries. “I’m a fixer,” she says; therefore, she not only works with healthy people, but also with the elderly and people with conditions such as Tourette’s, depression and Parkinson’s. In her seven years of teaching yoga, Painton says she has seen major changes in her students’ balance, health and bodies.

The Yoga Whole offers a great variety of yoga classes—everything from Yoga Basics to Kundalini. Owner Debra Vignovic converted this charming bungalow into an inviting, homey yoga studio. She provides all props for classes.

Vignovic’s philosophy is that “there is a form of yoga for every body,” so she offers a variety of classes that appeal to both beginners and those with a developed practice. “I like the opportunity to take the practice further; therefore, I have the most diverse offering of classes,” she says. Some of The Yoga Whole’s unique classes include heated Ashtanga (a set series of strenuous poses practiced quickly to build strength, flexibility and endurance) as well as Kundalini (poses with quick breath—called Breath of Fire—which unleash energy up the spine invigorating all five chakras, centers of spiritual energy within the body).

Vignovic, who has been practicing yoga daily for eight years, has learned first-hand that a consistent yoga practice reduces stress and provides a calmer way of approaching things. “I’m a totally different person,” she says. 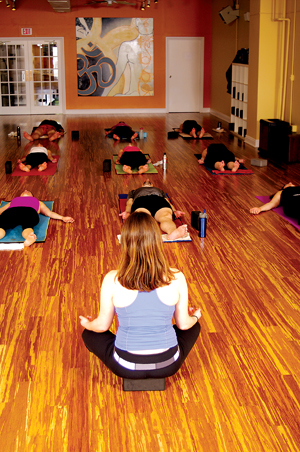 Get ready to sweat at South Hills Power Yoga. For one thing, it’s hot—85 to 95 degrees. For another, it moves fast (think cardio workout.) Vinyasa yoga is a “breath-synchronized flowing practice,” says owner Stacy Vespaziani; students move fluidly from one pose to another. Power Vinyasa keeps a vigorous pace, and the heat allows the body to safely stretch as well as to detox, she says. (For people living farther south, Yoga Innovations in Bethel Park www.yogainnovations.com also teaches Power Vinyasa.)
Power Vinyasa Yoga (also known as Hot Yoga) “tends to attract people who already have a fitness regimen and are looking for something new,” says Vespaziani. “A lot of people come to it for the physical, but stay with it for what they get in the mind-body realm.”

The studio is spacious with high ceilings. Blocks and straps are provided; mats are available to rent (most people bring their own). Be sure to bring water, a towel and arrive on time—outer doors are locked during class to protect people’s belongings, which they leave in the lobby.
Other classes: Pay-what-you-can classes twice a week.

If you need to fit everything—toning, cardio and yoga—into one class, then Glow is the place for you, says owner Paula Archinaco. “Even though we follow yoga principles,” she says, “everything is based on fitness—a full-body workout to get the heart rate up.”

Classes at Glow are designed for fitness gurus who are already in good shape and want to get in better shape. To accomplish this, Archinaco has every prospective teacher instruct her. “I want to make sure it’s hard enough,” she says. For example, the Yoga Tone class encompasses fast-paced yoga moves interspersed with weight lifting, all set to pumping music—a kind of yoga aerobics.

NOT JUST FOR WOMEN

Adrienne Totino (yogawithadrienne.wordpress.com) of Osage Road teaches private and semi-private Vinyasa flow classes in her studio. She says there are definitely more men taking yoga these days. “A lot of people are surprised how they’ve done some aspect of yoga at the gym. It’s really not that esoteric,” she says.

Totino now teaches a men’s class although she didn’t plan it that way, she says: “it just happened.”

One of her students, Phil Pollice,  Valleyview Road, began taking yoga about a year ago. “I had some injuries, and it was a way to work out,” he says. “I did it on a whim.”
Pollice says he initially got into yoga for the physical, but it’s the meditation aspect of yoga that keeps him coming back. “I’m a Type A person, it’s part of the personality of being a surgeon,” says Pollice, “but yoga provides me this wonderful place where I can go and let go—release all the energy and angst that is part of what I do. It revitalizes not just the body but the soul.”

Similarly, 81-year-old Burt Levinson of Rockfield Road credits yoga with maintaining his fit lifestyle. “Balancing, stretching, no matter what kind of condition you’re in, it’s good for you,” he says.

When Levinson began his yoga practice at the age of 76 he had already had two heart bypass operations, and says he felt “a little like an invalid.” Initially, he avoided the senior yoga classes because he thought they would have only women, but he found he liked yoga—and he found that other men took yoga classes as well.

Five years later, Levinson practices yoga seven times a week (along with two Zumba classes) at Sterling Yoga and several other places. Men may think the only important thing is strength, he says, but as you get older, the most important thing is the condition of your living, doing things independently. “Yoga is something almost anybody can do,” he says. “Other people my age have had hip replacements, knee replacements and seem to go to the doctor all the time.  With yoga you push back your old age.”