In our April issue, we wrote with high anticipation about the imminent opening of Yogli Mogli, a self-serve frozen yogurt store, on Washington Road.  Well, for one reason or another, that opening was delayed for a while, but owner Brian Hall, who moved here a few years ago after retiring from the Air Force, persevered though all of the hurdles, until finally he was ready for the grand opening in September. Unfortunately, that never came to pass for Hall, a private pilot who did not survive a plane crash in southern Virginia in late August. The day of the grand opening was postponed one last time, this time because of Hall’s funeral.

When the store did finally open for real on September 22, the same day as Brew Fest, his widow, Ellie, now a co-owner of the store, was on hand. She and Hall’s sister, Laurie Knepper, made the event a celebration of Hall’s life. A table in the front of the store was dedicated to pictures and remembrances of Hall and it was clear Hall was very much a part of the opening day festivities. 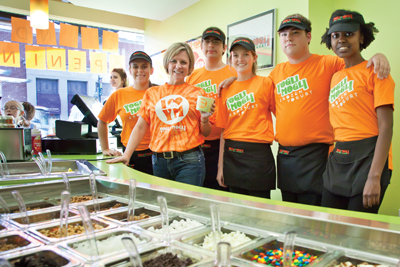