In the summer of 1944, Jacqueline Malissinet was a young French woman living in Paris, anxiously awaiting the day her city would be freed from German occupation. Little did she know when that day arrived, after the Allies entered Paris to deliver it from the Nazis, she would meet the man she would eventually wed.

That man was a Western Pennsylvania native, Victor Vrabel from Clairton, my husband’s uncle on his dad’s side and a captain and ammunition officer in the 12th Infantry Regiment, 4th Infantry Division. He was among the multitude of soldiers who swarmed Paris on Liberation Day. When Jacqueline first encountered him, he was parked in a jeep on a bridge, surrounded by a group of ecstatic Parisians. 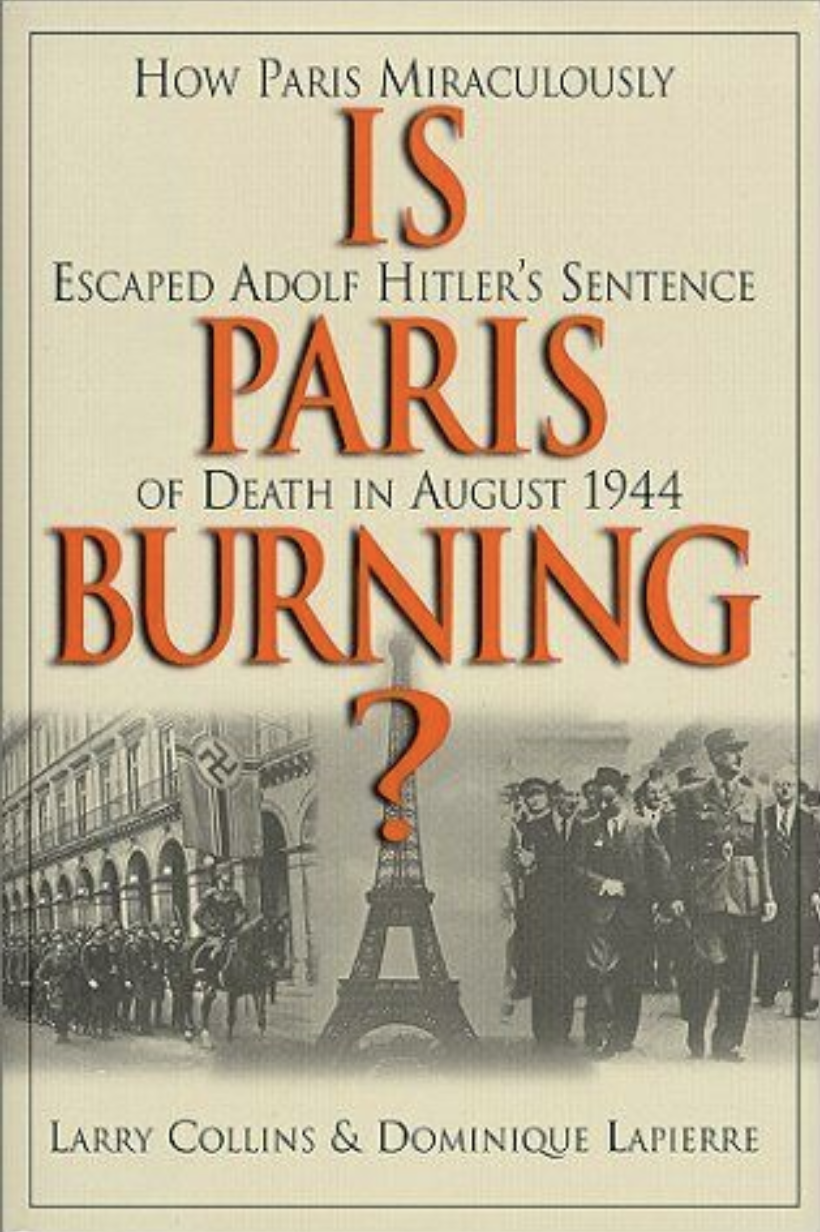 Victor, too, had no idea that somewhere in the frenzied crowd, his future wife was celebrating. Nor did he suspect that his personal story from that memorable time would someday be captured in a classic book about World War II, Is Paris Burning? by Larry Collins and Dominique Lapierre.

How Uncle Victor met Aunt Jackie 77 years ago is one of the vignettes in this non-fiction narrative which depicts events in the week leading up to August 25, 1944, the day Paris was liberated. Until Liberation Day, for years the French had endured numerous frustrations and humiliations at the hands of the Germans, starting on June 14, 1940, when Adolf Hitler’s army first marched into Paris to occupy the city.

I had always intended to read this vintage book, which was originally published in 1965, not only because of the Vrabel family connection, but also because my own father served in Europe during World War II. Then, too, I have always felt an affinity for all things French, having studied the French language and culture from grade school through college and fallen in love with Paris on a trip there in 1995.

This past winter, when I finally read it, I never imagined it would be such a thrilling page-turner. For a non-fiction book, it seemed more like a genuine suspense novel, keeping me riveted from chapter to chapter with portraits of life and death during the Nazi occupation.

While the destiny of the French capital hung precariously in the balance under Hitler’s threat to burn it to the ground, ordinary citizens—shopkeepers, café owners, warehousemen, actresses, medical students—rallied to defend their city. Reading each story, I marveled at how the French people courageously organized resistance efforts, scurrying around carrying secret messages and piling sandbags in front of buildings to create barricades. Page after page, I delved into the scheming minds and raw emotions of the French fighters, German commanders, and American troops as they plotted their next moves. I empathized with soldiers who yearned to reunite with loved ones at home and mothers who agonized over their sons’ fates in battle.

Despite knowing the ending, I still breathlessly waited to see what would occur. Would Hitler raze Paris, destroying the beautiful metropolis which took centuries to build? Would French resisters sabotage his nefarious plans to plant bombs in palaces and museums, under bridges,  and on railways? Or would the Allies arrive in time to rescue Paris from annihilation?

The German commander in charge of executing Hitler’s orders, General Dietrich von Choltitz, deliberated what to do, wavering and procrastinating. Convinced the Führer was insane, the German general was unwilling to be condemned by history as the barbarian who obliterated Paris.

Back in Germany, an angry and impatient Hitler fumed. Furious at the delay, he repeatedly called the commander to ask, “Brennt Paris?” (Is Paris burning?)

As Liberation Day approached, tensions mounted. More conflicts ensued, even among French resistance agents themselves. Killing erupted sporadically around the city. Some Allied soldiers were shot dead by Germans before they even glimpsed Paris.

But once the Allies triumphantly advanced onto the city streets, throngs of Parisians tossed them baskets of fruit and bottles of wine in wild joy at being saved while the Germans surrendered.

In the middle of one jubilant crowd, a jovial Uncle Victor sat in a jeep on the Pont de la Concorde, savoring victory as grateful Parisians jumped up to kiss him. While he struggled to understand the words of a French boy, Aunt Jackie stepped forward, mustering her newly acquired English language skills, as described in the book:

The laughing captain said she could. He asked her for a date. Only, she said, if her mother standing beside her came along. They exchanged addresses, and, seeing the list of names already filling his address book, Jacqueline Malissinet thought to herself she would never see this laughing captain again. She was wrong. He would come back, and in two years the man with whom she had just exchanged her first phrases of secretarial-school English would become her husband.”

After they were married, they had two children and traveled around the globe for many years, dictated by Victor’s military career, then finally settled in a town north of Paris.

Not all stories in the book end so happily. Some end tragically with loved ones lost. But every story is a striking portrayal of heroism in the face of war. Woven together, these tales make “Is Paris Burning?” a rich and ornate tapestry in the history of World War II.

It’s a point of family pride that Uncle Victor and Aunt Jackie became part of that historic tapestry when the Allied tanks descended upon Paris on August 25, 1944.

Diane Vrabel and her husband, Al, live on Arden Road in Mt. Lebanon.