In the previous installment of this blog we discussed heart attacks also know as myocardial infarction. This month we will focus on stroke or cerebral vascular accident, also abbreviated as CVA. According to the American Stroke Association, stroke is the fourth leading cause of death and a leading cause of adult disability in the United States.

In 2013 MRTSA responded to 60 patients in Mt. Lebanon who were experiencing signs and symptoms of a stroke. Not included in this number were the calls to assist individuals who had less obvious signs and symptoms, possibly caused by a stroke. In addition, each year MRTSA will respond to assist may residents who have disabilities due to a previous stroke.

There are several different types of strokes. According to the American Stroke Association, 87% of all strokes are known as ischemic strokes. This is a result of an obstruction within the blood vessel supplying blood to the brain. This can occur when plaque or a blood clot develops in an artery in the brain or breaks loose from elsewhere in the body and travels to the brain. The other type of stroke is a hemorrhagic stroke. A hemorrhagic stroke occurs when a weakened blood vessel in the brain ruptures and interrupts the normal blood flow. Uncontrolled hypertension is the most common cause of hemorrhagic stroke.

Another situation that can occur is known as a TIA or transient ischemic attack. A TIA is caused by a temporary blockage of a blood vessel causing symptoms of stroke which then resolve. This is often referred to as a “mini stroke” and should be taken very seriously as a warning sign of a pending problem.

Recognizing a possible stroke as quickly as possible is extremely important as the ability to treat the stroke is time dependent. Strokes can present with a wide variety of symptoms depending on the part of the brain affected. Among the easier to recognize symptoms is paralysis to one side, speech or language problems, visual problems or memory loss. Speech problems can include garbled speech or the inability to find the correct word to say. A patient experiencing a hemorrhagic stroke may experience a headache which may progress to be the worst headache the person has ever experienced.

More subtle symptoms can include changes in behavior or difficulty with balance. 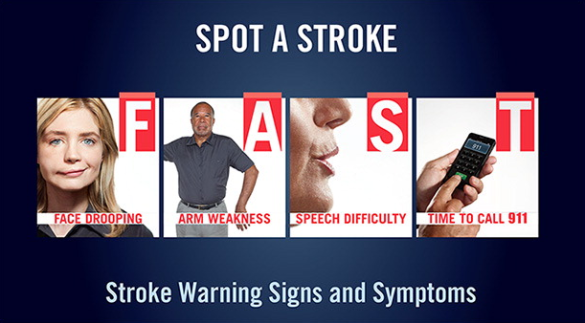 Any individual experiencing possible stroke symptoms should call 911 immediately. As mentioned earlier, stroke treatment is time dependent and three hours from time of onset is generally recognized as the treatment window. In Mt. Lebanon, the paramedics from MRTSA generally will arrive four to six minutes after the call is dispatched. The paramedics will quickly perform a stroke assessment checking certain functions such as facial droop, arm drift and speech. The paramedics will ask what time the symptoms began as this is an important piece of information for the hospital. The patient should be transported to a hospital that has a stroke care program—most area hospitals provide this care. Paramedics will notify the hospital prior to the patient’s arrival so the staff can be prepared. At the hospital, the emergency room physician will assess the patient, who will likely have a brain scan done to determine the type of stroke they are having and determine the best treatment options.

In any event, do not ignore the symptoms or delay the call to 911.

A current radio campaign discusses the sign and symptoms of stroke. I encourage a visit to the American Stroke Association’s website to learn more and to understand the risk of having a stroke. MRTSA offers blood pressure screening at our station at 315 Cypress Way from 9 a.m. to 3 p.m. Monday through Friday.

As always I also encourage everyone to learn CPR and first aid. Classes are available monthly and you can register online or call 412-343-5111 for more information.