Jewelry has been on my mind lately, because an unfortunate burglary resulted in a friend losing many family pieces that, while insured, can never be replaced. I love jewelry, and I have a lot—some valuable, some funky, some family things, some handmade by friends. I remember where I got every necklace, bracelet or ring.

I don’t care much about some pieces, even if they were fairly costly—if I lose an earring I bought myself, I’ll find something else I like. Other pieces, I cherish, not because they were expensive but because of who gave them to me. I don’t even wear some of the things I cherish—I just like knowing they’re there, such as the white rose ring my daughter bought for me at the Markham School holiday fair or the fake sapphire and diamond cocktail ring I snatched (yes, stole) from my mother’s jewelry box a few years ago because it reminds me of her coming into my bedroom to kiss me goodnight dressed in a red satin cocktail dress and smelling of Chanel No.5. Both rings have cheap adjustable bands!

Here are a few of my favorite things: Every day since I was 16, I have worn a ring with a platinum Tiffany setting and a man-made ruby (popular in the early 20th century, so I learned) that my grandmother’s first “real” boyfriend gave her. Two other favorites are small pendants my husband bought when we were first married and didn’t know I prefer chunky jewelry. One is a gold dolphin with tiny diamonds he surprised me with at the Honolulu airport after disappearing for half and hour and scaring me to death. The other is a sparking blue topaz that serves as my lucky charm and never fails to draw compliments from 6-year-old girls waiting with their mothers in grocery lines. 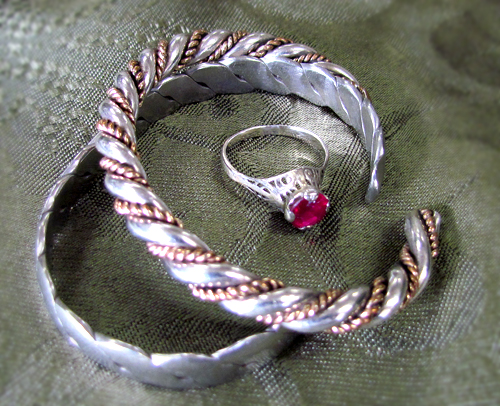 I treasure a bracelet my grandfather created for my grandmother from two slim steel rods when he worked at Dravo and a similar bracelet in gold and silver crafted by a Native American, the first piece of jewelry my husband bought me. Other treasures? A sterling silver monogrammed cuff bracelet my parents gave me in high school; a heavy metallic pendant that defies description—the only thing my dad ever picked out for me himself, and diamond earrings that evoke fond memories of how excited my daughter was when her dad presented them to me. And finally, there’s my late aunt’s fabulous engagement ring, a bequest that touches me because it was her prize possession—my uncle couldn’t afford it until they were married for seven years—and she had no daughter of her own to pass it on to. (This ring is also a problem, for she wanted it to “stay in the family,” making me the future decision-maker on that one.) 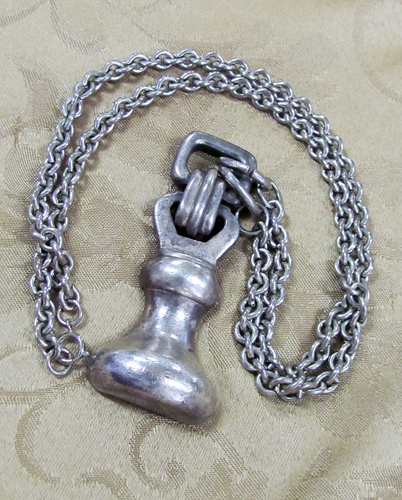 Jewelry isn’t the only thing I like. I like shoes, and thanks to DSW probably have nearly as many as Imelda Marcos. And I collect things—flow blue pottery, eclectic teacups, tole-painted antique trays, old pressed glass wines.

But for me, jewelry received as a thoughtful gift says “love” in a way no other accoutrement or collectible can.