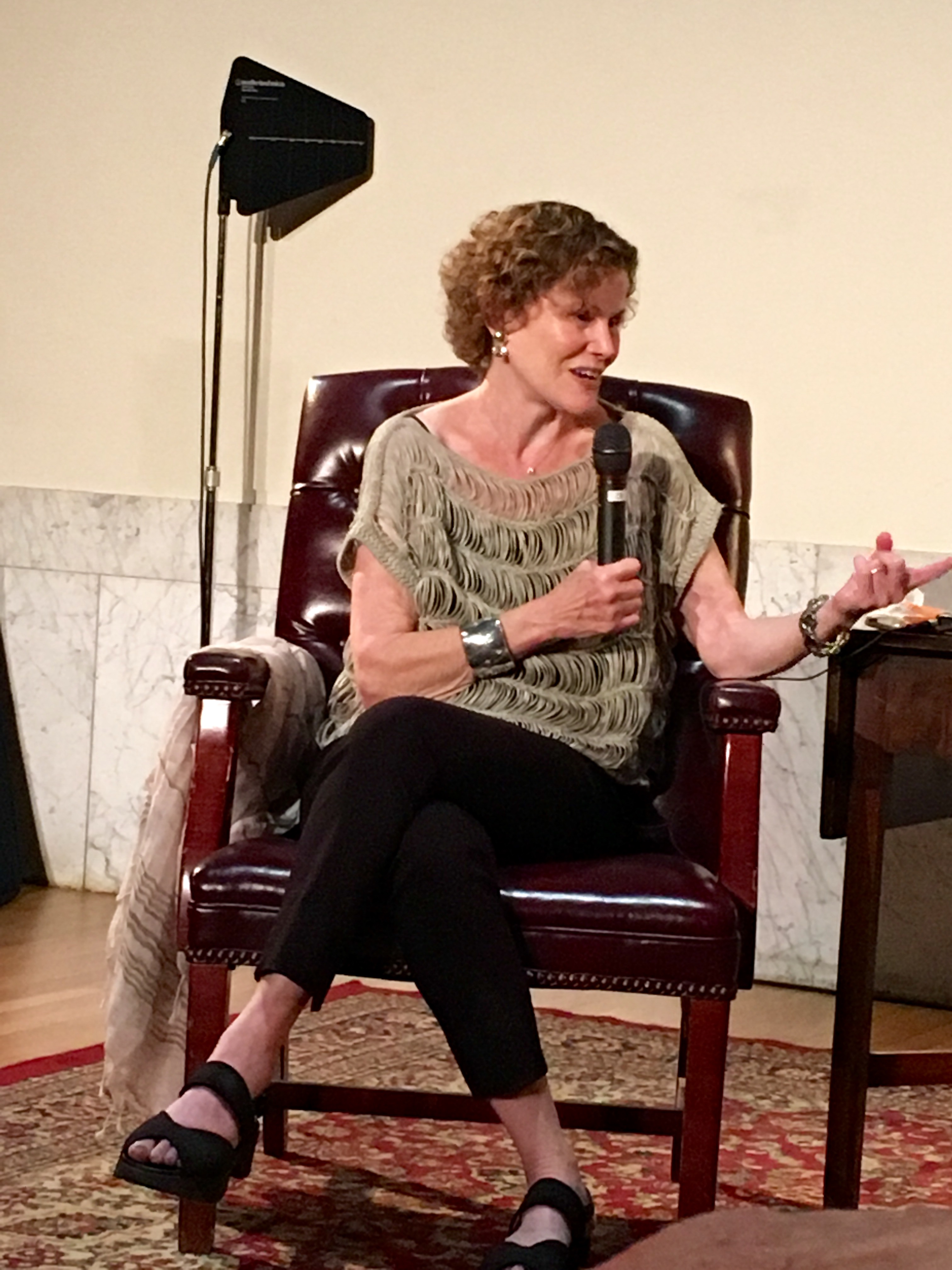 I had to stop myself from reciting, “I must, I must, I must increase my bust….” The famous line from Are You There God? It’s Me, Margaret has been stuck in my head for decades, though the wish itself hasn’t. The author who penned those words was a few feet away from me, and I knew she was so much more than this exercise.

The iconic Judy Blume symbolizes my childhood and adolescence. I was lucky enough to see her last week as part of Pittsburgh Arts & Lectures. Steven Herb, Director of Pennsylvania Center for the Book, talked with her for half an hour and then she answered questions from the audience. Once tickets went on sale in May, the event sold out within minutes.

Not surprisingly, the audience was predominantly female and of my generation. I heard from out of town friends who told me how jealous they were. Clearly, Blume strikes a chord, but why?

My mom remembers how much I loved her books growing up. She says I wanted to read as many as possible. Growing up in the ’70s and ’80s before the YA genre officially existed, Blume fearlessly did what others did not or could not: Wrote the truth. As a friend recalls, “Reading Judy Blume’s books was like having an older sister or favorite aunt who was unafraid to talk about the messy difficulties of growing up. Without an Internet to answer (however inappropriately!) every question, her novels helped me learn about things I didn’t know and also helped me process current experiences.”

We devoured Blume’s books because they were funny, entertaining and well written. What spoke to many of us was how Blume tackled taboo subjects like menstruation, buying your first bra, sex, death and divorce in a way that made them less scary.

Now our kids are reading her books, illustrating how timeless they are. And because she kept on writing, I was able to read new books as an adult, even enjoying a chapter book series on sibling rivalry starring The Pain and the Great One.

During the hour she spent with us, Blume was gracious, witty, engaging and relatable. She answered difficult questions by admitting she didn’t know how to respond, often gestured to her husband for help in coming up with the right word or response, and displayed her trademark candor. She talked about her connections to Pittsburgh, which she was visiting for the first time. Her father worked at the Concordia Club while attending Pitt Dental School, and wed his wife here.

Blume graduated from NYU with a degree in education and had planned on being a second grade teacher despite not liking to teach. Thankfully for us, she became a novelist with a far reach and perhaps unintended effect. An audience member–visibly excited and nervous to be talking to her idol–told Blume that she was an excellent teacher and that Blume’s books taught her so much.

I think that’s one key to her lasting popularity. She was the first real teacher for many of us. After the event, the consensus was that we love her even more now. Her personality matched the person I’d imagined. My friend Julie agrees. She says Blume was “just so funny and honest and totally COOL. And so YOUNG.” Many of us were surprised to learn that she’s 78. Another friend says that seeing her was like meeting an old friend she hadn’t seen in years. “Even though time has elapsed, because of the great bond that created our relationship, it felt like we could pick up right where we left off,” she says.

It’s tempting to vacation in Key West, where Blume lives, and visit the bookstore she owns with her husband. Someone even commented, “I feel like she would totally have dinner with us!” Don’t worry, we aren’t stalkers, but this shows how engaging she was in person. I’m glad I wasn’t disappointed. Too often people in the public eye aren’t the same in person, but this wasn’t the case with Blume. She was so vibrant that someone asked her secret. “Mostly luck… and genes,” she responded.

Blume says she’s not writing any more novels but knows she can’t say for certain because she could be inspired again. After writing for 47 years and publishing 32 books, she’s earned a break. Her legacy is guaranteed, as evidenced by her continuing popularity and 450K Twitter followers.

It’s amazing that all these years later, I can remember lines and plots from her books. Thinking about them brings me back, which makes me feel young and old at the same time.