What happens when you turn down your husband’s choice for your baby’s name? If your husband is David Manchester, lead singer and guitarist in the local band Arlo Aldo, chances are the rejected name (Arlo) will be paired with the name of a famous Italian architect (Aldo Rossi), to form a band name that is difficult to pronounce and even harder to forget.

Arlo Aldo, the indie-folk-alternative-country band (just click this link— it’s hard to explain), is releasing its sophomore album, House & Home on Future Oak Record Co. on Friday, February 26. A release show is planned for Saturday, February 27 at the Commonwealth Press warehouse at 2315 Wharton Street in the Southside.

“It’s going to be a really awesome, over-the-top event,” says Manchester, Atlanta Drive. “We are putting all our excitement into it and making it something really unique and special to give people a break from winter nights.” 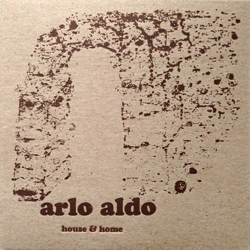 “It is a local celebration,” says Manchester. “The album was recorded locally… We wanted local elements to make it an extravaganza for our combined efforts in putting this together.”

House & Home will be recorded on vinyl, so the band took a very careful approach to the recording process. “There are singles that will get radio play, but you can drop the needle and sit there and enjoy five songs at a time,” says Brandon Forbes, Arlo Aldo percussionist.

“If you’ve seen our live shows, you will know some of the songs… but we redid many of them for the Future Oak recording,” says Forbes. “It’s completely interesting. We broke the songs down to their basic components for the recording, and then we left things out or made additions.”

Specifically, two of the songs, Sleep and House & Home, which were self-released by the band in 2014, have been altered throughout the recording process. The band changes its sound with relative ease, as it has adapted to various changes in environment and instrumentation throughout the years.

Arlo Aldo has been featured on WYEP and plays often at Club Cafe, Pittsburgh Winery, Thunderbird Cafe and Brillobox. It also does living room performances, which requires songs be stripped down to the basics. “The vocals are often peoples’ favorite part… I always joke and say we shouldn’t even have a drummer in these living room shows,” says Forbes (“But then we wouldn’t have any sex appeal!” Manchester exclaims).

The band began in 2010 with Manchester on guitar and vocals and Ariel Nieland on the organ and singing harmonies. Neiland introduced Forbes, her work friend, into the band on percussion, and for a while they were a trio. Then, after urging from their producer to acquire more instrumentation, they took on Susanna Meyer on vocals and bass and Jessica Hoffman on viola. “So we’re up to five. By our next album, we will be ‘Arlo Aldo, featuring half the philharmonic’,” says Manchester, who sometimes performs in various combinations with the other band members including two recent shows in Michigan with Hoffman.

Each of the band members have families of their own, and Nieland and Forbes are now married to each other with a year-and-a-half-old daughter and one on the way. Manchester recalls going to the Warhol Theater with them to see one of their favorite bands, Low, when they were still keeping their relationship under wraps. Forbes stepped out for a few minutes when Manchester turned to Nieland and said, in a sing-song voice, “So how much do you like him?”

Manchester notes that audiences can’t always predict what version of Arlo Aldo they are about to see, but audiences can be assured that they will see the full band at the release show on February 27, and they will be eager to show off their hard work on House & Home.

“You can put your own experiences into the songs and really connect with the music,” says Manchester. “The album has this sense of romantic sentimentality, with ideas of love, loss and death. The themes are relevant to anybody… it’s about loving and cherishing what you have before it’s gone.”