Organizers and sponsors at the Mt. Lebanon Sunrise Rotary Club say the change will be good.

“Our old space was hidden. In the Academy parking lot, people can just happen upon it,” says organizer Elaine Rosenfield, who came up with the idea of an arts festival as a way to raise money for the club back in 2001. President Nate Nevala says the new venue will draw more customers this year, not only because it is closer to the business district but because it will be part of the inaugural Plein Air Mt. Lebanon arts festival, October 2 through 7, sponsored by the Mt. Lebanon Partnership.

Since its first year, Art in the Park has continued to grow, bringing in more than $30,000 in 2010 for multiple Mt. Lebanon organizations. Nevala attributes the success of that year to the fact that the Rotary Club reached out to bigger sponsors. Rosenfield says the event is a hit because it is unique in the South Hills. “For all other arts festivals, you have to go downtown…and a surprising amount of people here don’t like doing that.”

Rosenfield recruits quality artists and crafters for the event, which offers a “Best of Show” award followed by second place, third place and five runners-up. New artists come every year, but there are some who have been coming for years. Only three artists have been at Art in the Park every year: watercolorist Barry Jeter, watercolorist Ruth Richardson and painter Mary Lois Verrilla, known as “The Woman Who Paints Pittsburgh.”

The high school’s new 15-member Interact Club has helped this year with fundraising and marketing. An offshoot of the Rotary Club, Interact gives high school students the chance to develop leadership abilities through service. Michael D’Orazio, a 2012 graduate of Mt. Lebanon High School, chartered the club; his brother, sophomore Vince D’Orazio, will take over as president this fall. 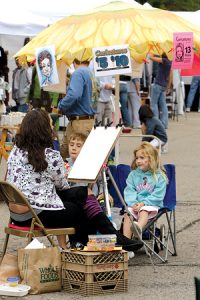 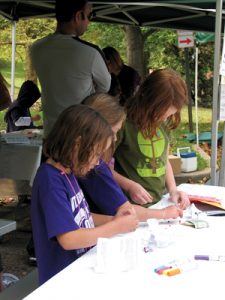