One thing is certain about Saturday’s Uptown Winterfest:

The beer will be fresh. And plentiful. And good.

It won’t be homebrew, like it was last year, but it will be hometown brews. 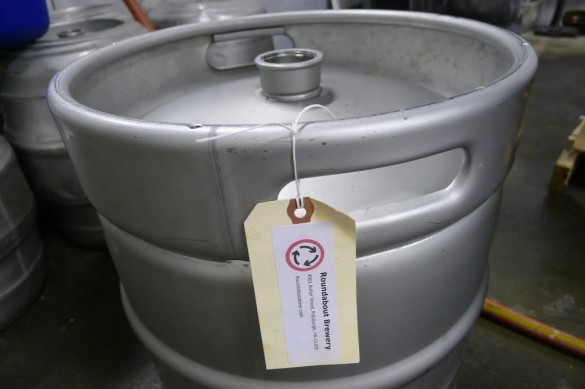 I rode along Thursday night as commercial districts manager Eric Milliron and his volunteer beer liaison, Daniel Pipetone, drove to Lawrenceville’s Roundabout Brewery to pick up what they thought would be a sixtel, or one-sixth of a keg, to sell at the fest.

They wound up getting a full keg — 15.5 gallons — depicted above. Roundabout’s Steve Sloan wrestled the 160 pounds of it into the back of Eric’s Subaru, with a tap assembly he’d quickly and deftly built.

The keg is full of Steve’s HY-PA, which he describes as a hybrid of a lower-alcohol pale ale and a hoppier India pale ale, made with Motueka hops (from New Zealand, like his wife) and Centennial hops (from the U.S.).

In between filling other customers’ sampling cups and “growlers,” the half-gallon jugs in which the couple sell draft beer for takeaway, Dyana Sloan poured Eric, Daniel and me tastes of HY-PA, as well as of Rusted Route Amber Ale, New Zealand Summer Winter Warmer, Beelzebubba and Long Black Stout.

On this his first visit to the six-month-old brewery, Daniel, the Mt. Lebanon graphic designer and homebrewer behind Straw Bale Brewing, was in heaven. He loved the stout so much he bought a half growler, or “round,” of the coffee stout to take home and share with his wife.

Today, meanwhile, Eric was going to pick up more local beer, which volunteers will pour and sell during the Mt. Lebanon Partnership’s third-annual festival, which runs from noon to 3 p.m. at Clearview Commons. Admission is $15 and proceeds benefit Relay for Life Mt. Lebanon and the Partnership.

The beer will go down well on what’s supposed to be a warmer-than-it-has-been day with the various chilis that attendees can try — from Mt. Lebanon restaurants, other restaurants, as well as the Mt. Lebanon Police, Mt. Lebanon Fire Department and Medical Rescue Team South, who will be competing amongst themselves.

One of the local restaurants in the chili cook-off is Hitchhiker Brewing Co., which is to open as a brewpub on Castle Shannon Boulevard this spring. Owners Gary and Serena Olden won’t be pouring their beer, but there’s to be Hitchhiker beer in their chili.

Other local beers you can try, for $5 each, will be:

You also can support this good cause by entering a 50/50 raffle as well as a raffle for a big gift basket from Mt. Lebanon’s Fresh Market.

At the raffle table, you can drop off your ballot rating the chilis, the table displays and the brews.

Afterwards, if Eric and Daniel need help returning the keg to Roundabout, I am ready to serve. By then I should be able to easily lift it.