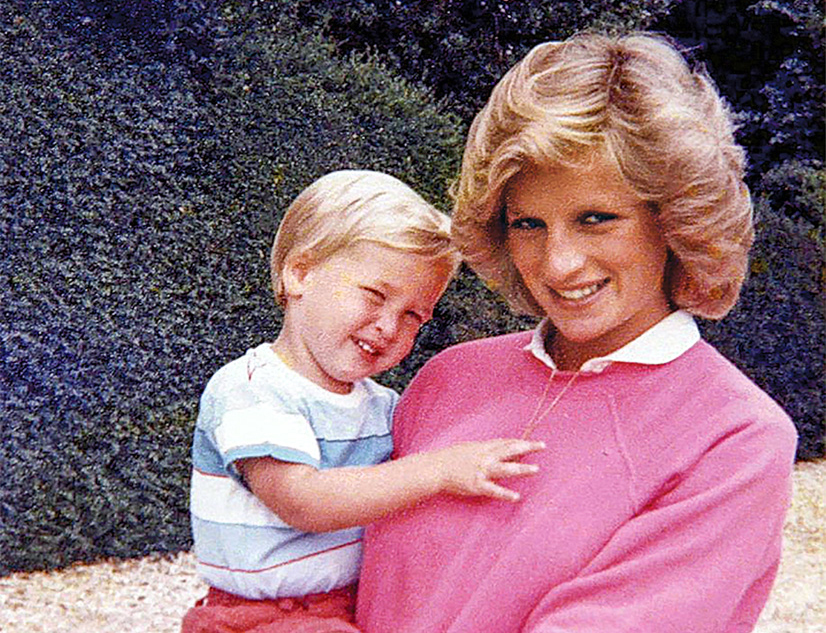 On  August 31, 1997, I was a patient in the psychiatric ward of St. Clair Hospital, watching TV in the break room. Suddenly an image of Princess Diana flashed across the screen, as an anchorman announced she had died in a car crash in Paris.

If I could have felt anything at that moment other than a flicker of disbelief, it would have been sorrow for Di and her boys. But I was suffering from severe postpartum depression, so I couldn’t feel normal emotions at all. In a murky chamber of my mind, I remember thinking I felt bad for Princess Di, but I couldn’t dwell upon her tragedy because I was experincing my own trauma. Seven months earlier, I had given birth to a baby boy, Mark, a long-wished-for event that should have made me deliriously happy.  But after Mark was born, instead of being swept away by joy, I gradually became despondent, sinking deep into a black pit, and no matter how hard I strove, I couldn’t crawl out.

That August day, I found myself hospitalized for the third time that year, once again seeking a cure for my illness while I absorbed the unexpected news about Diana.

I had felt an affinity for Princess Di ever since she became engaged to Prince Charles in 1981, introduced to the world as Lady Diana Spencer. Since her name was similar to mine, co-workers quickly dubbed me “Lady Di.”  The nickname stuck.

I admired Diana’s rebelliousness, especially when she bore William and Harry and followed her own heart as a “mum.” Being irreverent, Princess Di never quite fit in at Buckingham Palace with its stuffy rules and elaborate pomp that only magnified her youth and diffidence, spurring the media to call her “Shy Di.”

Though I never had lived in a royal palace, when I entered the workforce, like Princess Di, I, too, felt out of place—intimidated by my superiors and overwhelmed by office politics.  In the workplace, stress was my daily bread, and 20 years of unrelenting stress undoubtedly contributed to my postpartum depression.  I was also 41 when I had Mark and slept fitfully for the last three months of pregnancy, overly anxious about a condition I had that ultimately caused a surgical delivery instead of a natural childbirth.

Still the depression snuck up on me surreptitiously, like a spider on tiptoe skulking across the floor.

The first month home with Mark, I was cheerful and active. A torrent of cards and gifts poured in, and I busily wrote thank-you notes and chatted on the phone between bottle-feedings and nap times. But the second month, I slowly became detached and apathetic, no longer feeling pleasure in caring for my son. Like a robot, I mechanically fed, bathed and dressed Mark, playing with him listlessly, roaming around the house aimlessly, seeking solace for this mysterious malaise.

At mealtimes, I couldn’t eat. At night, I couldn’t sleep. Having lost interest in ordinary activities, I couldn’t concentrate on simple things like Mark’s feeding schedule or make minor decisions like what to cook for supper. Worst of all, I felt dead inside like a piece of dry wood. My face was a stone mask, blank, hollow and joyless, reflecting my inner void. I felt isolated, alienated, paralyzed and trapped.

What was happening? No one understood.

My husband was unwavering in his support, taking a leave of absence from work to watch Mark but each day becoming more disheartened by my dysfunction. Equally supportive but also distraught, other family members were bewildered by my waning interest in motherhood and my eventual transformation into a shadow. “This should be the happiest time of your life,” declared Mom. “What’s wrong with you?”

“Snap out of it!” commanded Dad. “Go see a doctor!” pleaded Sis.

Taking her advice, I saw a psychologist who diagnosed postpartum depression and I checked into three different hospitals when I became truly desperate and felt like I wanted to die. Medical professionals tried multiple treatments—counseling, drugs, group therapy–but nothing worked. As a last resort, doctors proposed electro-convulsive therapy, commonly known as shock treatment, warning  that one in 10,000 patients died from it.  I had fallen into such a bottomless shaft, I didn’t care.

Or perhaps I did care. While contemplating the risks of this potential treatment on the same day I learned of Diana’s death, I had a disturbing thought. Diana would never see her boys grow up. That’s not something I wanted to happen to me, not even in my darkest hour. The moment I realized that, I felt a supreme urgency to survive and be a mother to Mark.  Yet I was beset by a disquieting sensation that maybe it was too late.

During her brief life, Diana also battled depression but bravely coped with it by traveling around the globe and advocating for others, including consoling AIDS patients and denouncing land mines in places like Africa. If the “People’s Princess” could overcome her tribulations with the whole world watching, why couldn’t I? Crossing my fingers, I consented to six shock treatments and within two weeks I was cured.

Twenty years later, the joy of my recovery is still tinged with sadness, inextricably linked to Diana’s death. Tragically, Di didn’t live happily ever after, despite her storybook wedding. But she helped me endure the most difficult struggle of my life. So from one Lady Di to another, I give my heartfelt thanks.

Have a story to tell? Submit yours for consideration to smorgans@mtlebanon.org.