The fourth annual Pittsburgh Craft Beer Week runs from April 17 through 26. More of it than ever is happening in Mt. Lebanon, and there is more Mt. Lebanon in in the event, as well.

The promotion of good beer is organized by the Pittsburgh Craft Beer Alliance, a non-profit comprised of breweries, distributors and restaurant and bar owners. Its president happens to be Shady Drive East resident Andy Kwiatkowski, who is the head brewer at Hitchhiker Brewing Co. on Castle Shannon Boulevard.

One of more than 300 PCBW events is being hosted by Hitchhiker: The Hardway Homebrew Competition. Last month, the brewpub invited area homebrewers to brew and submit a commercially viable beer for this contest, named after the controversial Super Bowl ad for Budweiser that tweaked craft beer in part by saying Budweiser was brewed “the hard way.” Twenty one are submitting brews. From noon to 4 p.m. on Sunday, April 19, judges and the public will each have a hard but good time picking two winners, to be announced at 4:30 p.m. Mr. Kwiatkowski will brew a batch of each to sell at the brewery (“unless the same recipe is selected,” notes owner Gary Olden). 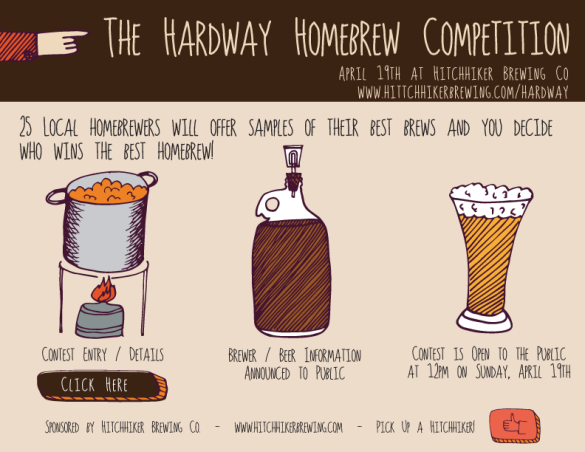 Mr. Kwiatkowski says he doesn’t know what brews he’ll be helping to judge and doesn’t want to, because he wants to judge each one “as a blank slate.”

Meanwhile, Craft Beer Week events also are planned at area watering holes. For example, Bado’s Pizza Grill & Ale House  on Beverly Road is holding a sampling of a different craft brewery each day. From 7 to 9 p.m. on Friday, April 17, it’s Green Flash, and they’ll be tapping a keg of Alpine Duet IPA, too.

From 5 to 8 p.m. on Tuesday, April 21, BRGR at The Galleria is holding a “Great Lakes Hoppy Hour Crate Night” and pouring flights of four brews.

From 9 p.m. to midnight on Friday, April 24, the Korner Pub on Bower Hill Road will present “All Things Athens, Ga.,” pouring brews from the Terrapin Brewing Co. to the sounds of R.E.M., The B-52s, Widespread Panic and other bands who also hail from there. It’s doing other PCBW events, too.

From 8 p.m. to midnight that same day, Brews Brothers on Mt. Lebanon Boulevard is holding a “Firkin Friday” featuring a firkin of real ale from Finch’s Brewing Co.

Across the region, events range from simple tappings and tastings to beer-and-yoga brunches, bike rides and much more. Mad Mex South Hills on Greentree Road is serving up Gobbleritos and Southern Tier Pumking pumpkin beer for its “Thanksgiving in April” event on April 21.) Events will continue to be added. You can see the full calendar, which lets you filter events by neighborhoods including Mt. Lebanon, at http://pittsburghcraftbeerweek.com.