You first heard from her in Mt. Lebanon Magazine a little more than one year ago. In fact, our interview became the most-read article on lebomag.com in 2015. It just goes to show that pop star Daya has a way of creating buzz.

Most in Lebo know her by her birth name, Grace Tandon. Today, her stage name, Daya, has become a household one. Her hit single “Hide Away” made its debut last summer on outlets like Sirius Satellite Radio, Google Play and Spotify. Later, local radio stations snagged it, and before she could blink, her song was playing on every station across the U.S. and around the world. Daya built on that individual success by partnering with electronic stars The Chainsmokers. Their song “Don’t Let Me Down” went double platinum because of the unique rhythm and voice of Daya. It’s a song that she recently performed with the Chainsmokers on stage at the prestigious Coachella music festival.

Now it’s time for Lebo’s top singing star to unveil her first full album, Sit Still Look Pretty, on October 7. The album will feature 14 songs, including all six from her EP, Daya. Plus, fans purchasing the new album at Target on October 7 will have access to three new, exclusive songs. It’s an exciting time for the 17-year-old to see her hard work come to fruition. 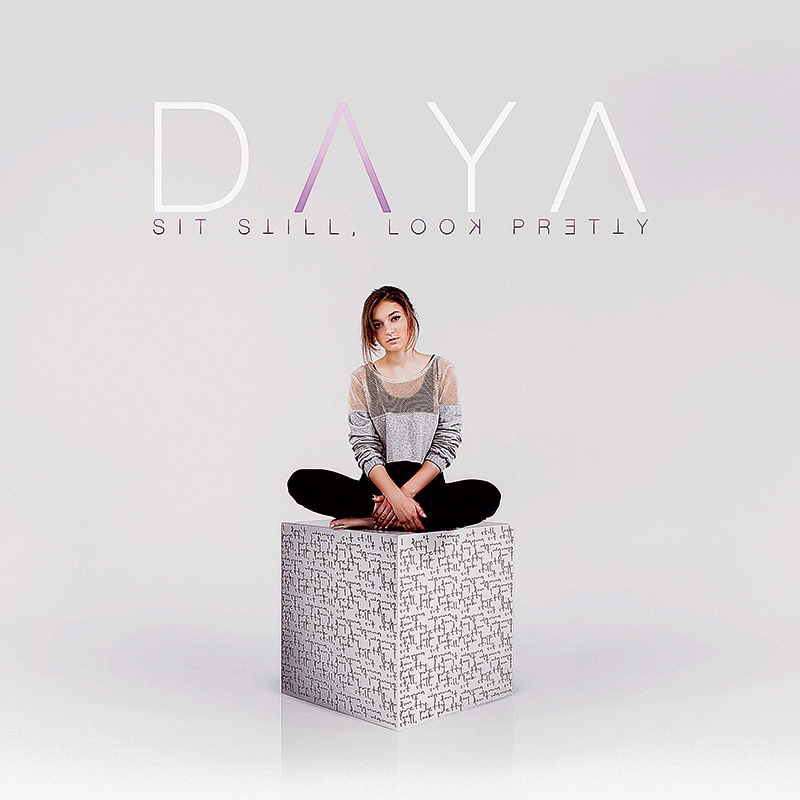 “Basically I’ve been in Los Angeles for the past few weeks putting it all together,” says Daya. “I’m super stoked for the new songs. It’s going to be a little different than some of the songs that I’ve already done.”

A lot has changed over the last year. She has had the opportunity to appear on national talk shows and let fans get to know her personally. She’s appeared and performed on NBC’s TODAY show and CBS’s The Late Late Show with James Corden.

“It’s been super fun, and I love James Corden,” she says. “It’s a surreal experience. I love to be on talk shows and let people see me for me.”

Her talents have propelled her to sing in Times Square on New Year’s Eve and perform at the White House Easter Egg Roll where she met the president and the first lady.

She has been able to rub shoulders with other celebrities while touring across the country. On the James Corden show, she was able to meet multi-platinum singer Josh Groban. Other singers have taken notice and often let her know that they enjoy her music.

“I’ve done a lot of shows and I’ve enjoyed being around singers like Shawn Mendes, Alessia Cara, and Troye Sivan,” she tells me.

Her newfound fame has her traveling across the nation and internationally. It has exposed her to experience places that she’s only dreamed of, like Europe.

“I went Oslo, Norway and absolutely loved it,” says Daya. “I love the culture, fashion, and architecture. I also loved Miami. I had never been there before. It integrates so many cultures; it was so authentic, especially the Cuban food. It was so cool to see.”

While many things have changed, Daya relies on the support of her family to keep things normal and familiar when she needs it. This summer, she and her family went camping — something that the Tandon family has done since she was a young child.

“My parents (Hans and Christine) have been so supportive,” she says. “It has been exciting to see it all come together. My sisters (Rachel, Celia, Mariana, and Avery) are super encouraging. It’s really cool for them and they have been able to travel with me while touring.”

Last spring, Daya was able to attend her prom where two of her songs played, which was surreal for her. She also earned her diploma from Mt. Lebanon High School and walked at graduation with her classmates.

“A lot of aspects have changed for me,” says Daya. “I just decided to do senior year online and go on tour. ‘Hide Away’ has helped propel me to where I am today.”

And now the part of her life where she has become a role model comes into play. Young girls and fans look up to her, play her songs on repeat, and check in on her on social media every day.

“It definitely creates a lot of pressure to be a role model,” she says. “I have to be very conscious of what I say and even what I wear every day. You just have to be yourself. I have learned to be mindful of others.”

Growing up in Mt. Lebanon has helped shape her into the singer that she is today. And something that she is very grateful for.. “I really appreciate what the Lebo community has done for me,” she says. “Every time I come back home I really enjoy going out and being back with my friends.”

Check out her music at theofficialdaya.com.