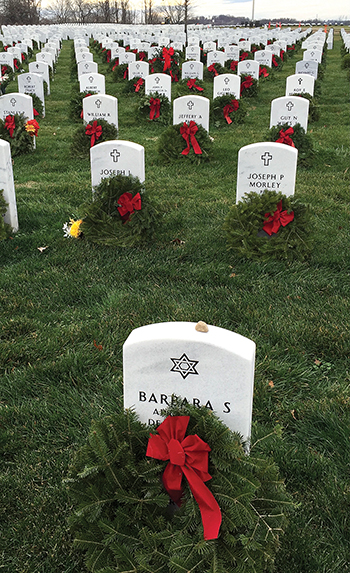 What is this photo about?

This is my mother’s grave, at the National Cemetery of the Alleghenies, in 2015, six years after she died. The image illustrates a perfect dichotomy.

My mother was born Jewish, and grew up in a fairly observant family in Morristown, New Jersey.

My father was born Catholic, and grew up in a fairly observant family in Manchester on the North Side before moving to Green Tree.

When my parents met at the USO in New York City, they fell hard. They got engaged, moved back to Pittsburgh, married in 1963 and had me four years later. At that point, my father was lapsed in practicing his religion after a disagreement with the church surrounding his own father’s death and his divorce from his first wife. So he gave full approval to my mother raising me Jewish.

Growing up, December was always odd. People would ask me if we “celebrated both.” We didn’t. I had a Christmas tree, we had Christmas cookies, we decorated the house in lights and sent “Happy Holidays” cards. But that’s not truly “celebrating” Christmas. We celebrated Chanukah. And yes, I got presents for both, and Santa came down my chimney. My parents did not want me to feel left out in a Pittsburgh suburb with zero other Jews.

Back then, you were one. Or the other. Never both. And I wasn’t both. But I was … something.

To wit, my mother would have hated this picture. That the Wreaths Across America effort results in someone visiting my mother’s grave each December and placing a wreath on it, meaning she was honored by another individual, would have meant nothing to her because wreaths belong to the other. In the post-World War II environment she knew, you had to be careful of such things.

But I like to think that today, we can be many things, and those things don’t have to fit into boxes, or even gift boxes. We can be this and that and a little of something else without being other. My hope this holiday season is that the pieces of those things have meaning and love and help to join us all together instead of pulling us apart.

So even if you don’t “celebrate” Christmas, I hope that when you hear the bells ring out in Mt. Lebanon this season (visit Katie Wagner’s story about our local church bells), you think of all the people you love, what you share and what you can learn from people who are not like you. Happiest of holiday seasons to everyone!