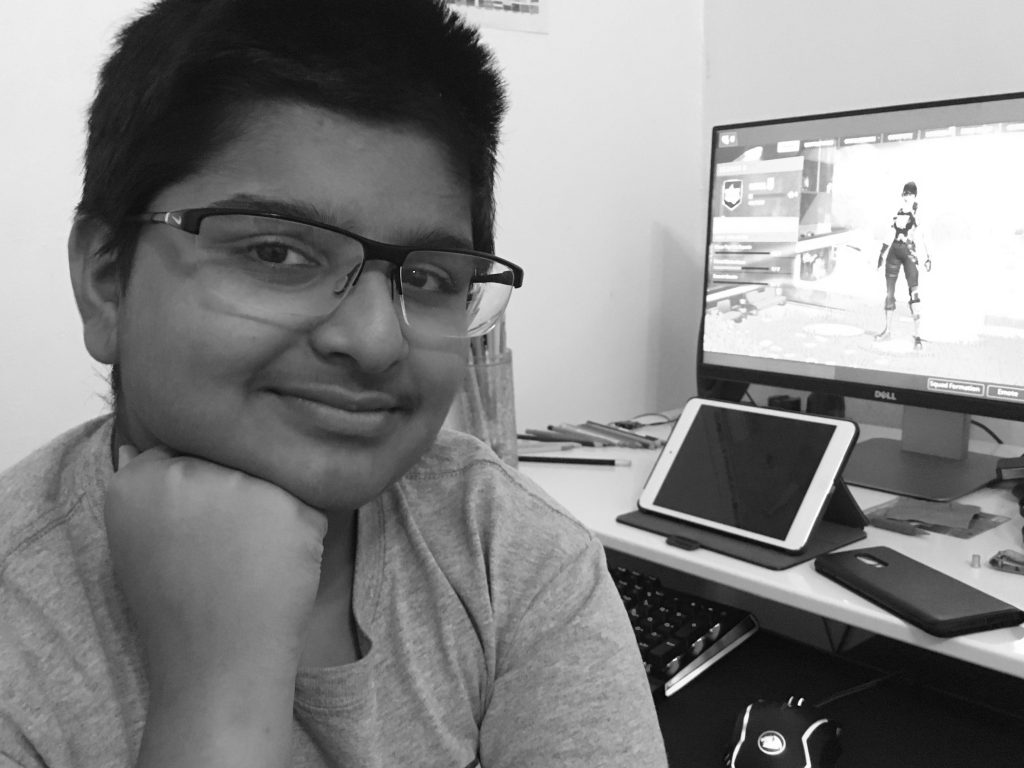 It can be difficult for those uninitiated in online play to understand the alternative reality that immerses gamers of all ages. Rohan Deepak of Clemson Drive is an expert in navigating this community, so much so that he often chooses to spend time with his friends online versus in person because of the greater level of play and interaction they can achieve together inside the digital world. One game they play is Fortnite.

Similar to Minecraft, Fortnite is a free online video game that has become a cultural phenomenon since its initial release in 2017. The Fortnite universe is set on post-apocalyptic planet Earth and the world has been overrun by zombie-like creatures called “husks,” so the game is ultimately about survival. Epic Games has now released three different iterations: Fortnite: Save the World is a cooperative shooter-survival game allowing up to four players to cooperate on missions; Fortnite: Battle Royale is a player vs. player game where up to 100 players fight to be the last man standing; Fortnite Creative is a single-player “sandbox game,” meaning it allows the player to explore the Fortnite universe and create their own battle arenas, race courses and more—Epic Games rewards players’ ingenuity by making some of the best creations available to all players in Battle Royale.

“If you really want to learn, you can watch other people play the game,” Deepak suggests for those who want to try the experience for themselves. “It’s exciting.”

In his Fortnite reality, Deepak seamlessly morphs from a stereotypical male hero with exaggerated muscles to a fairy-winged warrior female with purple hair and then to a distorted monster that appears to have an ice-cream-cone head. These personas, called skins, can be earned through successful play or purchased, but Deepak says he’s never paid for any of his dozens of likenesses including a ghost pirate, aliens and a giant banana.

Limits in reality like gender aren’t a factor in online play, where cool design and efficacy are key.

“Some of the models of the skins just are better as one of the genders,” he said. “It shouldn’t matter. What you are playing in the game doesn’t reflect who you are in real life.”

He also says the perception that Fortnite is only a first-person-shooter game is false. While in part of the game it is possible to take on as many as 99 live opponents, the game also features quests where a single player or groups of friends challenge computerized monsters, the ability to build an area to share, and obstacle course areas.

“Whenever Fortnite first started, it wasn’t like a PVP (player versus player),” he said. “It was player versus the environment, like AI (artificial intelligence). There were monsters you just had to kill. There was a storyline.”

“All of the worlds and stuff can be adventures,” said Deepak, who also plays other games like Rocket League, a game of soccer played with race cars.  Deepak first started playing online games a few years ago. “I played on the Wii U (a gaming console) with my dad. I think that’s where we started playing the most.”

Deepak says the perception of the game as interaction between gamers from all around the real world together is false because speed is key in making the challenges fair. So only gamers connected to servers in the same geographic region actually have the opportunity to play each other.

There are, however, opportunities to make new friendships.

“My friends are on quite a bit of the time, usually at least one person. Though a lot of the time I’ve been playing online recently with other people over the internet.”

Part of the attraction of Fortnite is its availability as a free download on computers or gaming consoles. Deepak learned about it at a sleepover and could almost instantly try out the fun for himself. Now, he’s an accomplished player who has access to a dazzling array of realities, some of which he personally built while he invested about an hour and a half a day in his digital community. Modest and bashful in real life, with the tap of a few keys, Deepak is a force to be reckoned with.

Vocabulary necessary for tackling a conversation with a gamer

AI – Stands for Artificial Intelligence and is used in cases where a computer challenges and adapts to a human player.

Battle Royale – a version of the game involving up to 100 people.

Bot- a computer playing against a human or a human who is so bad at the game that they seem to be computerized.

Chat room – an area of a game where friends can go to talk.

Checkpoints – the point in the game to which the character returns after failing a challenge.

Console – a terminal designed specifically for gaming and that displays on a television screen. These include PlayStation, Wii, Nintendo Switch and Xbox.

Creative – a private style of play where building, battling friends and collaboration are possible.

Dropping – Initial entry into a game area for play.

Drop point – the location where a player chooses to enter the game.

Emotes – dances and movements characters can use.

Map – an area in the game that can be designed by the company or individual gamers.

Parkour – similar to the urban gymnastics and obstacle courses in real life, these are physical challenges that can be mimicked by some games.

PVP – short for Player versus Player, is a game in which at least two human players challenge each other. Through the internet, these players are likely to be complete strangers.

Replay – the ability to save a good game for future viewing.

Rocket League – a game that includes elements of bumper cars and soccer.

Skin – the appearance of the character in Fortnite.

Solo – a game in which a single player takes on 99 other people until only one remains.

Respawning – Reentry into the game after being killed in play.

V-Bucks – Fortnite currency that can be earned or bought.

YouTuber – a person who shows their gaming skills through online videos and discussions on YouTube’s video hosting website.