Letters in literature and film frequently stir the plot. The power of the letter moves the story in works such as Atonement, Tess of the D’urberbilles and The Shawshank Redemption. In Casablanca, who can forget the weeping words dripping down the page as Rick leaves Paris.

In the following films—two vintage, two modern— letters twist the plot and the characters in unexpected ways. 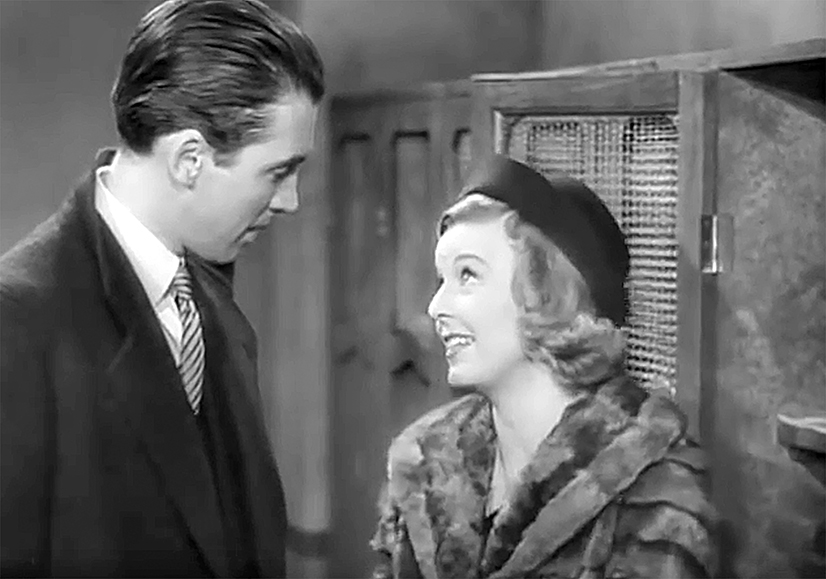 Ernst Lubitsch, a Jewish-Hungarian immigrant, directed some of Hollywood’s finest urbane comedies. Right after getting Greta Garbo to laughter in Ninotchka, he delighted audiences with this film set in Budapest in 1940. Matuschek and Company is a cozy shop that sells gifts and trinkets. In the opening scene, we meet the shop’s  close-knit workplace family. Five minutes into the story, Alfred Kralik (Jimmy Stewart) shares a quiet moment in the backroom with his kindly friend, Mr. Pirovitch (Felix Bressart). Kralik tells Pirovich that he responded to an ad in the newspaper: “Modern girl wants to correspond anonymously on cultural subjects with intelligent, sympathetic young man.” Kralik is smitten with his “Dear Friend,” and she with him as both construct lofty prose to impress each other. All is well until Klara Novak (Margaret Sullavan), a prissy know-it-all wearing a perky hat, is hired. Everyone likes her but Kralik, and he and Klara have their first biting verbal exchange in the stockroom in  a scene that demonstrates the director’s brilliant touch. While they shuffle boxes in a corner, the camera draws us into an intimate but tension-filled moment. Miss Novak patronizingly charms Mr. Kralik until he realizes she is tricking him into letting her off work for the evening. When he catches on, the barbs fly, and Klara, taut with irritation, boxes in hand, flips her head and in her best Margaret Sullavan breathy, haughty voice, concludes, “Mr. Kralik, I don’t like you.”

Kralik discovers Klara is his letter-writing “Dear Friend” and delights in deceiving her. With her nose in the air, she compares her brilliant letter writer to Kralik: “It’s difficult to explain a man like him to a man like you.” The audience loves being in on the deception, which continues until the last moments of the movie.

FAVORITE SCENE: In the Café Nizza, Kralik heckles Klara into a knot of anxiety. The timing, body language and dialogue demonstrate the synergy among Lubitsch, Sullavan and Stewart.

TRIVIA: Stewart and Sullavan made four movies together. Sullavan gave him his start when she insisted he get the lead  in the forgettable Next Time We Love. After all, he was her ex-husband, Henry Fonda’s, best friend.

A sense of dread accompanies the central scene of 45 Years, as 70-something Kate ascends creaky pull-down attic steps. Like a horror movie warning, we want to whisper:  Don’t go in the attic! Even Max, the dog, senses Kate’s curiosity will reach a devastating conclusion.

In the perfectly crafted, sharply focused film, Andrew Haigh reveals the consequences of an official government letter delivered to Kate’s husband, Geoff. Reading the letter, Geoff tells Kate “They found her.” Seems that 50 years before while hiking together in the Swiss Alps, Geoff’s girlfriend, Katya, fell to her death, her body buried in an icy glacier. Global warming has begun to melt the glacier, and Katya’s frozen, preserved body has surfaced. Kate understands how this news pulls Geoff back to a dark memory of his youth, but to her, it is nothing more than unfortunate timing—in five days she and Geoff will celebrate their 45th anniversary with a party that will recapture moments from their mid-1960s wedding. But something isn’t right. Geoff grows increasingly distant, prompting Kate to ask casual questions about the tragic event 50 years ago. Charlotte Rampling received an Academy Award nomination for capturing Kate’s inner turmoil, as Geoff reveals chinks in the story of his hiking trip with Katya. Tom Courtenay masterfully conveys Geoff’s unease as he wrestles with old memories. In an exchange that captures the essence of male/female misunderstandings, Kate snaps, “You could have just told me,” to which Geoff maddeningly responds, “I thought I had.”

Andrew Haigh based 45 Years on a 12-page story, In Another Country, by the British writer David Constantine. Haigh shot the film in sequence with no rehearsals and very little editing. In one delightful, spontaneous moment Rampling and Courtenay capture marital intimacy as they dance around their living room to Lloyd Price’s Stagger Lee. Nostalgic snippets of 1960s music float through the story—reminders of the couple’s past. At the party, Kate and Geoff re-create their wedding dance, swaying  to The Platters’ Smoke Gets In Your Eyes. In the breathtaking final movie moment, Rampling’s face and body language reveal the emotional toll taken by the letter. The scene fades to black, and the song changes to The Moody Blues’ throbbing Go Now. This is a story about what we remember, what we pretend to forget and what we choose to forgive.

FAVORITE SCENE: Kate’s seven silent minutes in the attic demonstrate the power of visual literacy. Film works best when it shows rather than tells.

TRIVIA:  Charlotte Rampling and Tom Courtenay  worked together in the 1973 film Night Train to Lisbon. 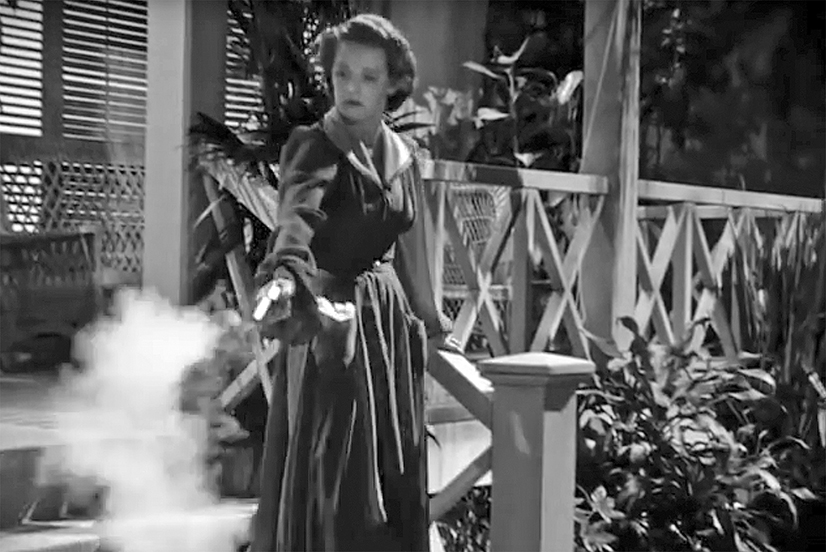 The Letter’s famous opening scene is a wordless two-minute tracking shot that creeps through a sultry, moonlit Malayan rubber plantation. Workers languish in hammocks, tossing restlessly in the heavy night air. A woman stumbles out onto a veranda disrupting the night by wildly shooting at a fellow in a suit. Before anyone speaks a word, Bette Davis, as Leslie Crosbie, tilts her head to stare at the moon that is almost as large as Bette Davis’s eyes. Leslie claims she killed the brutish Geoffrey Hammond in self-defense after he tried to seduce her. The British community in Singapore and Leslie’s perpetually long-suffering husband, Robert, played by Herbert Marshall, trust the judicial system to save Leslie’s neck. As Leslie’s friend and defense lawyer, Howard Joyce, James Stephenson portrays the controlled-yet-conflicted hero who senses something amiss in Leslie’s story.

No one could command a scene quite like Bette Davis. Her dramatic body language, popping eyes and exaggerated enunciation are almost caricatures. Director William Wyler tamed her physical eccentricities. In The Letter, she fidgets rather than flails. Her fingers perform hand ballets with flowers, handkerchiefs and scarves. She keeps her hands busy making lace, using a stabbing technique that is another form of fidgeting. After the murder, Leslie waits in jail. Trusty lawyer Howard visits her, and the seven-minute uncut scene pivots the story. Leslie sashays into the visitor’s room flirty and confident of acquittal. She tells Howard she is fine—making lace and worrying about poor Robert. But she twists and twists her handkerchief. Howard verbally creeps up on her: “You sent Hammond a letter,” Indignant, she snips, “I never did anything of the kind.” Twist, twist and a few pulls on the flower in her buttonhole as she boldly lies. Her eyes say it all. They widen as Howard pulls an envelope containing a copy of a letter from  his pocket, stating, “Perhaps you’ve forgotten what’s in the letter.” Leslie will have plenty of reasons to fidget—and so will Howard, as he decides to save her skin and they pursue a plot to buy the original letter from the dead man’s Eurasian widow. As the night air thickens, so does the plot.

The cinematography highlights the recurring motifs of moon, scudding clouds and discordant wind chimes. Venetian blinds and bold striped fabrics create cage-like claustrophobia, and Max Steiner’s haunting score adds to the tension. Based on a 1929 short story by Somerset Maugham, the polite discord between the Malayans and the British plays a significant role in the tragic resolution. The movie ends where it began in the still, mysterious moonlight.

FAVORITE SCENE: The sensory overloaded scene in the opium den when Leslie, wearing a lacy shawl, approaches the female keeper of the letter who makes a grand entrance through a jangling bead curtain. Snow White meets the Evil Queen.

TRIVIA: Watch for the most visually stunning use of pearls in the history of cinema.

Set in Tbilisi, Georgia, after the breakup of the Soviet Union, this tale explores the relationship between 90-year-old Eka (Esther Gorintin), her 40-something daughter, Marina (Nino Khomasuride), and her 20-something granddaughter, Ada (Dinara Drukarova). The story begins with the arrival of a letter from Otar who is Eka’s son, Marina’s brother and Ada’s uncle. A physician, he left chaotic Georgia to find work in Paris.  Finding work without a visa is troublesome, but Otar manages to send money home to his family. The women cherish his letters—not minding their brevity. “Sorry for writing so late. I haven’t had a moment to myself.” Otar becomes slightly mythic. Eka looks at blurry photos of him, convinced if he were home, he could fix the inconveniences in post-Soviet Georgia. Fascination with France permeates their old-world, shabby chic apartment, creating a fantasy world that contrasts with real life. Bookcases hold leather-bound French novels; Ada reads Proust to her grandmother, and they speak French at home. Eka is bent with arthritis, but she expresses Parisian flair with her stylish clothes, flashy earrings and painted nails. Daughter Marina, whose soldier husband perished in Afghanistan, is less captivated with make-believe and expresses the cynical, snappish resignation of a generation caught in the post-Soviet miasma. Ada just wants to grow up and escape—perhaps to France. Eka takes a brief respite in the countryside, and while she is away Marina and Ada receive word that Otar died working on a construction site. They decide to keep the truth from Eka. But they find that deception takes great energy. In forged letters penned by Ada, Otar seems to be finding his way. “I have a new job in a Russian restaurant. Don’t laugh, cooking and medicine have a lot in common. Forgive me if I don’t call but I work very late.” Eka observes that her son has become quite a writer. Gulp. It’s clear that the deception is an act of love. In her debut feature French director, Julie Berticcelli encourages these fine actresses to convey the tension and tenderness that exists between their characters. The acting, writing and directing keep the story from slipping into melodrama. The letter writing will lead to a journey and an unexpected ending.

FAVORITE SCENE: The first scene takes place in a bakery. The three women sit at a small table sharing a piece of cake selected by Eka. No words are spoken, but  body language and facial expressions reveal their relationships. Berticcelli says the scene was the last one shot. It shows how well the actresses understood their characters.

TRIVIA: Ester Gorintin who plays Eka began acting when she was 83; Since Otar Left won The 2003 Critics Week Grand Prize at Cannes.