I’d like to tell you a little about the interior of Mt. Lebanon’s Hitchhiker Brewing Co.

Because you might have a hard time getting in there to see it for yourself — at least right away.

The much-anticipated brewpub, located at 190 Castle Shannon Boulevard, is going to have a soft opening on Saturday, May 10, starting at noon.

It’s sure to be a crowded scene, judging by the great numbers of people who’ve been watching the progress at that address, talking and asking about it, noting when signs go up and lights are on, and often knocking on or even opening the front door.

Some of those people have been rewarded with tastes of the beer or even, one recent Saturday, with a chance to take home a growler, or glass jug, of the draft beer.

But this Saturday, it gets real.

The interior has been done for a while. It’s prettily spare, with a long main bar topped with joists reclaimed from an 1800s farmhouse in Belle Vernon and sided with the old roof of a barn owned by the farmer that’s picking up the brewery’s spent grain and feeding it to his dairy cows.

The decor includes antique-looking signs and sacks of brewing malt hanging from pulleys over the smaller bar that lines the other walls, and light (and peering, curious eyes) can stream in the big front window looking out on the intersection of Castle Shannon Boulevard and Shady Drive. 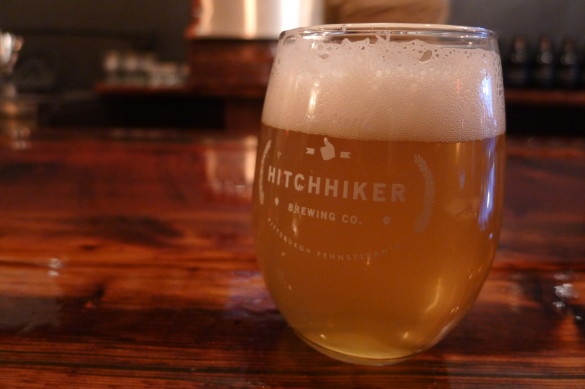 I sat in there one night with owner Gary Olden and the head brewer he hired in mid-March to help him, Andy Kwiatkowski, as they talked and sampled some of their brews, and thoroughly enjoyed, along with the beer, the parade of people that peeked their heads in — and, in one woman’s case, walked in with her dog — to ask if the place is open.

Mr. Olden shocked one man by asking him, “Would you like to try a beer?” And poured him a kolsch. The man was all smiles.

One couple asked, “Are you going to serve food?”

Mr. Olden patiently told them about a little about the small plates that his wife, Serena (they live on Colonial Drive), was planning: Gourmet hot dogs, a plate of local cheeses and meats, hummus and pita, soft pretzels, house-spiced nuts, plus some specials for various occasions.

But the main attraction is his and Mr. Kwiatkowski’s beer.

To start, the place will be serving pints as well as growlers and half growlers of a half-dozen names, all given names and labels designed by Mr. Olden himself to reflect the place’s name and “Pick up a Hitchhiker” theme: Tumbleweed Oatmeal Brown Ale, Roadie IPA, Centerline Black IPA, Soles Farmhouse Saison, Rucksack Porter and Cobblestone Kolsch. Later, they’ll put on their Sunveld Witte and other seasonals that the two are brewing on a three-barrel electric system in the basement.

“I couldn’t ask for a better situation,” says Mr. Kwiatkowski, who’s been an award-winning homebrewer and local craft-beer advocate and personality for the past four years. He’s planning to keep the brewpub very involved in the bigger craft-beer scene.

What’s on tap will be listed on the chalkboard at the front of the room.

They’ll also be pouring some local wines and ciders, as well as house-made ginger ale and root beer. 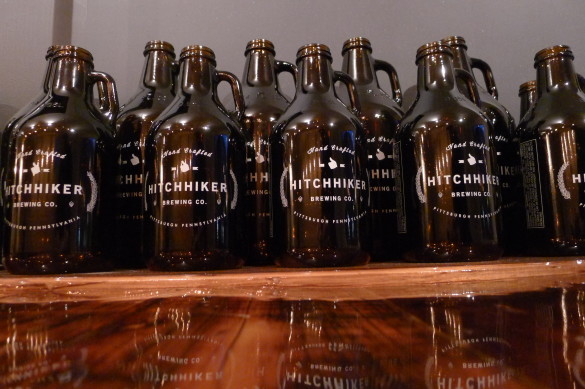 Occupancy is limited to 56 people inside, but they have outdoor seating for another 50 or so on a deck out back and on the side and hope to have some on the sidewalk out front, too.

Around his day job managing an industrial manufacturer’s e-commerce group, Mr. Olden has been working really hard on the project, including that night when he had had to move boxes of growlers in which customers can take away 64 and 32 ounces of draft. It felt good to him to sit down, and it will feel good to him to open. “I was like, ‘Look at all the progress we’ve made.’ “

Soon, the curious and thirsty public can have a good look and a taste, too.

Hitchhiker Brewing Co. is at 190 Castle Shannon Boulevard, just a few blocks off the Washington Road business district. Its hours are 3 to 11 p.m. Wednesday and Thursday and noon to 11 p.m. Friday through Sunday. (Closed Monday and Tuesday).

The newly launched website is www.hitchhikerbrewing.com and the phone is 412-343-1950.