An interesting new vendor has been tossed into the mix at the Wednesday evening Mt. Lebanon Lions Farmers Market at Mt. Lebanon United Lutheran Church at 975 Washington Road.

Jon Beck, whose business card identifies himself as a “food artist,” last week started selling salads at the 4-to-7 p.m. market, either to eat on site or take home.

Made with local produce and proteins that he gets from farmer friends and with his dressing (on his first Wednesday he was pouring Southwest Pennsylvania Sour Cherry Vinaigrette), the salads cost $5. You can add natural/free-range grilled chicken for $3 and/or mulled almonds for $1. He plans to do all kinds of composed vegetable salads and fruit salads. 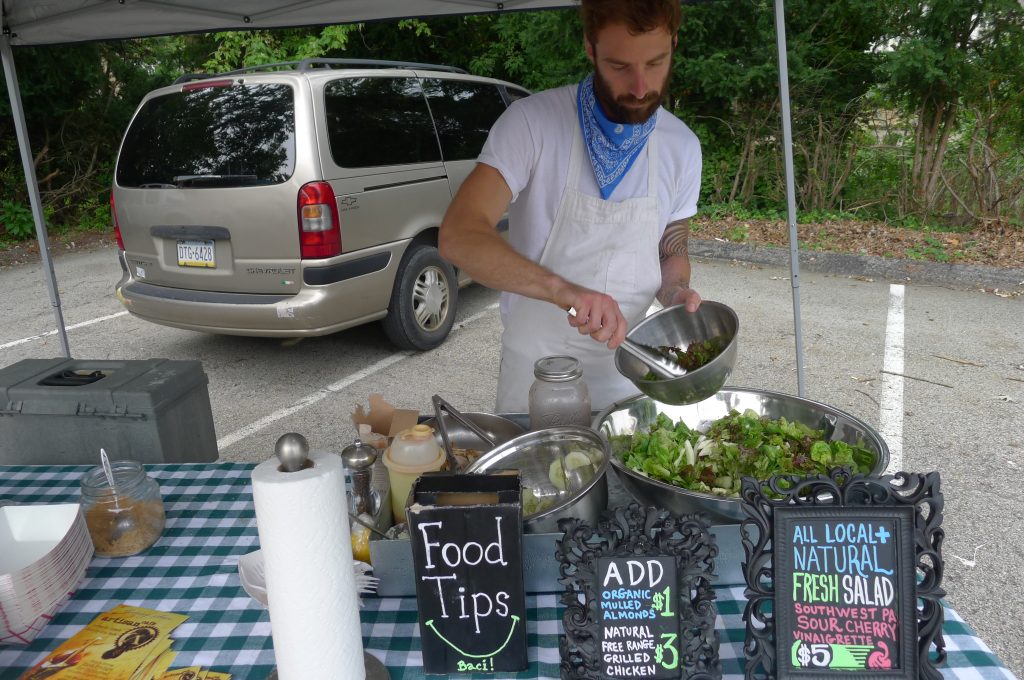 He’s also selling at the Thursday farmers market in Green Tree, where he’s served heartier fare such as slow-roasted porcetta sandwiches. He describes his style as riffing rustically on street food, but in a healthful way.

“I cook everything from scratch,” he says. “Everything is all-natural, local and seasonal when possible.”

You might see Mr. Beck and some of his handiwork if you go to ULTRAParty Uptown on Aug. 3; he’ll be roasting a pig there — something he also hopes to do later this season for an event at the Lions market.

He’s honed his “inborn” cooking skills by making food to serve during the first-Friday “Unblurred” event in Garfield at the Artisan Tattoo Gallery at 5001 Penn Ave. The first floor there, Mr. Beck says, is going to become the Artisan Cafe, where patrons can eat his food at communal tables and peruse art on the walls. He’ll be joined, as he is for Unblurred, by fellow Mt. Lebanon Lions market vendor Zeke’s Coffee Pittsburgh. They’ll be doing their next food and coffee tasting there on Friday, Aug. 2, when the coffee will be free, but the food will cost a few bucks.

He’s handing out cards at the market that talk more about his background, his philosophy and his plans. The 32-year-old Pittsburgh native says he’s mostly Italian and is inspired by his two Italian grandmothers’ Sunday meals.

He lives in Green Tree, which is also where he spent much of his boyhood. He graduated from Chartiers Valley High School before going to LaRoche College, where he earned a bachelor’s degree in graphic design. He worked for about a decade driving and doing graphic design for a local food-service company before being laid off.

He found Artisan this past fall when he went there to have a sleeve inked onto his left arm. The five-hour tattooing sessions necessitated sustenance, but he thought it would be rude, he explains, to just bring food for himself. So he brought enough for his tattoo artist and everyone else at the shop, and, “They loved it.”

And the rest is history … that’s still being inked

Local sour cherries are in season for way too short of time, but Jon Beck says you can substitute any cherry or berry that is in season. He says this dressing is “great on salads, grilled meats and fish,” and notes:  “Measurements are just highly educated guesstimates. I eye everything up.”
1 quart light-red sour cherries (from your local Southwestern Pennsylvania farmer, of course)
1 cup filtered water
1 cup local raw honey
1 cup extra-virgin olive oil
1 cup Alessi brand white balsamic vinegar
Juice of 3 lemons
Sea salt and freshly ground black pepper
Pit cherries and remove stems. Combine in sauce pan with 1 cup filtered water and honey.  Bring to boil, then turn down to simmer until mixture thickens down into 1/2 of original volume, stirring well and often.
Combine cherry sauce with olive oil, vinegar, lemon juice, a large pinch of sea salt and pepper to taste in a large blender or food processor; mix on high for 30 seconds. Taste and dilute with filtered water to taste, adjusting salt to taste.
Pour into your favorite glass vessel — you’ll want to be able to enjoy its beauty on your table. Stir well or shake in dressing container before pouring.
Makes 20 to 30 servings, depending on how much you like to use.
— Jon Beck
Read more of Bob’s blog at the Pittsburgh Post-Gazette: pgplate.com/forks.