In September, I received a request from Mt. Lebanon resident Phil Cynar, communications director for the Allegheny Conference.  A film crew from Arte-TV in Strasbourg, France, in the Alsace region near Germany,would be in town  filming a web documentary . Would I show producer Vladimir Vasak around Mt. Lebanon?

Arte-TV, as I later learned,  is a channel similar to A & E that broadcasts in French with German subtitles or visa versa. Vasak, a media star in his home country, chose Pittsburgh for a study of an American city  in 2012 on the eve of a presidential election.  With this project, titled Pittsburgh, from Black and White to Colour, Vasak hoped to follow in the  footsteps of the great American photo-journalist W.E. Smith (http://en.wikipedia.org/wiki/W._Eugene_Smith), who documented Pittsburgh for three years during the city’s first Renaissance in the 1950s.

Cynar  had many influential people  lined up —Allegheny Conference Executive Director Bill Flannigan and former ambassador and journalist  Dan Simpson, for starters—to promote the city.  So why bring Vasak to Mt. Lebanon?  I suspect it is because Phil, a former member of Mt. Lebanon’s  community relations board,  and his partner, Dan, live here in a charming bungalow and love our thriving first suburb, a place  that contributes considerably to the region’s cachet.  And from both of our perspectives, the whole point of the effort was to get  French and German viewers to see our regions’s remarkable  transformation and consider it as a business, cultural and recreational destination.

Of course, I agreed to take Vasak on a tour—it’s my job to “show off” of Mt. Lebanon.  Unfortunately,  I had to meet him and his sound man on a Saturday afternoon and they were nearly two hours late—ugh. But once I met Vasak, it was clear I was in for a memorable experience. For two hours,  I drove the pair through Mt. Lebanon’s  neighborhoods enthusing about our history, our architecture, our local government and our political issues, but curiously, they  didn’t take any footage. Turns out what Vasak really wanted was to see a “typical Pittsburgh home.”  Mine. 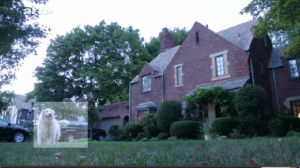 I protested that, like most Mt. Lebanon residents,  mine is not a “typical” Pittsburgh home—it is a  pretty good sized Tudor revival on a lot and a half.  But they would not be dissuaded, so  we pulled into my driveway and  ambushed my husband, Hal,  who  was doing yard work—what the documentary later described as” taking pride in our immaculately tended lawn”—an exaggeration to be sure.  I showed Vasak every inch of the house including the bedrooms, baths and closets. He decided he wanted to return in  a day or two  to do some filming but puzzled over the story—what was the angle?  I wavered for a minute, thinking about the pains of entertaining on a week night, and then pitched him an idea:  How about  four generations of my family, all of whom  (in typical Pittsburgh fashion) live nearby,  enjoying a meal together?  In fact, how about if we grilled out—Americans have a love affair with their outdoor grills. Yep, Vasak liked that idea. 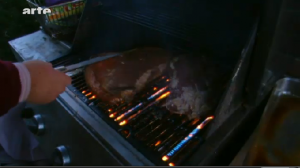 My mother, Ruthe Fleming, who moved three years ago  to Providence Point from her home of 50 years on Woodhaven Drive , was game.  My daughter Elizabeth Windsor, a lawyer, and her husband, Ben, a self-employed businessman, who live just a quick walk away, were less enthusiastic about bringing William, 5, and Andrew, 3,  for dinner on a busy Wednesday evening, but they agreed.  So everything was set except the menu.  Vasak didn’t want to film a fancy dinner in the dining room, so we planned a casual meal in our small dining area off the kitchen/family room.  For the “barbecue,” as the documentary calls it, we decided on grilled, marinated flank steak (easy), green beans with mushrooms, corn on the cob ( because our Dutch exchange student once told us no one in Europe  eats corn on the cob; it’s for the pigs),  oven- baked parmesan potatoes, a tossed green salad and apple pie (bought) with ice cream.  Hors d’oeurves were mixed nuts and cheese and crackers.  And we had soda, milk  and wine, plenty of wine. 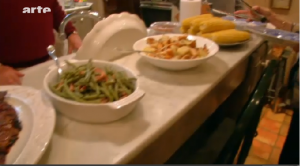 As  Hal and Ben prepared the grill—men’s work, they told the camera—and I made the salad,  my mother perused W. Eugene Smith’s photographs of Pittsburgh. “Were you introduced to Pittsburgh by this book?” she asked Vasak, not knowing her words ultimately would introduce  the series of web documentaries.  As she looked at familiar black and white photos of our  prosperous but filthy pre-Renaissance I Steel City, she recalled how in the 1940s  she covered her  mouth with a hanky to keep from inhaling smog en route from the trolley to the Koppers Building, where soot accumulated on her desktop, blackening her sleeves. It was sad to see the death of the steel industry, she admitted, but she pointed to clean air as a wonderful  benefit of Pittsburgh’s rebirth as an eds and meds culture. 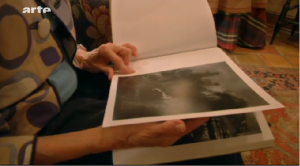 Finally, it was time to put the meat on.   Ever the ham, Hal couldn’t resist delivering a treatise on the art of grilling, including a quasi commercial for Pam spray,  to his “spellbound” audience.  And the flank steak did turn out well, despite my store-bought marinade!  The family ate while Vasak filmed; then he turned off his camera and he and his sound man, Sebastian, ate, chatting congenially. Both were interested in everyone’s views on the upcoming election.  Not surprisingly, as Europeans, they were Obama fans. More important, perhaps, they had become Pittsburgh fans  They promised to come visit when they returned to Pittsburgh and then bid us au revoir. 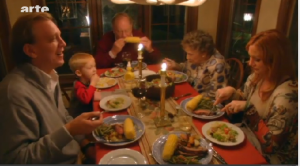 I never hear a word from them —not even a thank you—until yesterday, when I received a very nice email and a link to an English version of the  web documentary they had created.  Composed of five parts, the documentary, is a beautiful tribute to Pittsburgh’s past, present and future.  Within each of the major sections about Pittsburgh—image, heroes, economy, democracy and lifestyle—there are three or four shorter segments on the topic.   The story of our family barbecue—which I honestly believed would end up on the cutting room floor—appears in the final “lifestyle” section and is titled “Barbecue at Susan’s.” Here’s the link to the entire web series:  http://php4.arte.tv/box/usa2012/en/

Our family has had fun watching the video, but  even more fun was having a chance to entertain Vaasak and his crew—a great reminder that when we reach out to people from other countries, we may find more commonality than differences. Please  watch the video—all of it.  And if you make it to “Barbecue at Susan’s,” remember, the camera adds 10 pounds!