George Carlin once made a joke that went something like “I finally got my (stuff) together but then I had no place to put it.”

That may once have been the case for Mt Lebanon Municipality, but today, the place that houses information about all our “stuff”—roads and trees, sewer pipes and houses, walking trails, stop signs, schools and sidewalks, just to name some—can be found at the municipal building. There, on the second floor, Michael Meseck, Mt. Lebanon’s Geographic Information Systems (GIS) coordinator, maintains an exhaustive database that houses just about every piece of information that has been gleaned about Mt. Lebanon since it was gaveled into existence in 1912. 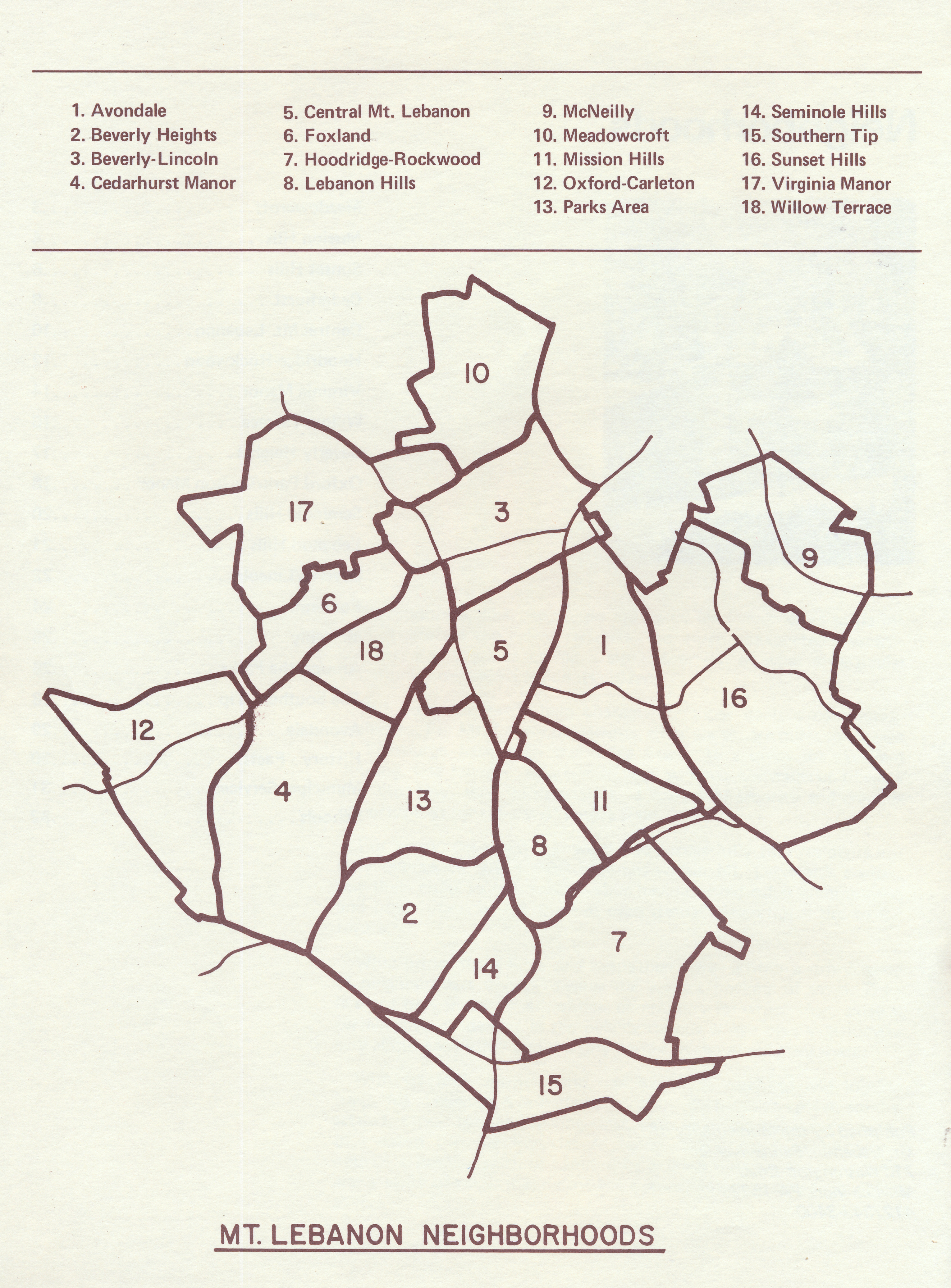 Mt. Lebanon has had a GIS database since 1996.  Inputting all of the information took almost two years and involved digitizing more than 1,700 paper maps of street trees, fire hydrants, traffic signals, storm and sanitary sewer lines and much more; hiring an aerial photography company and then, once the whole town was photographed, sending crews out to verify that everything that was in the system was correctly labeled.

All of that information was sifted into “layers” that can be combined to deliver exponential amounts of information.

“Each GIS layer has data associated with it,” says Meseck, who has been Mt. Lebanon’s GIS Coordinator since 2002. The layers can be overlaid for spatial analysis, and the underlying data can be queried to extract useful information for a particular project or study.

There are more than 45 layers of information in the system, including parcel and lot dimensions, building footprint, topography, ward and zoning districts, roads, street signs, street names, bikeways, streams and creeks, and sewers, parks and wooded areas.

One recent layer, a map of Mt. Lebanon’s neighborhoods, came about in conjunction with the developing of a draft ordinance that, if adopted, will permit and regulate neighborhood signs on traffic islands, if residents of the neighborhood should want to identify their subdivisions by name, as the Mission Hills and Cedarhurst Manor signs do. 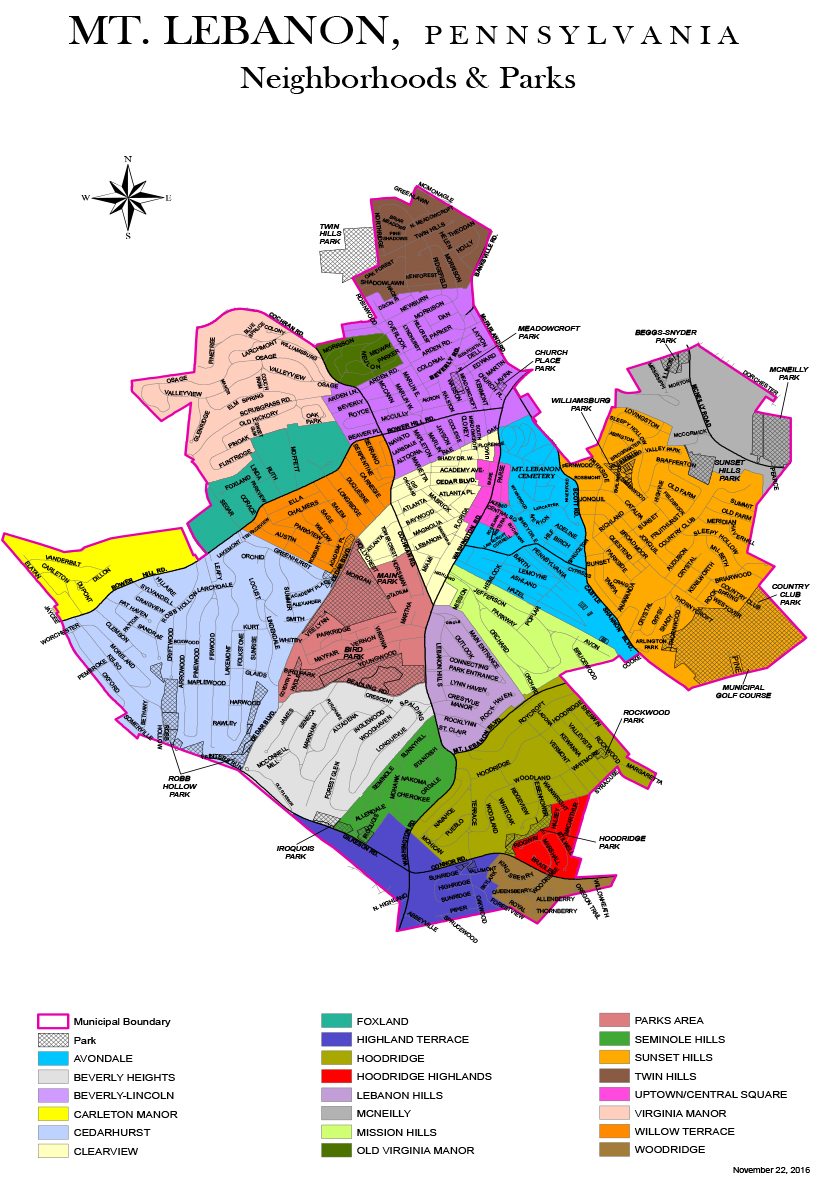 Working from a 1970s book published by the public information office on Mt. Lebanon neighborhoods (pictured above), Meseck took the boundaries of 18 named but loosely designated areas—Willow Terrace, Beverly Heights, Seminole Hills, etc.—and  matched the houses in each with a layer of master plans of lots, showing which housing plans each of the houses belonged to.  He then incorporated physical boundaries such as streets, and after some fine tuning came up with a colorful map that shows the names and defines the borders of all of Mt. Lebanon’s neighborhoods (pictured right).

Another good example of how GIS works is the new parks trails layer that has helped the parks advisory boards obtain a snapshot of the health of each of Mt. Lebanon’s parks and institute a schedule of volunteer maintenance and invasive plant removal. Civil & Environmental Consulting collected the raw field data for the project. Consultants, Inc., which Meseck then reviewed and edited it for quality and accuracy. “In some cases, it looked like the trails went out of the park and onto private property, so I had to make sure the data was accurate,” he says. 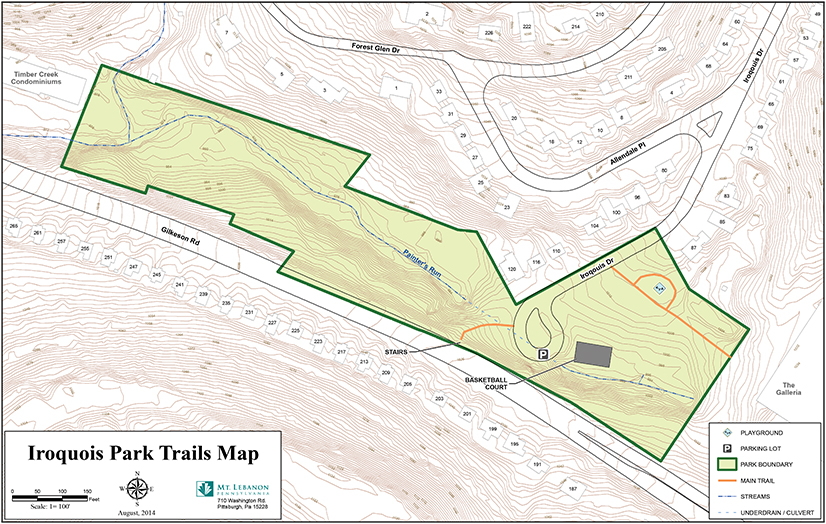 Another recent project was the creation of a layer that shows the 4,200 Mt. Lebanon properties in Mt. Lebanon’s National Register Historic District. Mt. received the prestigious honorary designation in 2014. Board members and other volunteers worked with Skelly & Loy consultants to define the boundaries of the district, verify the attributes of the contributing properties and write the nomination.

Meseck has more than enough to keep him busy, as every municipal department uses his services. The police ask him to map deer-vehicle collisions and other deer-related incidents; he integrates GIS data with pre-planning software for the fire department; he creates maps showing utility easements and building setbacks for residents who are applying for zoning permits. In many cases, original property surveys may have some slight errors. Permits that require a new survey correct that misinformation. With more accurate surveys, Meseck can put utility easements and building setbacks into GIS layers.

When he is not working on projects for other departments, Meseck updates the information that is already in the system. GIS layers can be static—the municipal boundaries are not likely to change overnight, for instance—or active. The active layers, such as street trees, need to be checked in order to remain current. The trails layer is an active one; already park users are reporting changes, such as a new fence in one of the parks that changes access to parking.

Meseck also creates maps for the public. Residents can request a map of a specific area with up to 16 layers of information, including sidewalks, storm sewers, building footprints, contour lines and more.

Fill out a request form and submit it to the GIS office, or drop off the completed form at the municipal building’s customer service center. Map sizes range from smaller than 11X17 inches ($15) to larger than 17X22 inches ($30).