In the fall of 2011, my wife and I spent two weeks traveling through Canada, by rail, for my 40th birthday. We started in Toronto, visited Ottawa, Montreal and ended the trip in Halifax, Nova Scotia. What to do in Halifax? One obvious choice is to indulge in the fresh seafood of the Maritimes. But if you are a hockey fan from Pittsburgh, the other is to visit Sidney Crosby’s hometown of Cole Harbor as well as visit the exhibit dedicated to him in the Nova Scotia Sports Hall of Fame. 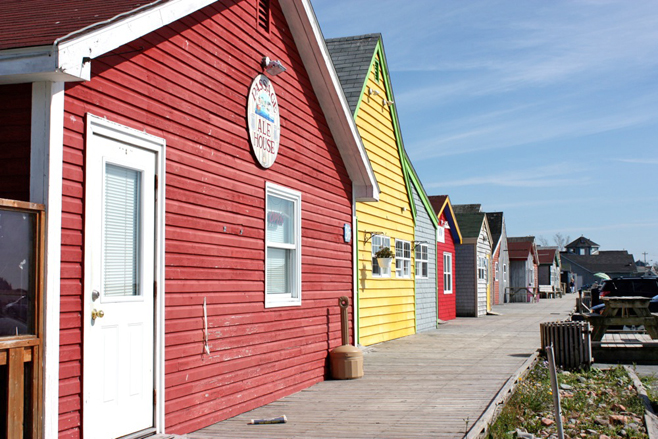 Our last day consisted of the aforementioned plus a visit to Wharf Wraps in the colorful town of Eastern Passage, a 30 minute drive from downtown. On the train ride from Montreal to Halifax, we met a couple who recommended this restaurant and claimed they have the best fish and chips in all of the Canadian Maritimes. This, we had to check out.

I had purposely waited until we got to Halifax to try any fried fish. Given the English heritage and the fresh haddock from the Nova Scotia fisheries, I suspected that the fish and chips would be good. Seeing the gigantic servings of battered and fried haddock at the pubs in Ottawa only confirmed that suspicion. 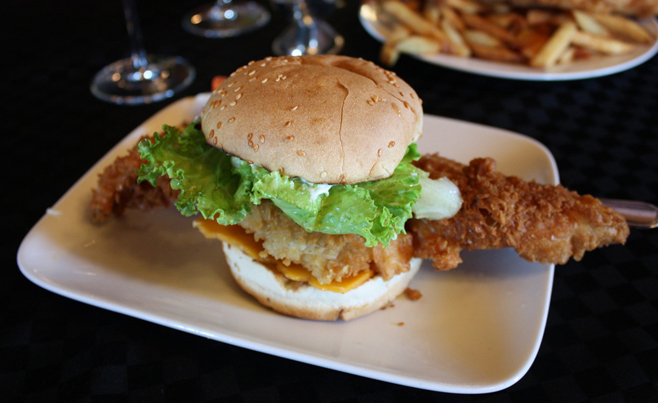 The fried fish was indeed everything it was touted to be. And it was huge! As you can see, the bun looks comical against the sheer size of the haddock filet. The breading was crisp, the fish moist and flakey without being greasy. It was well worth the trip and the wait. Having enjoyed fish and chips in the coastal towns of the UK and British Columbia, this was the best I had ever had. 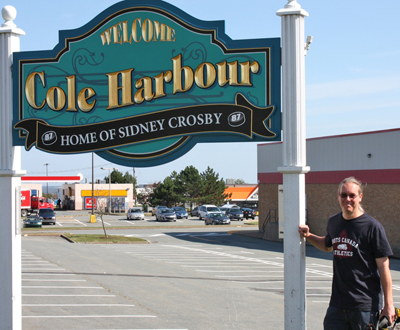 Onward we ventured to Cole Harbor. You’ll know you’ve reached Cole Harbor when you see the sign “Welcome to Cole Harbor, Home of Sidney Crosby” with the number 87. Of course we had to play tourist and get our picture taken in front of the sign. 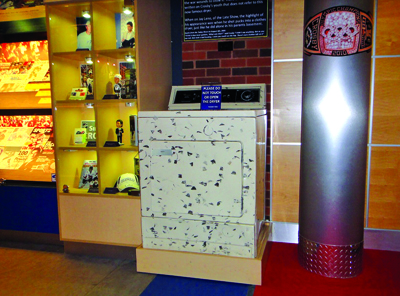 Back in Halifax, we ended our day at the Nova Scotia Sports Hall of Fame. It’s a small yet nice exhibit highlighting a variety of athletes many of whom were Olympic medal winners. On the one wall there is an exhibit dedicated to Crosby, highlighting his career from playing in the youth leagues to winning the Cup with Pittsburgh and receiving a gold medal in the 2010 Olympics. Included in the exhibit is the famous clothes dryer from his parent’s basement that took a beating when he would practice and miss the net, hitting the dryer. Based on the marks and dents, it is pretty evident that he spent a lot of time practicing.

A good day all and all, finished it off with dinner with good friends who live in Nova Scotia and then flew home the next day. YHZ->YYZ->PIT. It’s an easy set of flights to a place that really does seem a world away.