It was just a tiny cat that came in for a routine physical back in 2009, all of five pounds. “It was the nicest cat,” says veterinarian and Mt. Lebanon native Laura Catena. But somehow, right in the middle of the exam, the cat lunged at her, grabbed on and bit her left hand, as the owner stood there horrified and Catena fumbled to free herself: “There’s a cat dangling from my hand,” she recalls.

But that wasn’t the worst part. She knew cat bites have a tendency to get nasty infections, so she went to the hospital, received some antibiotics and went home thinking everything was going to be OK. When she woke up the next morning, just a few hours later, her entire hand was swollen and there was a red line going all the way up her arm to her neck, a sure sign of a blood infection.

Back to the hospital, where she had to have extensive surgery, and doctors weren’t sure she would regain the use of her left thumb—a problem since veterinarians perform surgery themselves. After a six-day hospital stay, a trip home with a PICC line inserted in her vein to continuously give antibiotics, and three months of physical therapy, she got lucky and is able to use her hand again. 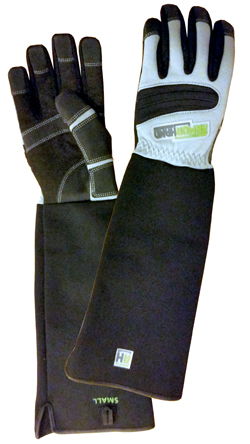 Yes, Catena had gloves she was supposed to be wearing at the Robinson office where she worked. But “nobody wears them,” she says. They’re bulky and thick, like welder’s gloves. They don’t come in a variety of sizes and the animals can slip through them anyway, and you’re left chasing the pet around the exam room.

So while she was on maternity leave, Catena decided to invent her own gloves. Working with a patent attorney and distributors from medical equipment company Henry Schein, located in Columbus, Ohio (near Ohio State’s famous veterinary school and Catena’s alma mater), Catena described what she wanted and tried on many prototypes before perfecting a machine-washable, non-disposable exam glove that is protective but allows vets to properly feel for tumors and bumps and even draw blood while protecting themselves from any type of animal.

Made from a mix of Kevlar, a fabric used in police ballistic vests, and Cordura, a material used in luggage and other tough applications, the gloves come in several sizes to get the best fit. The gloves, which sell for $105 a pair, are being marketed first to veterinary practices and hospitals but Catena says she may look at putting them in retail locations so pet owners can more easily handle their animals at home. (For example, to get the cat in the carrier to take to the vet in the first place.)

Catena now works at the Wexford Veterinary Hospital and lives in the North Hills, with her husband, Greg Novotny, and their two sons.