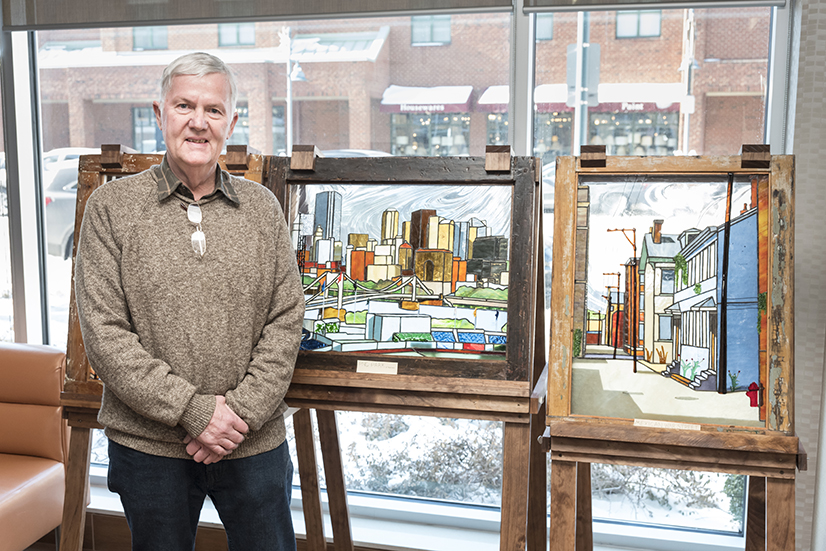 When you walk into the SpringHill Suites on Washington Road, you’ll see a collection of stained glass windows that showcase scenic parts of Pittsburgh. Ernie Thomas, the Magnolia Place resident responsible for the art, has spent years honing his skill at making marvelous displays derived from pictures of some of Pittsburgh’s most well-known buildings and neighborhoods.

“It takes an awful lot of time. It’s very time consuming,” Thomas says. “Making sure you have the glass colors right is challenging. You have to match the tone of the building. I try to get glass that isn’t too much of primary colors.”

Thomas, 67, is from Wales, where he worked as a geologist for a coal company. His wife, Kathy, is American and they decided to move to western Pennsylvania in 1978. He took a job with Consol Energy and they moved to Mt. Lebanon in 1987. Ernie and his wife raised three boys together. 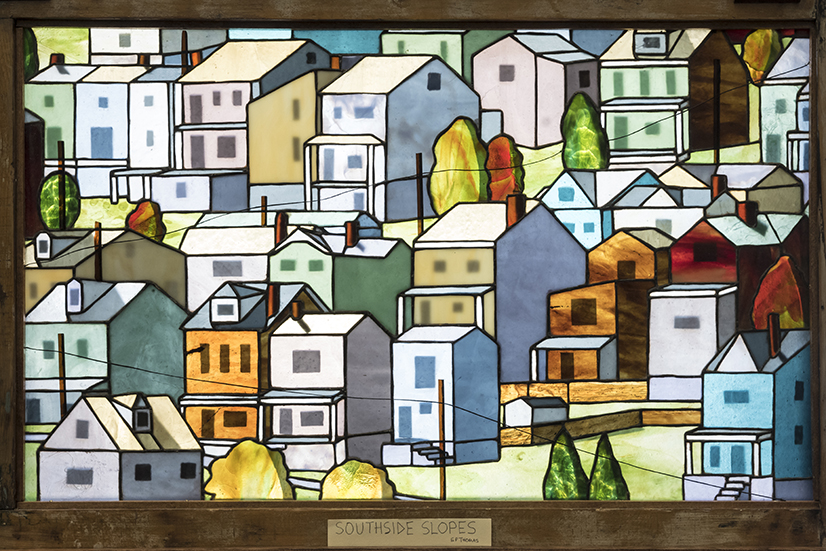 Thomas’ interest in stained glass began 15 years ago at the Community College of Allegheny County in Bethel Park, where he took a class. Eventually he hooked up with a business called The Glass Place, in Lawrence, Pa. Owner Ruth Mahoney taught Thomas a lot of the skills needed to do the artwork. “I did all kinds of different projects,” Thomas says. “I had a window at my house that was an old transom window. And I was thinking of what to put in there, and it just occurred to me that the Point in Pittsburgh would fit the space perfectly. It was my first attempt at doing something like this. It was OK. I thought I could improve on it.”

Mahoney enjoys when Thomas comes into the shop. He’s taken a lot of classes since she first met him. He’s a great student who always tackles something that is off the wall for everyone else, Mahoney says.

“He’ll say he has an idea and goes from there. His ideas are not what the normal person would do,” says Mahoney. “But they’re things he is interested in. That’s what we like about him. He’s able to visualize what he wants to do. He might not know how to do it, but he’ll figure it out.”

Thomas takes some of his concepts from Ron Donoughe’s 90 Pittsburgh Neighborhoods book, which showcases photos from throughout the greater Pittsburgh area. He first makes a drawing from the photo, and then color coordinates a scheme on the drawing to guide the glass-making aspect of the artwork. 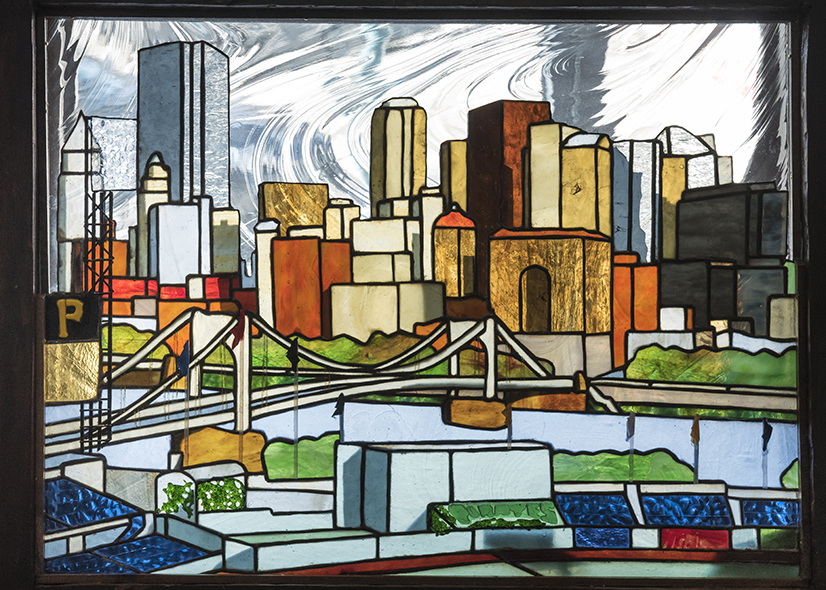 “It took me a while to figure out how to do these windows,” he says. “I’ve had some failures at it. You’re always kind of experimenting as you’re going along.”

When he finished his set of stained glasses, he wanted to keep them together. Thomas contacted the Mt. Lebanon Library at first, but they didn’t have space for it. Neither did the municipal building. But after being referred to the manager of SpringHill Suites, he found a place to feature them. John Hupp, sales manager of the hotel, sees it as good advertising. People walk in to look at the artwork. “I think they’re pretty awesome. I’ve never seen anything like it,” says Hupp. “It’s a lot of detail. It’s nice for people to come in and see this.”

The hotel stay is temporary. Thomas hopes to find a permanent place for panels.

Thomas doesn’t do all his work in one sitting; it takes him six to eight weeks to complete a project. And he does only one stained glass piece at a time. Then he takes a break before starting another project. “He has to come up for air every now and then so we have time together as well as having time on his craft,” says Kathy. “

Though it’s an enjoyable hobby, it can also be expensive. But since it takes a while to finish, the costs are spread out. But one thing is imperative—you have to have proper training.

“As far as doing this kind of work, the most important thing is learning to do it properly.” Thomas says. “So taking classes is important because you can get in bad habits if you don’t.”

Kathy has seen Ernie’s interest grow commensurately with his skill level. “The more he knows about it, the more he feels challenged to take it to the next step,” she says. “I’m proud of him. He does such a nice job. I see him doing this for years to come. You can do this into old age as long as you can see.”