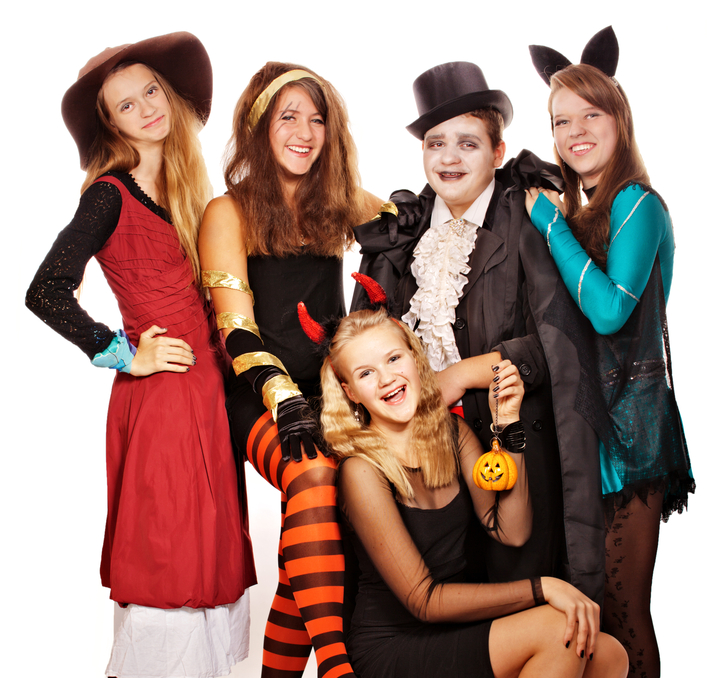 My son’s middle school friend recently proclaimed that he was too old to go trick-or-treating. Soon after I heard about this, I saw a post on a South Hills Moms Facebook group about an 11-year-old who thinks he’s too old to trick-or-treat. He wanted his mom to poll the other moms. The choices were:

I responded “No,” but would also have voted for the second choice because candy is my Kryptonite.

My kids agree. They don’t consider themselves too old, and will be 12 and 15 in a few months. In fact, they scoffed at the idea. My son said, “[These kids] just think they’re too cool to go.” My daughter, who’s in high school, said they probably think no one else in their grade is doing it, which isn’t the case. It’s not about being cool, she says, but about having a good time. She goes trick-or-treating because she likes the atmosphere, having fun with her friends, and of course, the free candy.

While candy has been a mainstay, our participation in the holiday has changed as the kids get older. We’ve gone from parent-driven creative Halloween costumes (when I was pregnant with my son, I wore an oven cut out around my large belly, my husband wore a chef’s hat, and my daughter had a pie necklace with a headband that had the letters Q-T. You figure it out…) to the kids dressing as their favorite fictional characters to this year’s costumes, which are being put together with as little effort as possible. My son is even recycling an old one. My daughter, at least, is making some of hers.

I’ve always loved how Halloween fosters creativity, and not just with costumes.

We used to take the whole family to a fall festival at a farm, where we picked pumpkins out from the patch. The kids would come up with jack-o-lantern designs and we’d save and roast the pumpkin seeds after my husband did most of the carving. This year, I got our pumpkin from Giant Eagle and glow-in-the-dark paint to decorate it. What’s next? A 3-D printed pumpkin in the design we want?

Gone are the days of wonder as we escorted our little ones around the neighborhood, seeing their awe at everyone’s disguises and taking pleasure in the compliments received at their own. I admit I used to be taken aback when I saw tall beggars at my door, especially when they barely had a costume. But now I say, good for them. These days, kids are growing up way too quickly. Let them have fun while they can. Just put a little effort into the costumes, and save some candy for me!

P.S. Figure out that costume yet? I had a bun in the oven, my husband was the chef, and my daughter was a cutie pie.