My friend Miriam Rubin is coming to the Mt. Lebanon Uptown Farmers Market this Saturday, July 13, and you might like to come, too, and meet her.

She’s not coming to shop. Or not just to shop.

She’ll be making and serving tastes of Tomato and Watermelon Salad with Feta and Oregano from her new book, “Tomatoes.” She’ll make the dish with Royal Mountie tomatoes from market vendor Zrimm’s Farm.

Miriam, who writes the Miriam’s Garden column and other good things for the Post-Gazette’s food section, earlier this year published her latest cookbook, “Tomatoes,” which is part of the “Savor the South” cookbook series by the University of North Carolina Press. 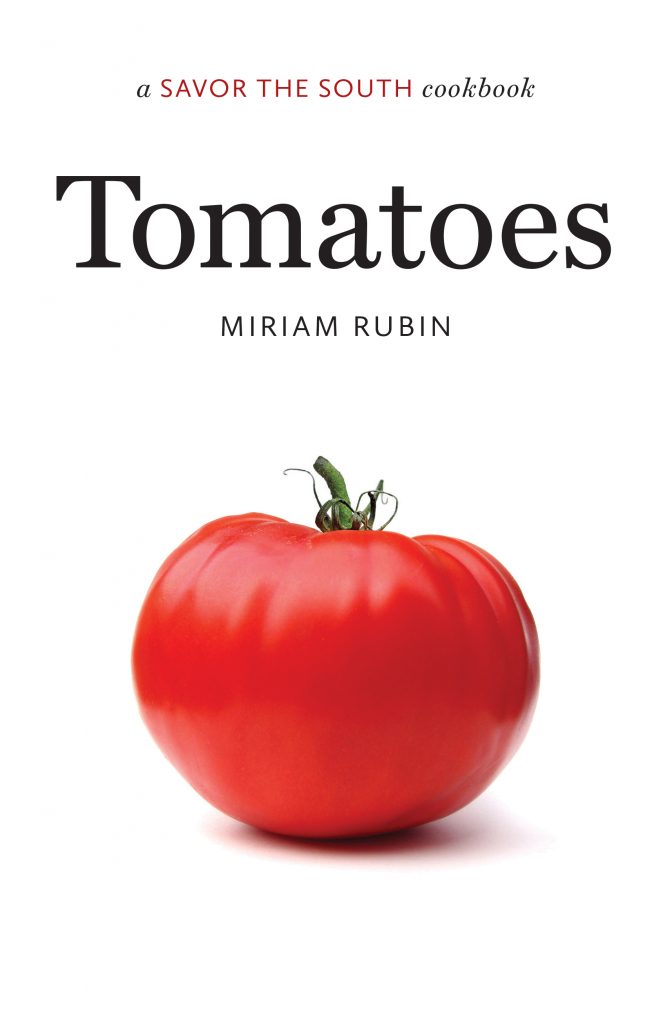 She’ll be bringing some copies from the Greene County log cabin where she and her artist husband, David Lesako, live and garden and write and paint, and she will be happy to sign one and sell one to you.

Her appearance is one of the special events arranged by Farm to Table Pittsburgh, which is partnering with this season’s market, which happens in the heart of the Washington Road business district from 9 a.m. to noon Saturdays through Oct. 20.

Miriam is to be there from 10 a.m. to noon Saturday, one of several public appearances she’s doing in the area. One is a Slow Food Pittsburgh Sunday supper at Legume Bistro in Oakland on Aug. 11, when local tomatoes will be bountiful.

Here’s a taste of the recipes inside the book.

“These are gorgeous nestled alongside a grilled or baked fish or a juicy steak or as the star of a vegetable plate,” writes Miriam Rubin. “Medium-sized round tomatoes or large Romas work best, but cut Romas lengthwise in half instead of crosswise. Good-quality supermarket tomatoes work nicely because baking intensifies their flavor. Don’t be tempted to use store-bought dry bread crumbs here. Making fresh ones is so simple: Tear the bread into rough 2-inch pieces and buzz it in the food processor.”

Preheat the oven to 425 degrees.

Arrange the tomatoes cut-side up in a baking dish just large enough to hold them. Mix 1⁄2 teaspoon of the salt and the pepper in a cup; sprinkle over the tomatoes.

Melt the butter in a medium skillet over medium heat. Brush a little butter over the cut side of each tomato, leaving some in the skillet. Bake the tomatoes, uncovered, until they are hot, begin to soften, and look juicy on top, 20 to 25 minutes.

Meanwhile, add the scallions and garlic to the butter remaining in the skillet. Cook over medium heat, stirring often, until the scallions are tender, about 2 minutes. Add the bread crumbs and cook, stirring, until lightly golden and crisp, 3 to 5 minutes.

Scrape into a medium bowl. Mix in the parmesan, pecans, and remaining 1⁄4 teaspoon salt.

Spoon some of the crumb mixture atop each tomato half. Bake until the crumbs are browned and heated, 10 to 12 more minutes. Serve hot.

— with permission from “Tomatoes: A Savor the South Cookbook” by Miriam Rubin (University of North Carolina Press, April 2013, $19)