I couldn’t figure out why my son was laughing at the Minecraft video he was watching; it looked like torture to me. I found out later that the videos have narration, though to be honest, that didn’t change my opinion.

This. This is what my fifth grader is obsessed with. Watching instead of creating. And he isn’t the only one.

He’d be glued to that screen all day if we let him. As he made his breakfast, wearing his headphones and holding his hand-me-down, WiFi-only smartphone, I had to stop him and tell him to put the phone down. Harry Potter himself could appear in front of him and he’d barely notice.

We don’t need magic to make our son upset. All we have to do is threaten to take away his screen time privileges, which are already controlled. He’s only allowed one hour per weekday, with an extra hour on weekends, and his chores, work and musical instrument practice take priority.

Everyone has different rules. Maybe some will change due to the American Academy of Pediatrics (AAP) modifying its screen time recommendations. Initially, screen time was discouraged until age two, but this policy was announced in 1999 before the release of the first generation iPad and apps aimed at young children. 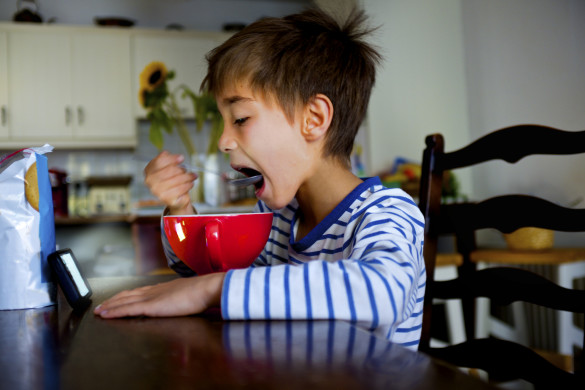 The new policies are expected to be announced a year from now, but the types of screens kids are watching are definitively changing. According to a Zero to Eight survey on children’s media use, 38 percent of all kids under two had used a mobile device in 2013, compared to only 10 percent in 2011. Imagine what that number would be today. The study also found that traditional screen time is down, but mobile screen time is up. The Pew Research Center says nearly three-quarters of teens have or have access to smartphones, with 24 percent saying they go online “almost constantly.”

The current AAP recommendations are that parents establish screen-free zones at home, and limit entertainment media for no more than “one or two hours per day, and that should be high-quality content.” The idea now is that instead of less than two hours of screen time a day, limits be set on recreational screen time, and to keep everything in moderation.

When my son has used up his screen time or has it taken away, he reads or finds creative ways to occupy himself. One morning when he was without his phone, he remarked that he got everything done quickly and still had time before school. He knows that spending time on his phone is a veritable black hole.

He most certainly doesn’t want to hear how lucky he is to be growing up with today’s technology. Eye-rolls invariably will ensue when we refer to the ancient days of our childhood. No walking through the snow barefoot uphill both ways, but close enough by today’s standards.

The overall message is that while technology keeps changing, parenting has not, says Dr. Ari Brown, chairman of the AAP’s group investigating media use.

He can laugh at Minecraft videos for now; I want him to enjoy being a kid while he can. However, he’ll mysteriously run out of screen time the next time he wants to give a Minecraft tour.