Maybe it’s the old newspaper reporter in me, but I am always on the lookout for stories. When broadcast news unfurls a national story into my living room, I often apply a clinical eye to the coverage. But the rescue heard ‘round the world riveted me on so many other levels. The discovery of three women held captive for nearly a decade smack dab in the middle of a Cleveland neighborhood trumped anything in my memory.

For one, it’s so rare that missing women are found alive. That the media seems so inclined to keep mentioning the socio-economic class of the neighborhood is mystifying. It’s completely irrelevant, as their strictly human reactions play out on television. Stunned by the discovery, I’ve found the residents of Seymour Avenue to be utterly natural and clear about how they feel. In dozens of interviews acquaintances and neighbors are literally wide-eyed. They are untarnished and raw as they display for the world their combination of self-reproach and astonishment. I just wish we all weren’t so astonished. True, the beast was operating in plain sight, enabling the perfect crime. But, isn’t it odd to anyone, especially the police, that a house has all of its windows covered up? It seems so obviously off-kilter, I wonder why this wasn’t considered suspicious by its own accord. Then again, in Mt. Lebanon, a hybrid of income and education levels, we have properties in similar condition scattered among the tree-lined streets. What lurks within?

One guy who may not have noticed the blocked windows gets a lifelong pass though. He is of course, Charles Ramsey, whose unabashed conveyance of the story to hordes of stiff, seemingly unimaginative reporters provides a gallows humor to a dreadful situation. Ramsey may be an FCC quandary, but his unfiltered nature was the very reason he ended the nightmare of three women. To him it was simple: he heard screaming and came to the rescue. In under a minute he aided and abetted a rescue without a thought. He hasn’t mentioned to date if it crossed his mind that he could’ve had his head blown off, as he had no idea what the ruckus was. The straight shooting Mr. Ramsey is being labeled a hero. This is especially good, because that is what he is and we need to take note.

We tend to throw around words like “hero” quite a bit in contemporary culture. When I was growing up, heroes were people who did courageous acts out of the ordinary. Not as part of a job they accepted or signed up for, but for reacting to a sudden situation that erupts out of a normal moment. This is in fact what Mr. Ramsey did and for that he meets my definition of a hero. Too often, heroism or even intervention eludes us.

In college I studied sociology. Among many of the human conditions we learned about was that of the bystander doing nothing. A famous case from 1964 was part of our curriculum. Kitty Genovese, a young woman residing in a cozy neighborhood in New York, screamed at the top of her lungs while being stabbed to death. Many people later admitted to hearing her and not one came to her rescue. Her killer even left and had the audacity to come back to continue his gruesome crime. She died on the ground outside of her apartment. In a newspaper story, the situation was described like this: “For more than half an hour 38 respectable, law-abiding citizens in Queens watched a killer stalk and stab a woman in three separate attacks in Kew Gardens.” They didn’t want to get involved, the story said. It was labeled Urban Apathy.

It’s my belief that the people of Seymour Avenue did not suffer from apathy. Their crime was attending to the nuances of their lives. As close-knit as they seem, like all of us, their own kids, jobs, marriages, divorces, deaths, celebrations and situations distracted them from one another. They’ve mentioned the oddity of covered up windows, but because we are taught to mind our own business more than others, they did what most people do: nothing. 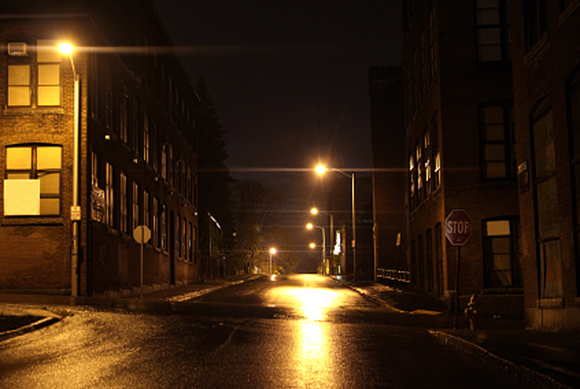 I would wholeheartedly support a law against boarding up windows or completely disguising a yard. Or, why don’t we loosen up the laws, so that the police can knock on your door if something looks askew? If you have nothing to hide, what’s the difference? Would you rather nefarious things thrive so that you can cling to your personal space? Nobody would suffer if we allowed authorities more or easier access to our homes. This is a seething point, I know. But is it such a stretch to all agree that a neighbor with completely disguised windows and doors is a little scary?

The women nearly rotted for 10 years while life bustled on outside. In less than a minute, according to reports, Mr. Ramsey ended that captivity by his simple gut reaction to something clearly wrong. We should all study this case very closely and take away some lessons. Knowing your neighbors is not enough. If you feel in your gut that something is wrong, contact the police and insist they take action. If for whatever reason they don’t react, you react. I cannot recall an instance where a person intervened in a bad situation and suffered for it.

The story of the Cleveland women and their rescue is far from over. While sordid details of their captivity will inevitably seep out like a wound, we should stay focused on the actions and reactions of the neighbors. Let’s vow to hold Mr. Ramsey in high  esteem. Maybe we ought to think less and do more. Mr. Ramsey didn’t stay on his porch ruminating while finishing his infamous Big Mac. He acted in 60 seconds with a total lack of consideration and in doing so exposed one of our worst human crimes: apathy.