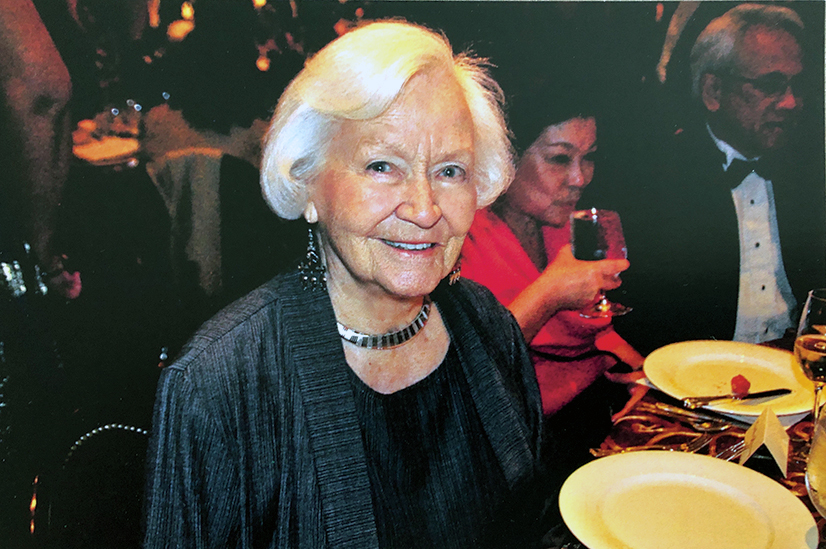 That quote could easily have come from Mary Larsen, Mt. Lebanon’s first elected female commissioner, who died in March at age 97. She would never claim to have done anything great.  That was not in her nature, say the people who knew her best, who describe her as unassuming, gracious, the first to credit everyone else on the projects she worked on, and happy to show up, roll up her sleeves and get things done.

Most of all, she was proud to call Mt. Lebanon her home. “She loved this community,” says her daughter, Anne Noland, of Glenridge Lane. “She was so proud to live here. Even at the age of 97, she never grew old. Her humanity, her zest for life, were still very much in evidence, right up to the end. Most of her life was spent working to enhance the community she loved.”

For those reasons and more, the Mt. Lebanon Community Relations Board selected Larsen as its Volunteer of the Year for 2020. Her family will be recognized at next year’s volunteer appreciation dinner.

“Mary Larsen was an inspiration to several generations of Mt. Lebanonites—the kind of person many of us strive to be,” says Community Relations Board Chair Lisa Borrelli Dorn.  “Mary’s calm presence, warm sense of humor, honestly, humility, and ability to listen without  judging made her a friend to everyone she met. Her legacy to Mt. Lebanon is her work ethic, her optimism and her belief that people of various points of view can work together to find solutions. Mary uplifted our community and and enhanced our lives.”

Larsen served two terms as a commissioner, from 1977 to 1985. Her contributions have woven themselves into the tapestry of Mt. Lebanon so seamlessly, many could scarcely imagine this town without the soccer field in Bird Park, or the tennis courts, or the ice center in Mt. Lebanon Park. But these were once ideas, voted on, made into blueprints and built and all bear her fingerprints as a member of the recreation committee that
created them.

Next to engaging in projects, and discussing local issues and concerns, she loved people and learning new things, her family and her faith, not in that order. “She had so many interests,” says her friend Nina Helbling, Washington Road, who egged her on to help start the Mt. Lebanon League of Women Voters in 1958. It later folded into the Pittsburgh League, the largest in the state.  “She was a good person, very kind, and made friends easily, but not frivolously,” says Helbling. “She didn’t crave recognition. She just did things.”

A native of Edmonton, Alberta, Canada, she enjoyed traveling. One of the high points of her young life, one that she always loved to talk about, was her first trip to Europe.  When she was 13, just before World War II, she accompanied her engineer father to Europe for a series of conferences. They traveled to Belgium, France, Switzerland, and ended up in London the day before war broke out between Great Britain and Nazi Germany, and made it out the very next day.  Travel meant excitement to Mary; she and her husband Harold, daughter Anne and son Peter, saw many places outside the U.S. and later, she and Harold were avid Elderhostel travelers (Elderhostel is now known as “Road Scholar.”)

Larsen was a devoted member of the Church of Christ, Scientist, on Washington Road. Her faith was an important linchpin in her life, says Anne. At a time when it was rare to see a woman taking an active role in church services,  Larsen was a reader for the church back when there was standing room only and people would be lined up outside the door. The church has been sold, but served as a Ward 5 polling place, where, naturally, Mary served as a judge of elections for years.

Former Ward 5 commissioner Kelly Fraasch became friends with Mary at one of the not-so-secret “Women Only” gatherings for municipal public servants past and present, for conversation and collegial support. Former commissioner Barbara Logan introduced Fraasch to Larsen at a holiday luncheon, and they became fast friends. “She was quick to shake my hand, and we sat next to each other. We laughed and laughed the whole time,” she recalls. Fraasch and Larsen would share rides to municipal-related events and gatherings, where Mary continued to look out for the freshman commissioner. Mary was gracious, to be sure, but she was no shrinking violet, says Fraasch. “She didn’t hesitate at all to share her opinion. But she would give it in such a kind and eloquent way that you wouldn’t realize that she was actually disagreeing with you.”

“She was a velvet hammer; just a couple light taps, and everybody would perk up and listen.”

A two-term president of the Pittsburgh League of Women Voters, Larsen was honored with two civic recognition awards, and would receive a third in late March: membership in the Pennsylvania Women’s Hall of Achievement for her work with the League. Larsen’s pet legislative project was ambitious: she wanted to reduce the size of the Pennsylvania General Assembly.

Good government and civic education for everyone mattered to Mary Larsen, and she devoted her considerable energies to both.

Ward 3 Commissioner Leeann Foster was astonished to see Larsen at this year’s graduation ceremony for the Mt. Lebanon Residents Academy, an eight-week program open to residents to show them the inner workings of their municipal government, and a program that Larsen championed  into being.

“She was more interested in hearing about my experiences than focusing on her own,” says Foster. “That sums up who she was: selfless, passionate, engaged. We were lucky to have her as a commissioner and as a resident.”

“If you don’t make sure the government runs properly, your quality of life will dissipate,” Larsen said in a 1996 Mt. Lebanon Magazine article honoring her with an award for her accomplishments and interests, including hosting dinners to welcome visitors on behalf of Pittsburgh Council of International Visitors (PCIV), an activity she delighted in.

She was learning how to make government better and fairer at a gerrymandering presentation at the Mt. Lebanon Public Library, where she fell on the steps. She passed away at St. Clair Hospital two days later with her family at her side.

Which accomplishment would have made her most proud?

“Well, she was Canadian, so she loved ice skating,” her daughter said. “Seeing her great-grandson skating on the ice rink. I think. She would have been really tickled by that.”