Mt. Lebanon’s brewpub is having over Carnegie’s meadery, and you’re invited to come, too, and learn what a meadery and how mead is made there.

From 7 to 9 p.m. Wednesday, Sept. 17, Hitchhiker Brewing Co., which opened in May on Castle Shannon Boulevard, is presenting Dave Cerminara, who in July opened Apis Mead & Winery on Carnegie’s Main Street. 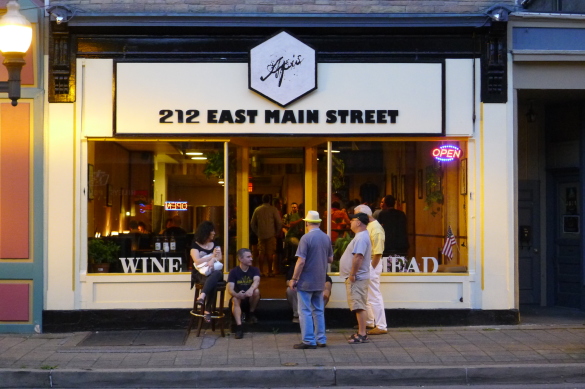 There he makes and serves mead, which is wine made from honey, in a variety of flavors and strengths.

Mr. Cerminara, formerly the cellarman at the North Side’s Penn Brewery, will tell the story of how he got into mead and will pour flights of his so you can try it.
Hitchhiker’s Gary Olden says the plan is to serve 4-ounce pours of three meads — Cranberry Clove, Blackberry-Raspberry and one more to be announced — for $15.
This cross-pollination is just the beginning of collaboration between the two South Hills beverage businesses. Starting that night, Mr. Olden said, “We will have Apis Pineapple Hop on tap,” and in November, Hitchhiker and Apis will host a PA Brew Tour, which they plan to reprise early next year.