They had me at first bite.

As I made my way down the sidewalk on Beverly Road, I knew I was in for a real treat. The smells wafting through the air from MoonLit Burgers’ pop-up shop were incredible.

Inside 306 Beverly Road, io Deli was transformed into a takeout burger destination.

With the deli closing at 3 p.m. on Saturdays, the space was perfect for business partners Mike McCoy and Derek Stevens to open a weekly pop-up, bringing their delicious smash burgers to the South Hills. MoonLit Burgers will return this Saturday, March 20, after a short hiatus. They’ll be open 5 to 9 p.m. You must place your order online, in advance.

“I grew up in Southern California. I have family out there and I get out there quite a bit. In Los Angeles for the last couple of years, there’s been—for lack of a better word—a smash burger movement,” McCoy said. “Having gone out there and eaten these burgers, I was like, ‘You know what, I think this would translate well to Pittsburgh.”

Both McCoy and Stevens have been involved in the restaurant industry for much of their lives. In 2004, they became friends while working for big Burrito Restaurant Group, where they helped open Eleven in the Strip District.

The two have talked over the years about launching their own establishment. Last August, they decided to open a pop-up, similar to ones they’ve seen in LA. Their first smash burger pop-up was located at Millie’s Homemade in Shadyside. And they wanted to keep going.

Early this year, they started chatting with longtime friends Jeff and Carol Iovino, owners of io Deli and Cafe io in Mt. Lebanon, about opening a pop-up at their establishment on Saturday evenings—since the deli closes early that day. By February 6, the business partners were flipping burgers inside the deli.

The only advertisement came from social media and word of mouth. They had no idea what to expect.

People apparently loved it. Within two and a half hours, they dished out 400 burgers, with a line of socially distanced people waiting on Beverly Road. Since, they’ve moved their orders to online only pre-orders. For the two additional weeks they hosted pop-ups, they also sold out. 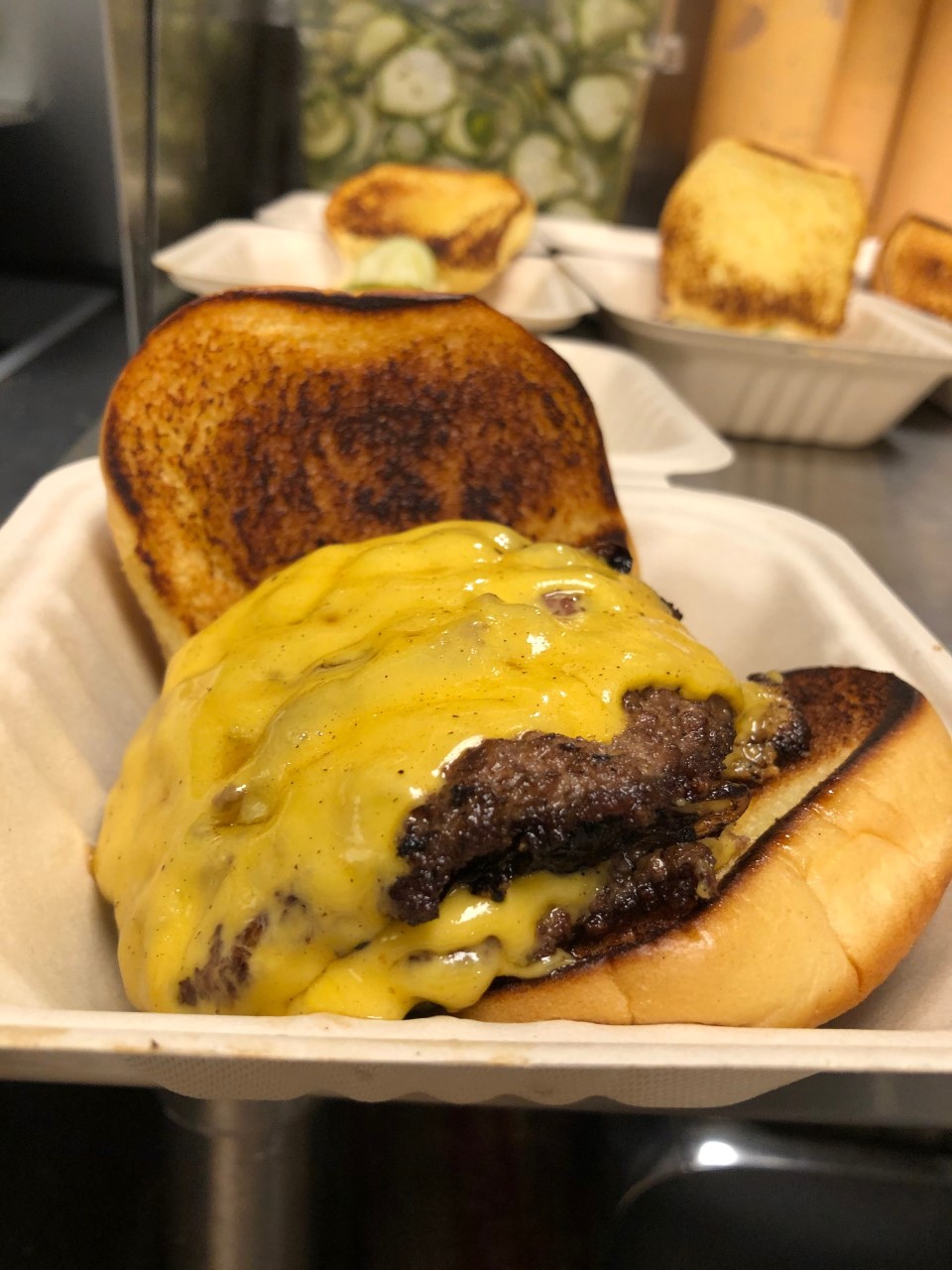 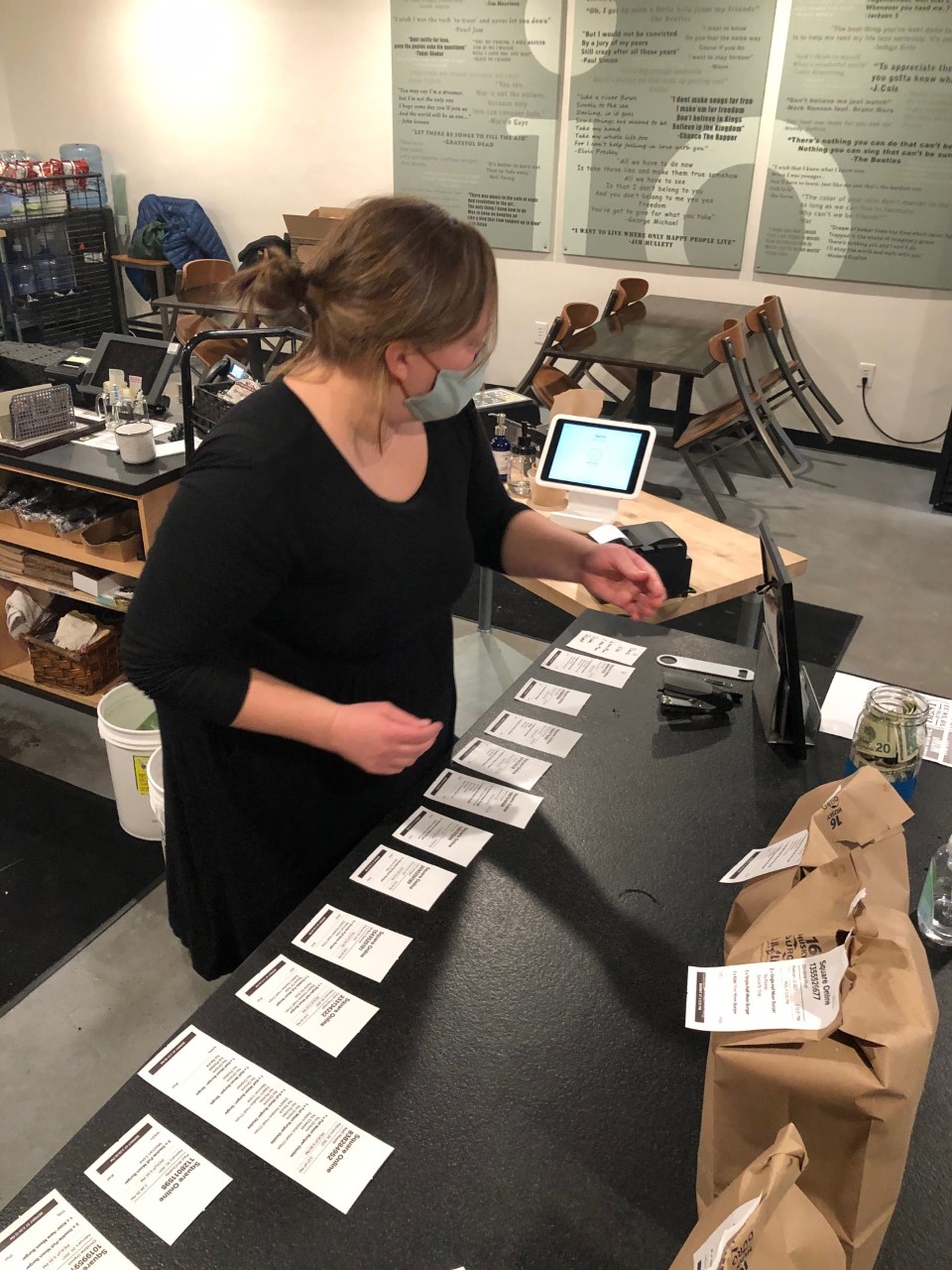 MB 3
MoonLit Burgers sold out all three weeks that it was open at 306 Beverly Road. 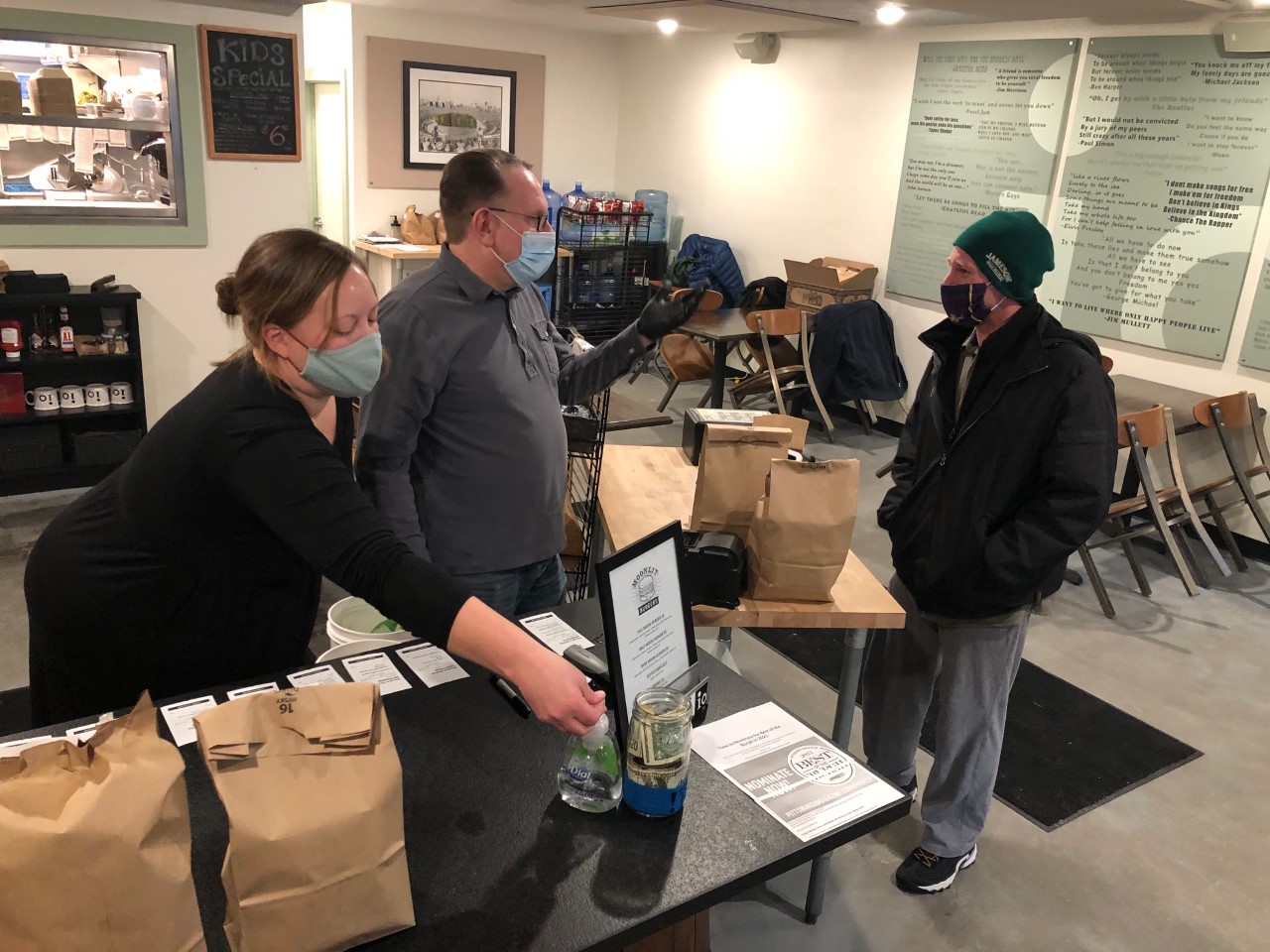 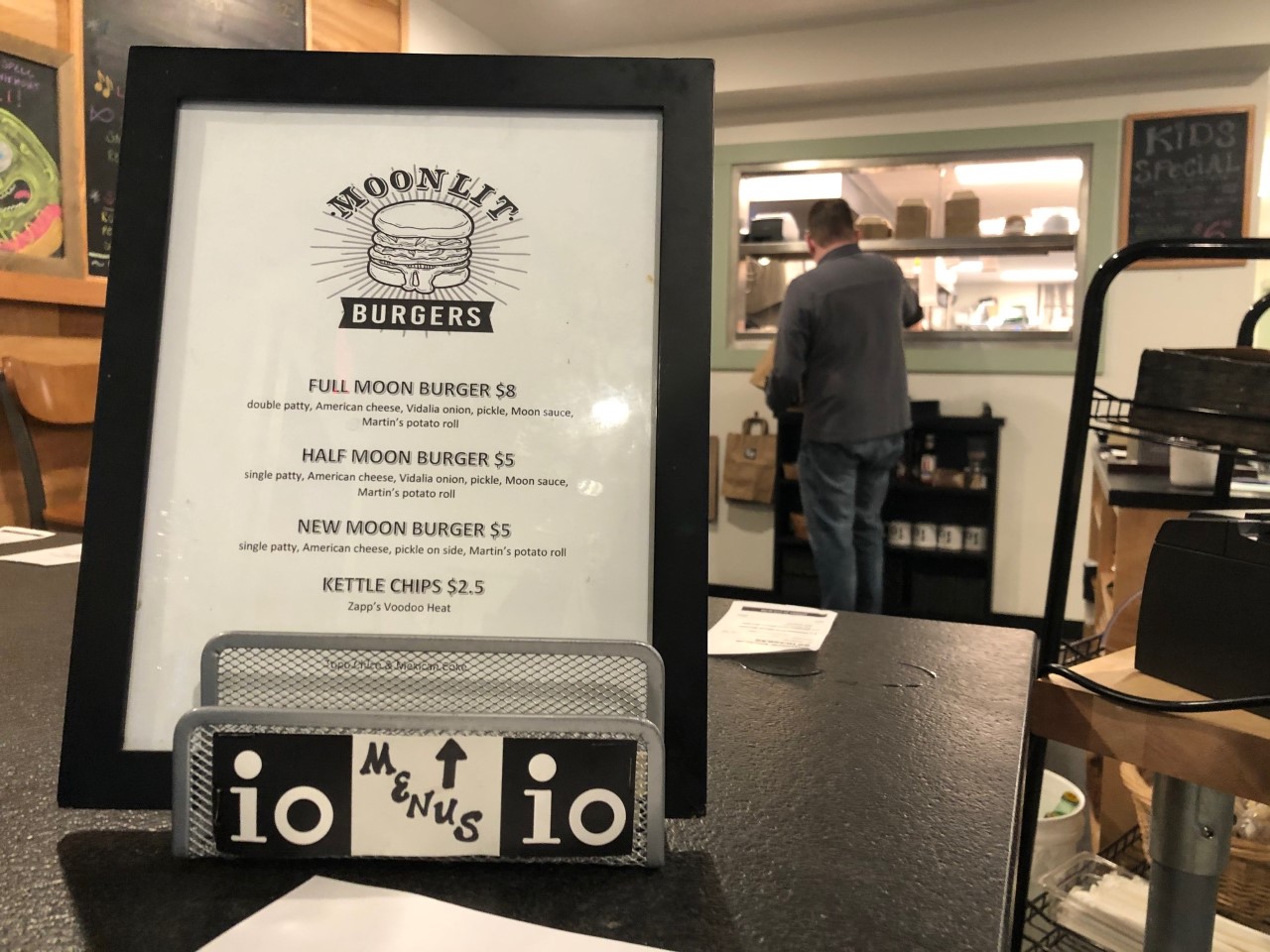 MB 6
The menu at MoonLit Burgers. 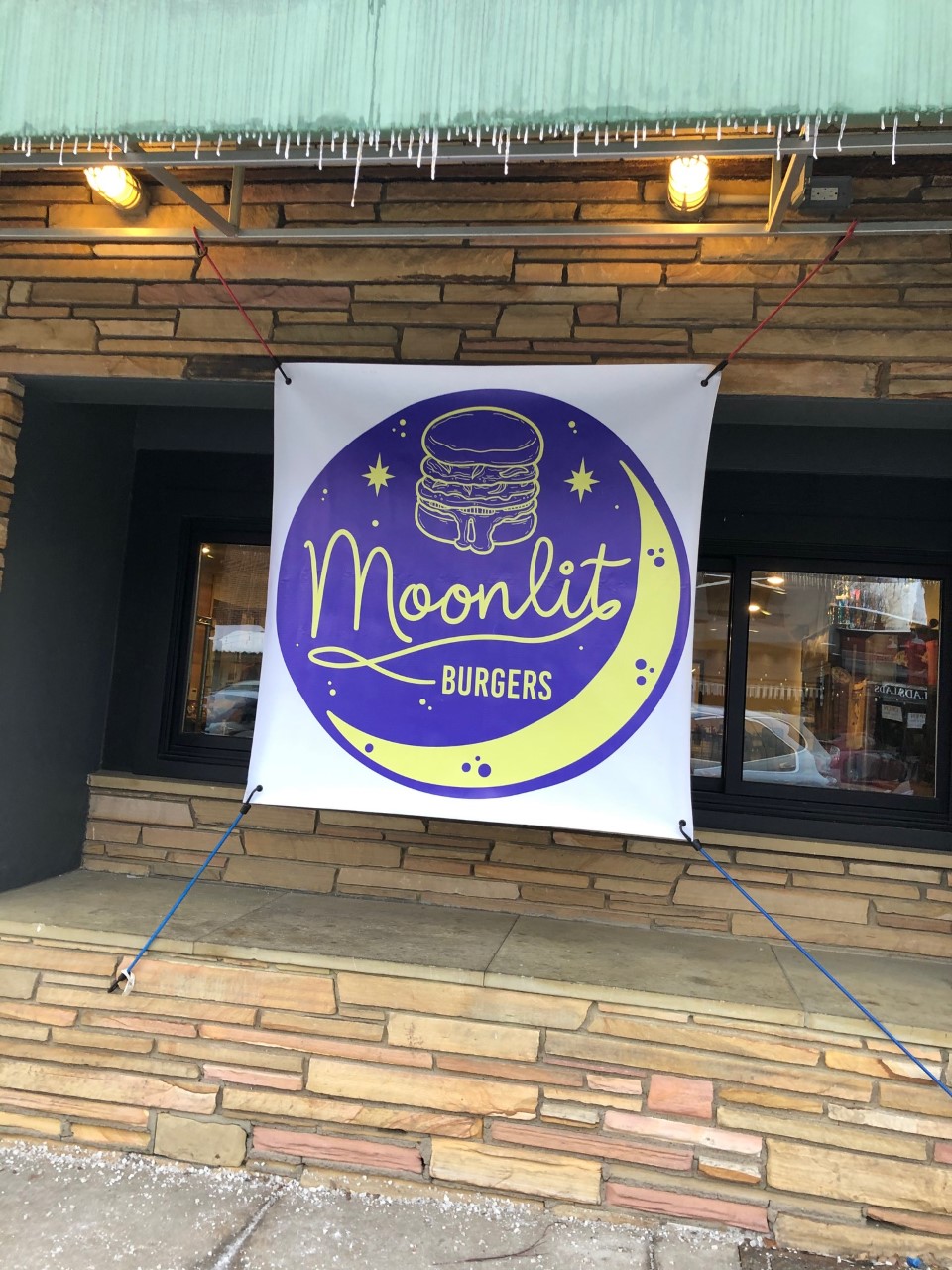 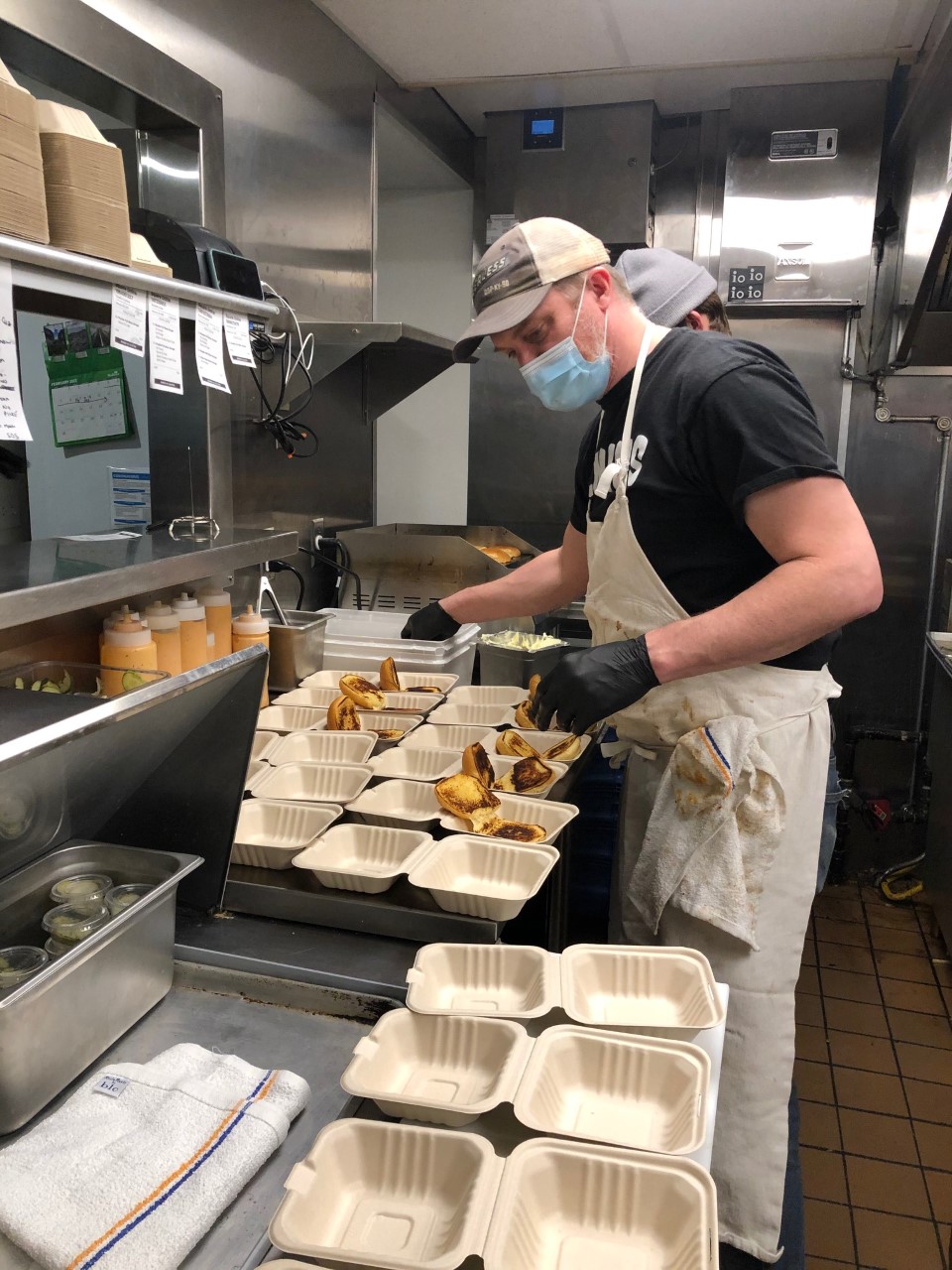 What makes their burger special is that it starts out as a meatball. They add seasoning, put onions on top and quite literally smash the burger onto the skillet.

I chatted with some folks waiting in line who couldn’t wait to try the burgers.

Kayleigh Crowe and Ken Perry came from Mt. Washington, after learning about MoonLit through social media.

“We both really like In-N-Out burgers,” Kayleigh said. “It’s great to have this here!”

Dan Gissin, Overlook Drive, also was excited to give the burgers a try after a friend from Canonsburg sent him photos of the burgers from Instagram.

“They look delicious. I’m sure I’ll be back,” he said.

So, I’m sure you’re wondering what the burgers taste like. My brother-in-law and I did a taste test, and these burgers certainly had us giving a thumbs-up. Even my sister’s cat, Calla Pi, wanted a taste (Don’t worry, I kept her away! I wanted this burger all for myself!)

The Martin’s Potato Roll was soft and squishy, just like McCoy said. The flavors of the American cheese, onions and pickles combine perfectly in your mouth for a great burger experience (Yes, I’m drooling just thinking about it!)

They took a few weeks off for personal reasons, but they’ll be back serving burgers this Saturday! Unfortunately, if you didn’t already place your order, you won’t be able to get one just yet. They sold out again, within hours of posting about their return on social media.

McCoy and Stevens hope to someday open their own brick-and-mortar establishment. They would like to land somewhere in the area—possibly even Mt. Lebanon. “The support here is great,” McCoy said.