When Todd Pritchard first became a paramedic several decades ago, ambulance crews frequently used medical anti-shock trousers, a type of balloon pant inflated on patients on the way to the hospital to keep them from going into shock from loss of blood. But the medical profession later realized the pants increased the patients’ blood pressure, which actually made them bleed faster.

Medics also routinely strapped injured patients onto long, hard backboards to reduce spinal motion. But in the last three years, researchers debunked the benefits. In fact, restraining patients, especially senior citizens, on a rigid board increased their discomfort and ended up causing more problems. Better to allow them to lie comfortably on a cushioned stretcher.

Those are just two changes in the dizzying pace of emergency medicine. Since Pritchard joined Medical Rescue Team South Authority (MRTSA) as a volunteer in 1985 through his position now as MRTSA chief, he has seen many such reversals. And as the authority celebrates its 40th year of operation, he can foresee what lies ahead for patients, medics and insurance companies. 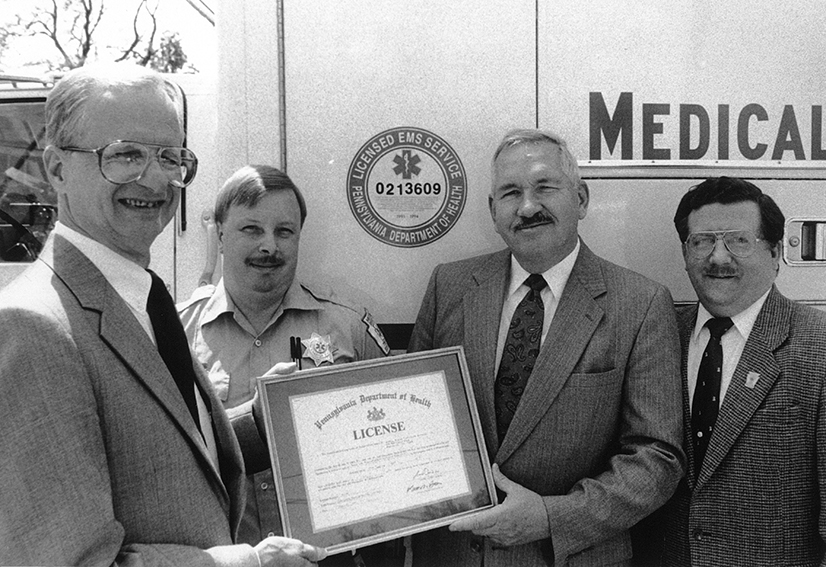 “I think the way we deliver emergency medical services is going to be completely different down the road,” he says.

Emergency help often comes in public. Everyone sees the firefighter response when a building is on fire. Police make traffic stops and other arrests in plain view and place the information on the Internet. Police and fire work sometimes involves harm to humans, but often it’s buildings and possessions.

That’s where medical rescue differs. Medics always directly serve people and most times, it is away from view. In fact, sometimes the public forgets what medics do, because patient privacy is critical. “I’d like to think we’re taking care of the most important commodity,” Pritchard says. “We can’t talk about what we do. We quietly go about our business.”

Paramedics and EMTs have difficult jobs, say the administrators of the emergency department at St. Clair Hospital.

“You have 30 seconds to make a connection with somebody who’s having the worst day of their LIFE,” says David Kish, executive director of emergency services and patient logistics at St. Clair. This is all after walking into an unfamiliar environment, possibly in bad weather, maybe even up three flights of stairs. That technician then has to earn the patient’s trust to provide the best care.

Kish says medics in the field are part of a valuable team of caregivers, including the emergency department doctors and nurses. “They’re a phenomenal group of people,” Kish says of MRTSA. 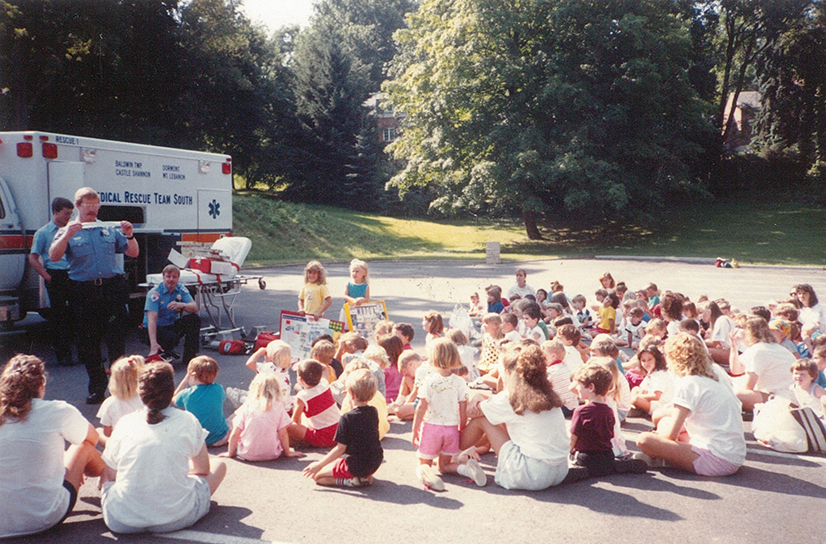 Even if you’re only half-conscious, you can get whiplash from listening to medical advice. Think of the changes we’ve heard over the decades: A little smoking during pregnancy is OK. Don’t smoke at all during pregnancy. Eating eggs will kill you. Eggs are great. Hormone replacement protects the heart. Hormone replacement contributes to breast cancer.

But information, research and data changes even faster at the emergency medicine level. As recently as the 1970s, ambulances were glorified taxis.

When Pritchard was first a medic in the 1980s, ambulance crews didn’t carry much medication—a little nitroglycerin for chest pain, but not much else. They called ahead to the hospital for approval to use anything. Now, the crew can give a full complement of medicines approved by medical director Kristen Seaman, including pain killers, heart rhythm medications and drugs that reverse opioid overdose, all in the field.

They can start an IV. They can restore your airway if you’re having trouble breathing (although increased use of a special breathing mask system, called a continuous positive airway pressure mask, has decreased the need for intubation in some cases). They can reset your heart rhythm with a defibrillator or stop bleeding with special tourniquets.

Data is transmitted to the hospital, and the cardiac catheterization lab is ready to go when the ambulance pulls in. 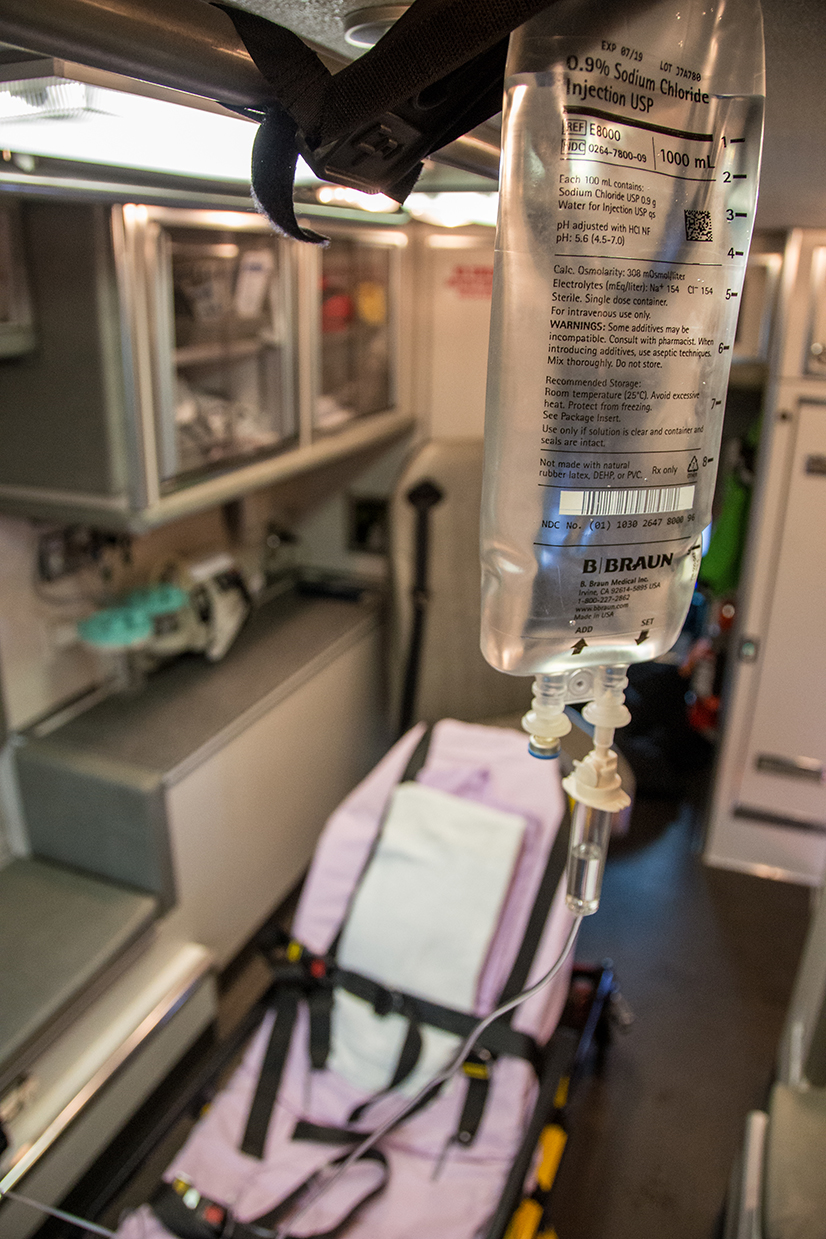 In the near future, Pritchard sees the same sort of coordination for patients with an aggressive life-threatening condition called sepsis. Sepsis will be diagnosed in the field and powerful antibiotics will be ready at the hospital, since the condition progresses swiftly and early use saves lives.

Campbell says EMS personnel are critical in that partnership because they can analyze what looks at first like a simple fall with a forehead cut and take it another step, to identify potentially lethal symptoms—a fever, a high heart rate or breathing difficulties. “[The EMTs and paramedics] are recognizing the signs of sepsis,” he says. “They make us better because of what they tell us.”

That’s an example of coordinating with the hospital, but what if ambulance crews also could partner with patients, general practitioners and urgent care centers, even making house calls on a regular basis?

“I think EMS is a perfect system to create care in the home,” Pritchard says. Community paramedics—medical professionals trained to treat people wherever they are—would be the medical gatekeepers.

Consider the example of a patient who has congestive heart failure, a chronic condition where the heart does not pump efficiently. It’s the top reason why people older than 65 are hospitalized. EMS could visit the home to ensure the patient has been taking important medications and is following a proper diet. They could check vital signs, run an EKG and be a point of contact with the general practitioner.

Perhaps the exam would reveal that the patient needs to see a doctor but doesn’t need to be in the hospital. After consulting with the doctor, the ambulance could return to the station and a MRTSA staffer could drive the patient to the physician’s office in a regular (read: cheaper to operate) vehicle.

In another case, maybe a ride to an urgent care clinic for a quick X-ray after a simple fall would be more appropriate than the ER.

Suppose you have the stomach flu. You can’t keep any fluids in and you’re dehydrated and weak. MRTSA could give you an IV with fluids and the anti-nausea drug Zofran. That may be all the care you need.

The point is to prevent patients from getting sicker whenever possible and to ensure that patients going to the ER truly need to be there.

The challenge in providing care in the home is to change the way insurance companies reimburse for the service. Right now, MRTSA is paid only if the patient is transported to the ER. As it stands, 25 percent of MRTSA’s patients choose not to go to the hospital. State laws that govern emergency medical service would need to be changed and Medicare would need to update its rules to allow reimbursement to extend to non-ER visits. Kish says some community paramedic costs have been handled by grants.

MRTSA Deputy Chief Jesse Siefert says community paramedic care would become part of our “point of sale” society, where the medics have the ability to diagnose and treat the patient, call in a prescription and be the initial gateway to care. 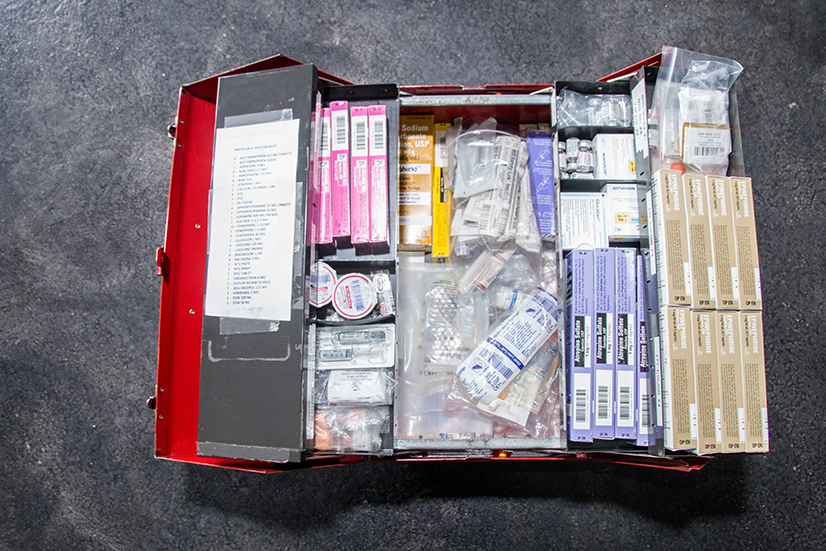 Medical services may be the source of the fastest change in EMS, but other developments are altering the way care is provided.

Active shooter incidents across the country, terrorist attacks such as 9/11 and the Boston Marathon bombing and other disasters mean ambulance crews have to be prepared for anything. Medics are now being taught how to administer care under attack, wearing 35-pound body armor. Ambulances carry chemical-protection suits, face masks and floatation devices for helping during swiftwater rescues. They carry packs for stopping bleeding in large numbers of people.

Education requirements are getting more rigorous.

Medics now tend to have four-year college degrees. Pediatric specialty training is on the rise, all for $7.50 per capita in tax cost.  “We are delivering a very high quality, necessary service at a tremendous value,” Pritchard says.