“The joy of singing” is not a phrase that resonates with everyone, but all people know it nonetheless. It’s no different from “the joy of cooking,” or “wanderlust” or “the love of the game”—for every person, there is something which we are compelled to do because it brings us peace or alters our lives for the better.

Unfortunately, sometimes circumstances can take that “special thing” away from us. It happened to Glenn Broman, Catalpa Place, when he was diagnosed with Parkinson’s disease and was forced to resign from The Bach Choir of Pittsburgh, where he was a member for more than 30 years. As he worked through his diagnosis, however, singing’s role in his life made a shift—from hobby to therapy—because now he sings as a participant in the Parkinson Foundation of Western Pennsylvania’s new Pittsburgh Sings music therapy program. He participates in the program with his wife, Claudia, who does not have Parkinson’s disease, but was happy to lend her voice. The program began September 26 and ran through November.

“Everyone can sing, but Parkinson’s makes many people lose the ability,” says Michelle Muth, MT-BC, a professional music therapist leading the Pittsburgh Sings program. “This helps make singing possible for them again… Group singing can really help with the isolation. And you can improve symptoms of Parkinson’s through singing.”

It’s a tall order for an eight-time, 90-minute class, but the results show that the goals weren’t unrealistic. In Muth’s final report back to the Foundation, she noted measurable improvements in each area as well as “a strong sense of community … and a spirit of camaraderie that evolved from week to week.”

If you sit through a class, you are immediately struck by the results-driven and instructional nature of Muth’s program. Though the goal is to eventually form a “Parkinson choir” similar to the national Tremble Clefs program, the session is less like the traditional SATB choir rehearsal, and more like an overall music, movement and wellness class.

The session began with a series of simple questions from Muth: “Whose energy is at a good level?” “How’s your spirit?” “Who is in a good mood?”

She made her way around to each of the seven participants in attendance that day and recorded their responses to the questions. She next recorded the results of a breath support exercise, which involves taking a deep breath and letting it out on an “sssss” sound for as long as they could. It was only the second week of the program, but one participant with Parkinson’s already was able to sustain the sound for 19 seconds. Breath support exercises are commonly used as warm-ups for singers to encourage stronger breathing techniques, and in this case, Muth was using the exercise to measure “improved respiration regulation” over the course of the program. 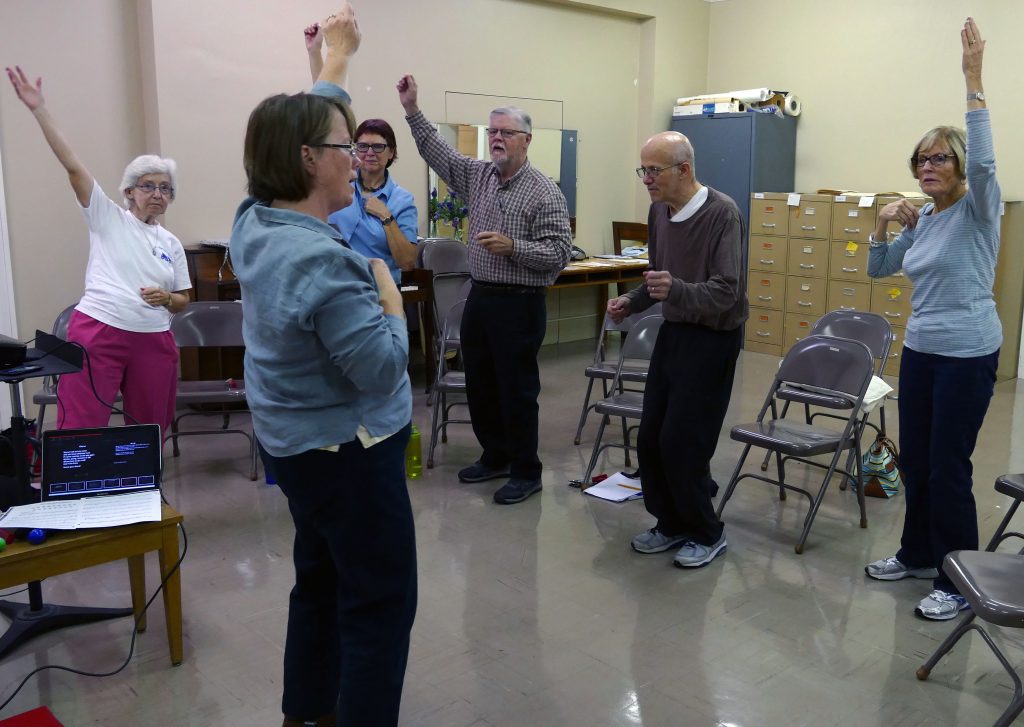 Stretching and vocal warmups followed, and then they started working on the songs that Muth had selected for the day. They sang popular favorites such as You’ve Got a Friend, Na Na Hey (Kiss Him Goodbye), Let it Be and Hound Dog, which elicited quite a bit of attention for the support dog in the room, who was sleeping quietly at her owner’s side.

Muth accompanied on guitar for most of the songs, but directed them to rehearse a cappella when they got off-tempo. She played the recorded version of Saturday in the Park to teach the participants some movement exercises, and for each song, she taught them to accompany themselves with different percussive instruments.

“Parkinson’s affects the brain, and so does rhythm,” said Muth, “The brain wants to focus on patterns, and rhythm gives your brain a pulse, a pattern focus on.”

Participants Judy and Ann (we are withholding their last names for privacy) relayed their experiences with this musical benefit to the class. “It’s good to just sing when you freeze up. It gets you moving again,” said Judy. Ann agreed, “I sometimes get caught up in store parking lots, and I like to sing when this happens. Don’t worry about people hearing you do it,” she said. “People hear me and think I’m nuts, but it really does help!”

At the end of the class, MJ Meenen from the Parkinson Foundation of Western Pennsylvania asked the group if they would perform a song at the organization’s Living Well Annual Conference on Saturday November 5 in Greentree. Here is a short clip:

“We [were] happy to ask them,” said Meenen, also a Mt. Lebanon resident, “It’s nice to feature people who are active in your own community, not just the experts.”

Three hundred people attended the Living Well Conference, a popular event that provides resources and activities for people to help manage Parkinson’s Disease while living a balanced life. The keynote speaker was former Pittsburgh Pirates player Dave Parker, who was a member of the team when they won the ’79 World Series and is currently living with Parkinson’s disease. Also featured was Dr. Michael Zigmond, Professor of Neurology at the University of Pittsburgh.

The Parkinson Foundation of Western Pennsylvania offers many such programs and events throughout the year. In fact, the Bromans also attend twice-weekly yoga classes sponsored by the Foundation at Sterling Yoga in Dormont to help Glenn with his balance and movement. “The Foundation really keeps you up-to-date on research and programs, and they make classes as inexpensive as possible,” says Claudia.

The fall session of Pittsburgh Sings was funded by the Cahouet Center for Comprehensive Parkinson’s Care, and it was essentially a pilot study to see whether a music therapy program for Parkinson’s would be viable in this area. It has not yet been determined whether the program will get another session in 2017, but the enthusiasm of the class’ recent graduates suggests that they would be up for another round.

“This helps to get back the joy of singing, for singing’s sake,” says Glenn. “There is no one to yell at me for tempos and notes. It’s really about fellowship. And getting out, and getting together with other people to sing.”

For updates about the Pittsburgh Sings program or to learn more about the Parkinson Foundation of Western Pennsylvania, click here.
Related Stories