Rena Antosz, who is only 33 and whose hair is tinted a lovely blue, and her husband, Stephen, 29, are opening their second Blue Canary CoffeeHouse in the former Yogen Fruz space in the Lebanon Shops just over the border in Castle Shannon at 300 Mt. Lebanon Boulevard.

The couple run the Blue Canary CoffeeHouse on Druss Avenue just outside Ambridge in Harmony, Beaver County, not far from where they live in Baden.

That place recently created a lot of buzz by serving “nitro coffee”  — cold-brewed coffee that is kegged and then pressurized and poured with nitrogen gas for a lightly effervescent effect that makes it look like beer. In fact, one variety is flavored with hops.

Blue Canary also known for using its own housemade syrups and sauces, everything from chocolate and caramel to pumpkin. “This fall,” she says, “I’m working on spiced apple.”

The couple say they’ll offer the same full menu of hot and cold coffee drinks – made with Nicholas Coffee – teas, some pastries and more at the new space, which they’ve been remodeling with an epoxied wood counter, funky light fixtures and more.

They plan to have five taps – two dedicated to nitro coffees, one for still cold-brew coffee, and the other two for seltzer and housemade soda. They plan to offer tasting “flights” of several artisan sodas. 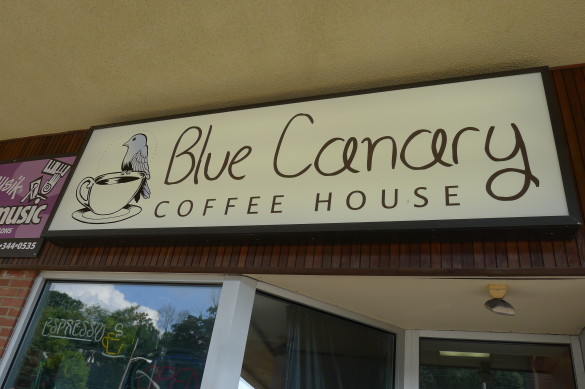 They’ll also offer serve an array of smoothies, made with actual fruit and other real ingredients, as well as Perry’s ice cream.

“We only have four flavors of ice cream in Ambridge,” she says. “We should be able to have 10 or 12 here,” because they have more freezer space.

They plan to cover the walls with artwork, much of which will be for sale. They also may offer art classes in the new space. The hours will start out as 6 a.m. to at least 6 p.m., probably Monday through Saturday.

They might sell blue-canary night lights at some point, too.