“Well, first I have a question … are the pierogies homemade?” I ask bashfully. I hate being that person at a restaurant.

The waitress lowers her voice and looks around to make sure no one is listening, “No. I mean, they prepare them well—sautéed nice with butter and onions—but we don’t make them here.”

“Understood,” I reply before placing an order for my second choice. Don’t get me wrong, I love what Mrs. T’s has done to popularize my favorite food, but this is Pittsburgh. We hold our pierogies to a higher standard (no offense to the missus).

I have this conversation any time I see pierogies on a menu or advertised at a fish fry or festival. It doesn’t matter what I’m actually hungry for—if the pierogies are homemade, I will order them 100 percent of the time. And if they’re not, why waste the calories?

A couple of Christmases ago, I had a serious hankering for homemade pierogies. After a quick search, yielding no nearby options, I realized there is no excuse to go without homemade pierogies, when I can literally just home-make them in my kitchen. Sure, I had heard they were difficult to make—after a failed attempt decades ago, my mother accrued a list of people she knew who could make a good pierogi—each of whom she would pay handsomely for a batch. And being realistic, I had no expectations that my millennial cooking skills could hold a candle to my Aunt Sonya’s Polish neighbor’s, or my mom’s dear friend Diane Seile’s (who sadly passed away two years ago. I cherish her pierogi recipe but feel I am not worthy to use it), or those adorable, generally older, ladies you see cheerfully kneading dough at church, who have been making the delightful Polish dumplings for 50 years or more. 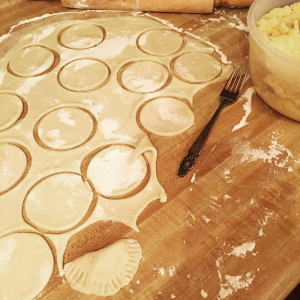 But I thought, even if the end result is passable, it would be worth the time.

Thus began my pierogi-making experiment. Rather than bore you with the details, let’s talk results.

My pierogies were more than just passable—they had serious clout. And I don’t think it had anything to do with my cooking. The credit, I believe, goes first of all to the recipe. After much research, I landed on AllRecipes’ “Grandma’s Polish Perogies” because the ingredients seemed to have the potential to achieve my kind of pierogi—simple, doughy, moderately stuffed.

The versatility of the dumpling should receive some credit here as well. When I was in college, there was this one Polish student (whose name I sadly can’t remember), whom I would often wind up talking to at parties. The language barrier was sometimes difficult, but our enthusiasm for pierogies united us. One time, we talked for at least a half hour about the pierogies her family makes. In addition to your standard potato and sauerkraut, they used cottage cheese, pork, pudding, berries they picked in the woods—pretty much anything you can stuff in the dough.

It gave me the confidence, while embarking on this pierogi journey, to deviate slightly from the recipe when it came to the filling (I didn’t dare deviate on the dough). I minced and fried some onion and garlic, added a ridiculous amount of salt, pepper and other spices, and probably doubled the amount of cheese called for in the recipe. I performed regular taste tests between each addition to ensure I got the filling I was craving.

Speaking of craving—please note that it takes two to four days before you can actually indulge. The top reviewer recommended making the filling the day before. The recipe recommends freezing the pierogies before boiling and frying. So this is how I did it: Day 1) Make the filling; Day 2) Be prepared for a lot of time in the kitchen: Make the dough, stuff the pierogies and freeze in portions; Day 3) Boil a portion, fry it and eat! I bet you could do it in one day, if you factored in the freeze time. You could probably also extend it to four days—by making the dough on its own separate day—to spend less time in the kitchen on the pierogi assembly day.

I realize how complicated that sounded, but the whole point I’m trying to make is that it’s really not. It’s time-consuming, not difficult. And luckily, one batch generally yields seven or eight dozen (at the size I make them, anyway), so a properly frozen batch can last a long time. Since that first glorious pierogi-making experience, I’ve probably made four or five batches in order to keep my freezer continuously stocked. Each batch has been slightly different, slightly better, than the last. I assure you that you do not need any special cooking skills—just a lot of patience and pierogi passion.